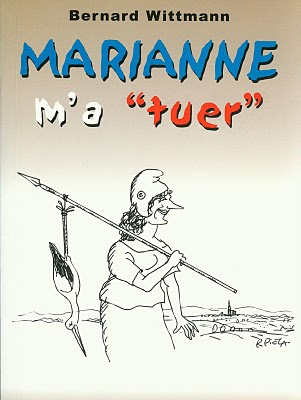 Recently I read a book by Bernard Wittmann titled: Marianne m'a tuer. According to the critics I actually expected a book about the history of the Alsace but instead read how governments in Paris had subdued and still tuent (kill) - according to Wittmann - the Elsassdütsch. This German-Alemannic dialect spoken by the local population is choked to foster (or force) the French language.

Bernard chose the book title - it surely is the most interesting part - for publicity. At the origin is a well-known catch phrase in France: Omar m’a tuer. (Omar has killed me).

Living in her villa in Mougins, South of France, a distinguished widowed lady employed a Moroccan gardener called Omar. One day in June 1991 she was found stabbed dead in her cave. On the door written in blood the police read: Omar m'a tuer. The gardener was arrested and indicted for murder. Soon the prosecutor was in a dilemma. How is it possible that an educated old lady writes such a grammatical blunder: tuer instead of tuée?

A similar mistake is neither possible in English nor in German. In these languages there is a distinct difference between the infinitive and the past participle of a verb, i.e. kill and killed or töten and getötet. In principle the same is true in French. However the pronunciation of tuer and tuée is exactly the same and uneducated Frenchman and -women are known to have difficulties choosing the correct grammatical form. But if the educated lady did not write the grammatically incorrect phrase with her own blood had there been a third person putting the blame on an innocent Omar?

Fact is, the 5000 francs the victim had kept at home were gone and Omar had been in need of money as he had gambling debts. On the other hand Omar had an alibi for the time of the murder. To make a long court case short he was condemned in 1994 for first degree murder to a prison sentence of 18 years although Omar was defended by the best council for the defense in France Maître Vergès. Vergès - in his since then famous last words - went back in history reminding the court of the Dreyfus affair: Il y a 100 ans on condamnait un officier car il avait le tort d'être juif, aujourd'hui on condamne un jardinier car il a le tort d'être maghrébin. (Hundred years ago one condemned an officer because he had the flaw of being Jewish, today one condemns a gardener because he has the flaw of being Maghrebian). It is known that many people in France applauded Omar’s sentence in the way as a good friend of mine felt when he once told me: Tu sais Manfred je ne suis pas raciste mais je n'aime pas les Arabes (You know Manfred I am not a racist but I don't like the Arabs). 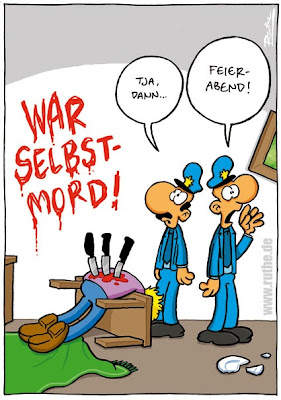 The following cartoon somehow complements the old story or was even initiated by it.

The text War Selbstmord (It was a suicide) convinces one officer while the other shouts: Feierabend !
Eingestellt von Red Baron um 12:00 No comments:

The other day I read an article in the Badische Zeitung about archaeologists digging up a graveyard dating from the Thirty Years War near Stralsund, a German city on the Baltic Sea. The diggers unearthed bones, sculls, lances, swords, and firearms.

This reminded me of Generalissimo Wallenstein’s venture into the north of Germany. Wallenstein is well known for his widely publicized aborted siege of Stralsund. The annual bicycle trip of 2005 together with some former classmates from high school took us into this region along the Baltic coast.


So I was all excited when I discovered written on a map Wallensteins Lager (Wallenstein’s Camp),  a place hidden in the woods.

Eventually, I convinced my fellow bikers to make a detour on our way from Graal-Müritz to Rostock to visit Wallensteins Lager. I was quite deceived when at the magic place there was nothing else to see but an identification plate on a cable box lost in the wilderness.
Eingestellt von Red Baron um 18:31 No comments:

When Freiburgers think that their city is the capital of bicycling in Germany they are all wrong. The place to visit is Münster in Westphalia. Together with my high school classmates I cycled the city and the region in 2006. My parked bicycle on the Privatparkplatz of Der Tolle Bomberg Inn bears witness.

In 2008 Madison's Mayor David Cieslewicz came to Freiburg on the occasion of the 3rd Meeting of Freiburg's Partner Cities. As he had expressed the wish to bicycle in the Black Forest the Freiburg-Madison Gesellschaft organized a cycling tour around the Schluchsee.

In the spring of 2010 Mayor Dave visited the cycling strongholds of Amsterdam and Münster. What happened afterwards Mayor Dave wrote about in an article in the Isthmus Weekly of August 12, entitled In Defense of Madison: Mr. Steve Nass, Republican of Whitewater a Madison-basher, as Mayor Dave calls him, has spent a full two decades in the Legislature. His specialty is to beat up on the University of Wisconsin, but he took time out this spring to issue a press release attacking Madison for installing some pavement markings called a "bike box."

According to Nass, this is just part of the liberal, anti-car agenda. It starts with a little pavement marking and before you can say "euro" we're all sitting in cafes drinking small cups of really strong coffee, wearing berets and talking about Kafka and soccer.

Dear Mr Nass, what is wrong with that? You should know in a global economy there is lots of competition: We Europeans swallow Big Macs listening to the late Michel Jackson on our iPods and sip hazelnut-flavored mocha at Starbucks while surfing the web with our iPads.

Coming back to bicycling ... in Washington. On August 14, the Badische Zeitung published an article about the US Capital. It was mentioned that Mayor Fenty had lately opened a bike path on Pennsylvania Avenue passing the White House with car drivers protesting vigorously as they lost one traffic lane. The city now has 50 miles of bike paths with 30 more to come. Otherwise bikers in Washington live dangerously as drivers chase them off the streets.

There is this subtle difference between Washington and Freiburg. Here it is the pedestrian who is at the mercy of bikers driving on footpaths. Call yourself lucky if bicyclists come the wrong way as you have a chance to escape jumping to the side. If they come from behind and you happen to hear them then stand still and pray, otherwise as I wrote nine years ago: In Freiburg it is impossible not to be hit by a cyclist.


Addendum
I would like to comment on a phrase an American friend recently sent me describing his experience of cycling in the States: When I am in one mode I hate all the others.

I must admit I feel similar: When riding a bicycle I am annoyed by cars and pedestrians. Although at my age I am a most defensive driver, I curse cyclists in front of me and pedestrians crossing the street at any moment whereas as a pedestrian I hate any cyclist on my footpath and parked cars blocking it. What kind of atavistic feeling is unleashed here? Does anybody know the answer?
Eingestellt von Red Baron um 17:57 No comments: