In Freiburg's Münster market six licenced vendors traditionally sell grilled bratwurst at their stands to natives and tourists alike. The Freiburger Long Red (wurst) served with slightly stewed onions in a bun surely is my favorite but you can also opt for a Polnische (is this the same as a Krakauer?), a Krainer with and without cheese and a Thüringer. There is wurst made from veal and cholesterol-poor from Turkey. An orderly market order orders that the order of the stands in the Münster market rotates daily such that each vendor in turn is first in line.
Presently there is some agitation among those traditional vendors as - l'Union Européenne oblige - the precious license must be newly tendered Europe-wide! Imagine some Turks disguised as Greeks selling döner wurst! A scandal? but if it's good why not. But do not be afraid: the German inventive talent does not sleep when dealing with wurst (wenn es um die Wurst geht). In a letter to the editor a tofu producer from Freiburg would like to make the business of his life demanding that one of the future six licensees must be selling veggie wurst.

I don't know about the quality of veggie burgers in the States but those I have tasted in Germany were simply awful. Maybe contrary to the States the ones sold over here contain less salt. That indeed makes them 120% healthy food but uneatable too.

Veggie dogs are also lower in calories, fat, and cholesterol than hot dogs. Some veggie dogs have more protein and iron and less sodium than do hot dogs. Both hot dogs and veggie dogs contain little or no fiber. So what will a roasted tofu wurst served at a vegetarian booth here in Freiburg contain?

In the States they already sell the Veggie or the somewhat speedier Leaner Wiener, the Meatless Frank (the poor guy), the VegiDog and somewhat hotter the Veggie Chili Dog. When you don't like served adults take a Tofu Pup. For all those cat lovers there is a SoyBoy Not Dog on the market. I suppose all this stuff is not roasted so I wonder what will happen to a tofu wurst on a grill. Maybe we shall know by the coming World Veggie Day, October 1st, 2011.

Winter is icumen in

Winter is icumen in,
Lhude sing Goddamm,
Raineth drop and staineth slop,
And how the wind doth ramm!
Sing: Goddamm.


wrote poet Ezra Pound once in a persiflage of the well-known poem from the middle of the 13th century:

Pound's appreciation is too rough. Also winter has its charms. My friend and English mentor Jim took this exceptional photo on December 1st, 2010.  Fresh snow had just powdered streets, roofs and trees.


Herrnhuth Stars became fashionable in Freiburg last year. I bought one for my balcony and took a photo last year. For those who haven't yet seen one up close here is my photo:


In the meantime last week's snow has completely disappeared. Freiburg is likely to be the only major city in Germany without a white Christmas.


I wish you all a peaceful Christmas and
a healthy New Year!
Eingestellt von Red Baron um 14:13 No comments:

Today the Thema des Tages (The Topic of the Day) in the Badische Zeitung was the commemoration of the 150th anniversary of South Carolina's secession from the Union. When the resulting Civil War between the Yankees and the Rebels ended, bemoaning more than 600.000 dead, many a man in the South rather moaned about the Lost Cause. So far so bad but then the author in his article about the Civil War managed to smuggle in the German Dolchstoßlegende (stab-in-the-back legend) and Not all was bad (in the Third Reich). The author eventually considered the sentiments of those Americans way down South as something in between.

I shake my head! The Dolchstoßlegende born after the lost First World War claimed that it was the home front and in particular socialist Jews who had not supported the German fighting men in those trenches in Flanders. They virtually stabbed them into their backs. It was one of those brainwashing of the people by the right wingers and later by the Nazis. In the Civil War however the conspiracy theory accused the Southern generals as traitors.

Whether in the South it was not all bad before the Confederate States were forced back into the Union I cannot judge but as far as the Nazi regime is concerned all was bad! The Nazis started out with a total domination of the people, changed over to a total war and ended in a total defeat.

Here is a lesson to be learned: Be careful when comparing historical processes and events!
Eingestellt von Red Baron um 14:16 No comments:

Mark or Franc that is no question

My son found the following cartoon in the internet: 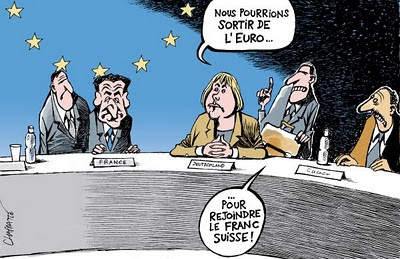 This only reinforces my remark made in the blog below. Don't bail out of the Euro to reintroduce the Deutsche Mark but don't buy Swiss Francs either. Our chancellor has the perspective:  If you can't beat them join them.
Eingestellt von Red Baron um 18:44 No comments:

Ouff, the Franco-German Gipfel (summit) in Freiburg between Nicolas Sarkozy and Angela Merkel is history. Last Friday the town came to a stand still. From 8h30 to 17h30 no streetcars in the city. Bag-pack loving Freiburgers passing through had their Rucksacks checked several times by security forces.

A hundred-strong police unit kept some demonstrators disguised as clowns encircled. As they were polluting the air with some terrible sounds one officer confiscated a small drum but being a perfect German official he handed out a receipt to the drummer.

When a bystander criticized the expense for such summits I answered: One day in Afghanistan costs more than ten Gipfels. Let Angela and Nicolas guided by the Archbishop in person visit the Münster church, let them sign Freiburg's Golden book with our Lord Mayor watching from behind and let them eat a free lunch? specially composed by the one star cook in town; all this doesn't disturb me if it helps French-German friendship. However it annoys me when those two leaders pretend to protect the euro.

Addressing the demand of Luxemburg, Italy, Spain, and Greece for issuing euro bonds Merkel said: We cannot allow to mutualize the (financial) risks and Nicolas paid her lip-service in adding: I don't see in how far Germany would be selfish. Germany is the biggest (financial) contributor in the European Union.

It is true that Greece and Ireland for years lived on credit striving beyond their financial possibilities. They now must pay more for bonds on the international market than Germany to re-finance their debts. But since we have a common currency the old German proverb holds: Mitgefangen, mitgehangen (Captured together, hung together).

In fact, Euro bonds will be only a small remedy curing the imbalance between the rich and the poor European countries. For Germany these bonds present a lesser evil than a Länderfinanzausgleich (a balancing out the budgets between different countries). The latter is practiced in the Federal Republic between various States. From time to time this compensation creates a fury in those Länder that always have to pay to the States that according to the givers don't do their financial homework correctly. I agree such a system in Europe will require a more united community than countries just bound together by a common currency.

In stirring up public opinion in Germany against the issue of euro bonds the opponents deprive the man in the street of higher interest rates for his money. With those he could somewhat compensate inflation. In the meantime people without confidence in neither the euro nor the dollar buy gold, that has become so expensive that some have started to change to and into Swiss francs.
Eingestellt von Red Baron um 17:09 No comments: