No, I am not writing about Günter Grass, Nobel Prize winner in literature and known as a skilled sculptor and fine graphic artist too. 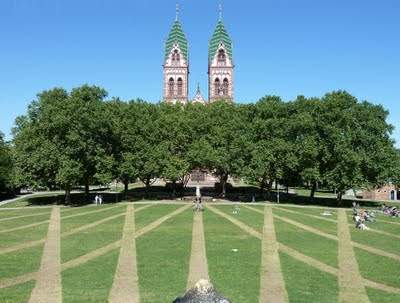 I would like to present a grass work of art made by Ralf Witthaus, an artist from Cologne, on the Stühlinger Church Square in mowing stripes into the lawn. My first reaction was: He cut too deep but his answer was: Nature is taking my work of art back. Art that does exist only for two or three weeks must communicate well. People living around the Stühlinger Church - situated just across the train station and often mistaken by passing travellers as being Freiburg’s Münster Church - look at this piece of art differently in branding a panel: This is no art, this is a noise nuisance! Indeed, Ralf had used a rather noisy lawn mower.
Eingestellt von Red Baron um 16:48 No comments:

Some books you get acquainted with during school days you should absolutely re-read when being old and gray. Into this category, among many others, belong the Bible and Goethe's Faust. Up to now I didn't count Werner Heisenberg's The Part and the Whole (Published in an English translation titled rather commonplace: Physics and Beyond), a book that I read as a young physisist, among those but admittedly I was mistaken. 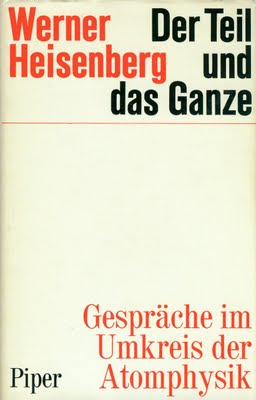 This year my annual bicycle tour will take me to Franconia. Wulf, a former classmate, retired College teacher for German and biology, organizes these yearly trips. He does a marvelous job not only in preparing these tours but while cycling during the day we learn about birds and plants along the way and for the evenings Wulf has prepared a reading choosing always an author and topic with relevance to the region we are cycling.

Apparently there are no famous regional authors connected with Würzburg but Werner Heisenberg, Nobel prize winner in physics, was born in this town in 1901. Since I had contributed to the evening entertainment on past bicycle tours too - although with mixed success - Wulf asked me whether I would be willing to read something written by Heisenberg. To this end I took his autobiography from the shelf and noticed it had been published in 1969 making it more than 40 years that I first read the book.

What is comprehension in physics? Are we satisfied with the understanding of a phenomenon when it is possible to describe it by a mathematical formalism? Although such an understanding will allow us to do calculations and hence make predictions the situation remains quite unsatisfactory. It turns out that terms and definitions of our daily experience will break down when we try to describe phenomena in the atomic world.

One famous example is the physical description of light. Whilst Christiaan Huygens in the 17th Century forwarding the wave theory of light had beaten Isaac Newton's corpuscular theory modern physics eventually englobed both ideas and talks about a particle-wave duality. This is not a fight between scientists but an attempt to explain the physics of light with pictures taken from our everyday experience where we need both complementary descriptions. The problem of comprehension and that our language is incapable of describing the phenomena in atomic physics in an inherently consistent way is one of Heisenberg's leitmotifs. Following my 40 year experience in the subatomic world it is just fascinating to read his book again.
Eingestellt von Red Baron um 15:12 1 comment:

With Osama had bin the German news is again Laden with the nuclear issue. No more energy from fission in the future that is decided but what to do with all that highly radioactive waste already present and still being produced until the last power reactor will have shut down in Germany?

So far our government had put all their money on or better in an abandoned salt mine located in Gorleben in the State of Lower Saxony to serve as the permanent radioactive disposal site. Citing the Anglo-American Wikipedia: The name "Gorleben" has become infamous both nationally and internationally because of plans to build a national deep geological repository for radioactive waste there, along with interim storage units. The waste comes from Germany's nuclear power plants, was reprocessed in France at La Hague, and the unusable remains then sent back to Germany in spent nuclear fuel shipping casks for final storage.
A strong opponent to the Gorleben storage site is Anna Countess of Bernstorff who was honored in Freiburg last week with the Kant-World-Citizen-Prize 2011. She is an admirer of our designated green Governor (Ministerpräsident) for he had agreed to starting a search for a high level radioactive waste disposal site in Baden-Württemberg. Such an action the past Black-Yellow government had always refused arguing that one first has to show that Gorleben is no good. In fact, it had never been good for the Countess as part of the land on top of the Gorleben site belongs to her. No wonder she is strongly opposed to any radioactivity in her - although deep lying - basement. Slightly more objectively than this "not in my basement" attitude Green Peace has declared a risk of water infiltration into the salt mine and lately the news of natural gas diffusing into the cavern has created an "explosive mixture" for any further discussions.

When our designated governor considered the possibility of radioactive storage in Germany's South-West he certainly had the Opalinus clay in mind a geological formation that since years is under investigation in Switzerland in view of a long term safe haven for waste from their power reactors. Mighty layers of this particular clay are found in the North of Switzerland but somewhat delicately extend into Germany. Opalinus clay may in fact be better suited than salt as a geological storage medium since the stuff is waterproof and due to its elasticity will heal any developing geological faults thus keeping the storage cavern tight for generations.

Generally hailed as a courageous step the consent to search for the storage site in our "Ländle" is worth what it is: another brainwashing of the people. The investigation of the Opalinus clay formation will just cost taxpayers' money and - taking the Swiss example - continue for years well beyond the responsibility of any present government. Anyway the answer to all the search and research is already clear from the start: storing radioactivity into Opalinus clay will  bear a residual risk (Restrisiko) just big enough to justify the statement of those living around: Not in my basement.

Let's face it: we simply don't know how to protect future generations against the radiological risk and consequences of all that artificial radioactivity we have produced and are still producing.
Eingestellt von Red Baron um 16:43 No comments: