While EU politicians still behave like a startled pile of chickens following Britain's exit from Europe Red Baron regards the decision of the English and the Welsh as a logical consequence of a frightening global political development.


Many people in developed countries notice that the famous cake is already distributed and that due to the limits of economic growth their part of the cake will not grow in spite of all the promises of the established parties and their leaders. Instead, the gap between the poor and the rich is widening. So it is easy for populist parties and their leaders to accuse the establishment and to promise that they will make the future of all frustrated citizens bright again.

The States have their and we have our problem. We in Europe face dissatisfied people who easily follow right-wing pied pipers accusing the political establishment and Brussels' bureaucrats of all the misery in the land. Let's face it; in spite of all economic (high unemployment rates among the young), refugee, and terrorist problems the European Union is a success story. We had seventy years of peace and economic growth in particular in peripheral regions that the EU financially supports and develops.

The UK always had its problems with Europe. Remember Margaret Thatcher telling her European partners: I want my money back. Now there is more to it when the leader of UKIP (UK Independence Party) Nigel Farage calls the Brexit a victory for decent persons and declares the day after as Britain's Independence Day. This man and his followers surely are dreamers living in the past seeing the UK still ruling an Empire and the waves. Suddenly they stand facing Scottish independence and troubles in Northern Ireland. In splendid isolation will they make remaining England and Wales great again in a globalized world?
Eingestellt von Red Baron um 09:57 No comments:

In 2015 Red Baron wrote about the grocer's apostrophe in English corresponding to an equivalent in German: the Deppenapostroph. At the beginning of this year I introduced you to the Deppenleerzeichen. Now I like to inform you about the Dumme-Jungen-Punkt. I do not know whether such a superfluous full stop has an equivalent in English. In German it was first observed in the 19th century but it presently seems to celebrate its happy comeback (fröhliche Urständ feiern).

The author of a lexikographieblog found an article published in the late 19th century about the bad habit of placing full stops behind single words:

So far so good if it were not for an example seen during my recent trip. In Weimar at the Bauhaus University I took the following photo: 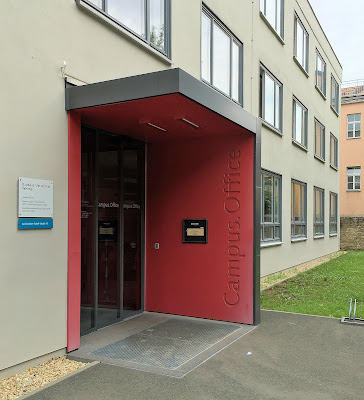 Due to family reasons, Red Baron had to shorten his long-awaited trip to Lutherland, i.e., the region in East Germany where Martin Luther initiated the Reformation and started spreading the new religion 500 years ago. So instead of joining my Group at Karlsruhe at 7 a.m. on June 14, I took the train two days later to meet my fellow travelers at Erfurt.

Going by train in Germany generally is a smooth affair except when you have to change trains. This time, however, my trouble started earlier. When I asked the waiter for my traditional pot of coffee and Butterkuchen, he could only serve me a coffee. As some sort of compensation and new experience: this time, I did not miss my connecting train in Fulda. As it was already late and not having eaten anything worth mentioning during the day, I went directly to the dining car and ordered a schnitzel with salad.

I terminated my dinner with my favorite Butterkuchen and an espresso rather than a pot of coffee.


This will be the first blog in a series describing my visit to Lutherland.

The following morning I met my Group for breakfast. The bus took us to Weimar. In the past, I  blogged about essential aspects of Goethe's town several times, so during the present visit, I was instead looking for new perspectives, although Weimar's reception was something to get used to. 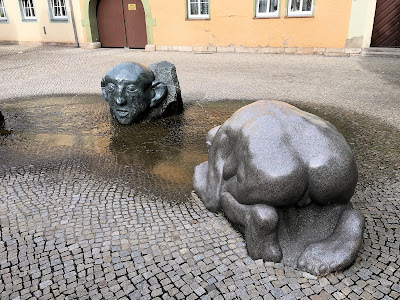 Somewhat perturbed, we passed the Nationaltheater with the famous statue celebrating the curious friendship between Goethe and Schiller. 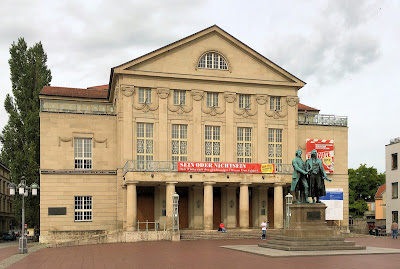 The place became famous after the First World War when a German national assembly met at the theater deliberating and eventually passing the so-called Weimar Constitution.

The next stop on our walking tour was the Bauhaus University, where in the 1920s, among others, Henry van de Velde, Lyonel Feininger, and Walter Gropius had worked and taught.


The park at the river Ilm is always worth a walk.

In 1775 the widowed Duchess of Saxe-Weimar-Eisenach Anna Amalia invited young Goethe (26) to help with the education of her son Carl August (18). When Carl August became Grand Duke in 1815, he made Goethe his chief adviser. Looking at the duke's statue from 1875, you may recognize Goethe's facial profile plus showing the educator's tummy. 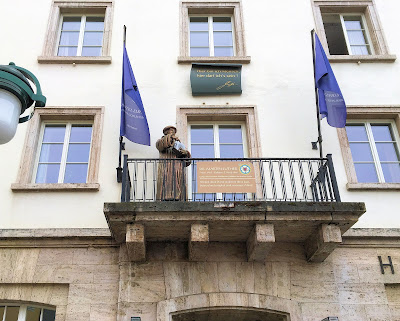 During our extended lunch break, I had the absolute best charcoaled Thüringer Bratwurst in Thuringia at Bianka's. Her secret is: Adding lots of thyme to the stuffing. Later I downed the sausage with a small beer at the Altweimarische Bierstube reading at the entrance the famous citation from Goethe's Faust: Hier bin ich Mensch, hier darf ich's sein! When looking for a translation, Red Baron found the following: 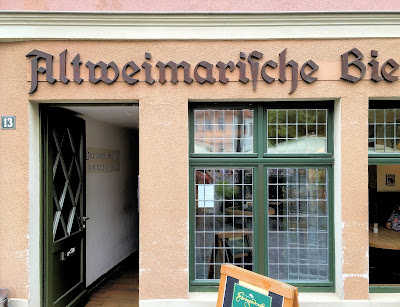 In sipping my beer, I enjoyed the view of the Goethehaus. 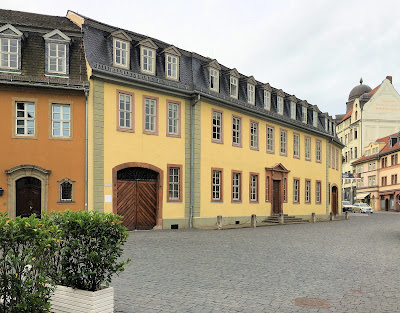 The beginning of the afternoon I spent at the Bauhaus-Museum just opposite of the Nationaltheater. On my way, I passed the Eckermannhaus with Schiller looking out of the window. During Goethe's last years, Johann Peter Eckermann served him as secretary. 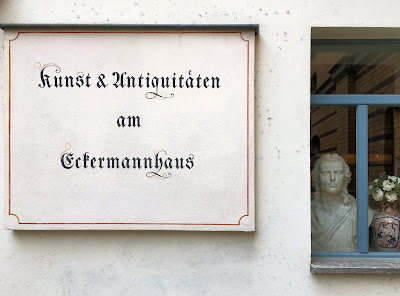 The exhibition at the Bauhaus-Museum shows lots of graphics by Lyonel Feininger. I shall present a typical one in my future blog about Halle. Here are some untypical houses Feininger created while working at the Bauhaus in Weimar. 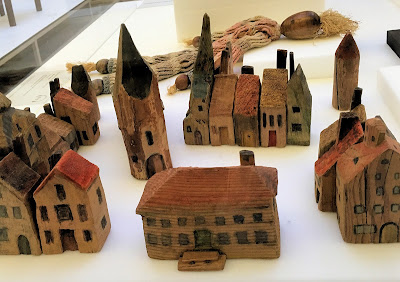 When leaving the Bauhaus-Museum, I noticed a group of students. Most of them I had seen at the exhibition before sitting on the floor and playing with their mobile devices. They continued doing so while standing with their teacher (gray sweater and blue jeans) in front of the building: O tempora, o mores! 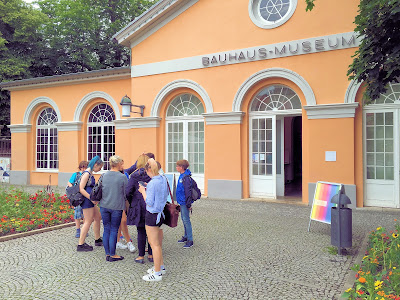 During my last visit to Weimar, the so-called Herder Church was a building site. Now instead of a copy on canvas, the famous allegoric painting describing the new faith was up again in the chancel in time for the 500th anniversary of the Reformation next year. Lucas Cranach, the Elder, started the painting, but it was finished by his son Lucas Cranach the Younger. 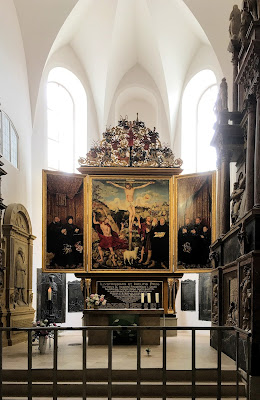 Outside the church, carriage horses keep Weimar tidy but not their tails.

On our way to Leipzig, our Group passed Naumburg in the afternoon, where we spent two hours at the cathedral. To the layperson, the Naumburger Dom is better known for its Stifterfiguren (founder figures, i.e., the sponsors).


The church is dear to all Lutherans, for it was here wherein the presence of Martin Luther and the Elector of Saxony, John Frederick, the first Lutheran bishop Nikolaus von Amsdorf was consecrated in 1542.

In Israel Red Baron learned a Jewish slogan concerning the country's three big cities: Tel Aviv is for work, Haifa is for the fun, and Jerusalem is for religion, Amen.

When an Israeli says Shana Haba B'yerushalayim (next year in Jerusalem) the words are highly symbolic meaning a Jewish Jerusalem with the rebuilt Temple, the Sanhedrin* and a Jewish Monarch.
*The Sanhedrin is the supreme council and tribunal of the Jews headed by a High Priest and having religious, civil, and criminal jurisdiction.

This blog is about Yad Vashem, Israel's memorial for the victims of the Holocaust, but before I give you my impressions here is my memory of my visit to the Western Wall. This name is unknown in German where the retaining wall of the Temple Mount is called Klagemauer (Wailing Wall). Following extensive security checks Orthodox Jews and tourists alike may approach the wall in separate sectors for men and women. 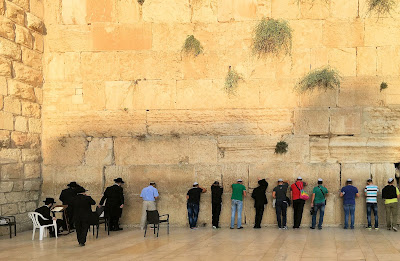 Before I aproached the Western Wall I got hold of a kippa and asked the man at the kiosk offering Jewish prayer books whether he had any prayers in English. He said: Are you Jewish? I snapped back: It is the same God, isn't it? He flinched and started looking for something in English. Eventually he came back with a Guide to a Healthy Planet for all Humanity, an environmental flyer where I found Noah's Seven Laws.

Eventually my fellow travellers saw me davening in front of the Western Wall although I was reading or rather studying the flyer and Noah's laws.

In Yad Vashem the Freiburg group was received in front of the entrance to the Center by the vice director who gave an introduction. 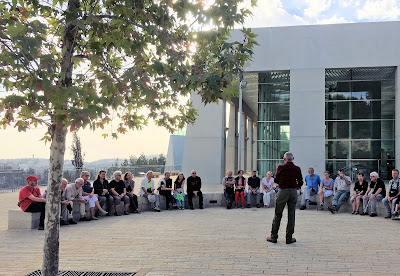 Eventual we entered and walked along the garden of the righteous among the nations on our way to the Holocaust museum.


We also passed the Hall of the Eternal Flame.

Many Jews left Germany and Europe in time but not all of them were welcome.

It was a brain drain for Germany! Most of the intellectuals below left for the States. The few examples do not show all the physicists who helped America to build the atomic bomb.

The harrowing memorial for the murdered children

Shalom. This blog winds up the reporting about my trip to Israel.