Today, as every year, I commemorated Maximilian Dortu at the old Wiehre cemetery where in the early hours of July 31, 1849, he was executed by a Prussian firing squad. This year it was cabaret artist Matthias Deutschmann addressing a rather big crowd in Dortu's honor compared to the usually smaller number of loyal participants.

Born in 1826, Max was the only son of a wealthy Huguenot family in Potsdam. He is not well known in Germany except in his birthplace - where a street upon which his parents' house once stood is named after him - and in Freiburg where he died in 1849. His entry in the English Wikipedia is just a stub.

Young Dortu was one of the martyrs of the German Revolution of 1848/49. Following the Napoleonic wars, at the Congress of Vienna, the German states were restored into barely reformed monarchies. The aim of the revolution that started in Germany in March 1848 was to establish a republic in a unified Germany. Right from the start, the revolutionary forces had to fight both the rulers clinging to their territories and a satisfied bourgeoisie preferring constitutional monarchies to a republic. This double opposition was too much and soon governmental forces crushed the uprisings except in Germany's southwest where people like Dortu hung on. Ultimately a strong Prussian intervention force headed by the "Grape-Shot Prince" (Kartätschenprinz) Wilhelm was needed to defeat the revolutionary movement in Baden.

Dortu coined the nickname Kartätschenprinz for Wilhelm who used this lethal weapon during the March 1848 uprisings against the people of Berlin. This is the same guy who in 1871 became Kaiser Wilhelm upon Germany's unification into the Second Reich.

Being sought for acts of sabotage Dortu fled Prussia and subsequently joined the still active revolutionary movement in Baden in 1849. He even rose to the rank of Major in the revolutionary army at the age of 23. When the Prussian intervention army eventually got hold of him in Freiburg they charged him with high treason and sentenced him to death. In the early hours of July 31, 1849, he died at the Wiehre cemetery in front of a firing squad.

A Quarrel about the German Döner

My earlier blog dealing with the German döner has some follow-up. The other day I read in the Badische Zeitung that it was Nevzar Salim in Reutlingen, Baden-Württemberg, who invented the German type of döner as early as 1969 whereas Kadir Nurman in Berlin up to now considered to be the father was only second in 1971. Now a quarrel is on between two Turks of a type the French have long called une querelle d'Allemand, a German quarrel. Maybe these two Turks are an excellent example of fully assimilated foreigners in Germany who simply cannot help quarreling about a minor thing, as the Germans are known for in France.

Here are the facts: The döner kebap - in Turkey generally served as a delicacy on a plate only about once a week - Kadir handed over to Turkish guest workers in a bun until Germans started to like the food and adopted it. In the meantime, the grilled meat has come to be served in pita bread with salad, onions, and sauce, and Turks working in Berlin have exported this German döner to Turkey with success.

Although Berlin is regarded as the döner capital Nevzat Salim said he was the first to serve döner at a stand in front of Reutlingen’s town-hall in 1969: In the beginning, my father and I had difficulties finding pita bread, so we served the meat (a normal bun being too small) in a double bun. Nevzat continued: I have a role in the long history of the German döner. I don’t want either a title or celebrity but what is right must remain right. Une querelle de Turk ou d'Allemand?
Eingestellt von Red Baron um 18:03 No comments:

In an earlier blog I wrote about a gap site at Freiburg’s Kaisers-Josef-Straße that was unusual: Suddenly  the choir of the St. Martin church became visible when standing on the Münster Square.

In the meantime there is another gap site this time on Salzstraße. It is less spectacular but also reveals a choir. This choir belongs to the church of the former monastery of the Augustiner hermits.

The building activities are part of the reconstruction of Freiburg’s spectacular Augustinermuseum housed in the premises of the abandoned monestary. In a first phase the former nave was transformed into an exhibition hall showing among other artifacts the impressive statues of the prophets that once decorated the outside of the Münster. The original figures were replaced by 4 meter high replica.

The second construction phase comprises the building of a gatehouse fitting into the old style. The new building complex shall house the museum’s collection of engravings.

The third and final phase will concentrate on the renovation of the cloisters.
Eingestellt von Red Baron um 15:55 No comments:

Is there a Hiccup with the Higgs?

Everybody writes about the discovery of the Higgs particle these days such that I decided not to join the crowd. But when yesterday the Badische Zeitung published a surprising cartoon and this morning I read about Stephen Hawking being a bad gambler I changed my mind.

Let us face it, the Higgs boson is Lust und Frust (lust and frustration) for the physics community. On the one hand its experimental evidence confirms the Standard Model filling out the missing link that gives to all other particles their mass. On the other hand physicists are frustrated that the experimental results at the Large Hadron Collider at CERN did so far not give any hint to modern physics like supersymmetry or string theory bound to explain, e.g., dark matter.

Hatzinger’s Cartoon needs some translation. Es wurmt ihn offenbar, dass man wieder ein Teilchen von ihm entdeckt hat: It seems to bug him that they discovered another part of Him. Here Hatzinger makes a subtle allusion to the God particle. Higgs or rather Hicks is the onomatopoetic sound of drunk people in Germany.

Stephen Hawking the twenty century genius likes to bet and to lose. On MSNBC's Cosmic Log you read: About 10 years ago, Gordon Kane, a theoretical physicist at the University of Michigan was discussing some of the issues while he and Hawking were together at a physics conference.

"Stephen interrupted, and said he would like to bet me that there was no Higgs boson," Kane recalled today. It took a while to work out the conditions of the $100 bet, and at one point things looked so dim for the search that Kane sent Hawking a check, according to The Detroit News.

But this week, when researchers at the LHC announced that a subatomic particle matching the Higgs boson's general description had been discovered, it was Hawking's turn to concede the bet. "It seems I have just lost $100," he told the BBC's Pallab Ghosh. The article continues:

For the Higgs boson, Hawking was hoping that there'd be a less orthodox and more elegant mechanism to explain how it is that some particles have mass while others don't. Finding the Standard Model Higgs boson, and nothing else, would be a disappointing outcome — as fellow physicist Stephen Wolfram pointed out in a blog posting today.

"If the decay and other interactions of this particle are as we expect, that will be strong evidence for the so-called Standard Model of particle physics, the theory that explains all our experiments so far," Hawking said. "This is an important result, and should earn Peter Higgs the Nobel Prize. But it is a pity, in a way, because the great advances in physics have come from experiments that gave results we didn't expect."

This was the case when in 1974 two physicists in the States Burton Richter at the Stanford Linear Accelerator Center and Samuel Chao Chung Ting at the Brookhaven National Laboratory simultaneously discovered the J/ψ particle, a quark compound of charm and anti-charm nobody had been waiting for. The discovery was one of these magic moments of glory in physics opening up a whole new physics that eventually ended in today’s Standard Model.

If it turns out that the particle revealed this week is a non-Standard Model Higgs boson, Hawking might still be able to hang onto his $100, and the cosmos will get that much more mysterious. But in any case, Kane is moving on to the next big thing: supersymmetry, the idea that every one of the subatomic particles we've detected to date has a weird twin we haven't yet been able to see. Such a concept could explain the nature of dark matter, which accounts for far more of the universe than the ordinary matter we see around us.

As strange as it sounds, Gordon Kane thinks it's possible to find evidence of supersymmetry — and he's willing to put his money where his mouth is."I'd love to have bets on supersymmetry," he told me, "but no one will take them."
Eingestellt von Red Baron um 11:25 No comments:

In 2010 I reported about a Waldseemüller map that our Chancellor Angela Merkel donated to the Library of Congress. Martin Waldseemüller is the guy who made a map of the world and named the new continent in the west of the old world America. 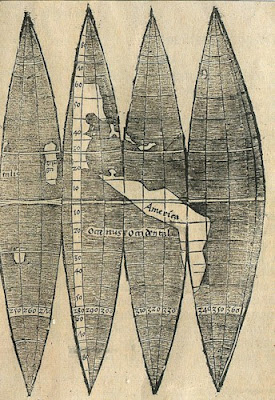 Their discovery presents only the fifth copy known so far of this so-called globe map (Globuskarte) printed around 1510. Its segments, when properly arranged, fold nicely into a globe of 11 cm diameter.

The detail on the left shows a rather rudimentary form of North America whereas the dimensions of South America were a little better known at the time of Waldseemüller. The mass of land in the south served as the place to print the name for the new continent: America.
Eingestellt von Red Baron um 17:18 No comments: