On Monday evening Professor Earl E. Fry of Brigham Young University in Utah spoke about "Trans-Atlantic Drift and Global Shift; Can the United States and Europe compete in a Rapidly Changing World." In the beginning of his talk, Professor Fry appealed to the sympathy of the audience in mentioning his German ancestors who possibly had rather been Swiss. There is a known Frey Chocolate, albeit with an "e", in Switzerland.

Here are some of the slides Professor Fry showed and discussed: 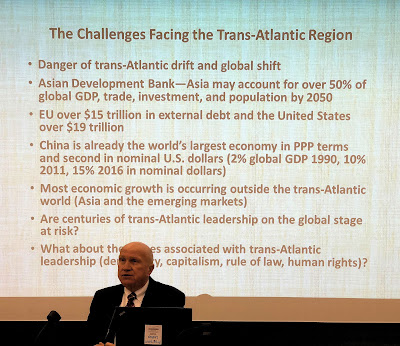 The content of his slide on “The Challenges Facing the Trans-Atlantic Region” confirms the global shift although the high economic growth in Asia and other emerging markets is due to the backlog demand in developing countries. Professor Fry’s worries about the non-proliferation of western values like human rights, democracy, rule of law and capitalism are justified although capitalism may not be the best export article. This is hard to accept for the devoted capitalist Fry. 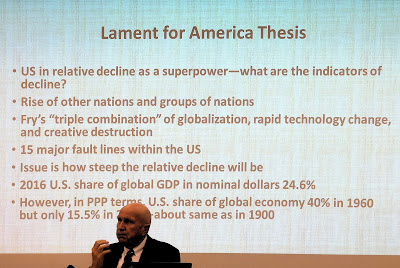 On his slide “Lament for America Thesis,” Professor Fry harped on his triple combination of globalization and rapid technology going in parallel with creative destruction. Indeed globalization has lowered the percentage of the U. S. in terms of Purchasing Power Parity (PPP) on a global scale from 40% in 1967 to only 15,5% in 2015, i.e., to the value of the year 1900.

Creative destruction brings down once thriving crafts and industries replacing them with the outcome of new technologies. Digital photography brought to its knees once mighty “analog” Kodak and coal miners are jobless with cleaner energy sources taking over. It does not help that POTUS in yesterday’s State of the Union message touted, “We have ended the war on American energy, and we have ended the war on beautiful, clean coal.” Yes, I know the slogan “Black is beautiful,” but clean coal is fake coal. 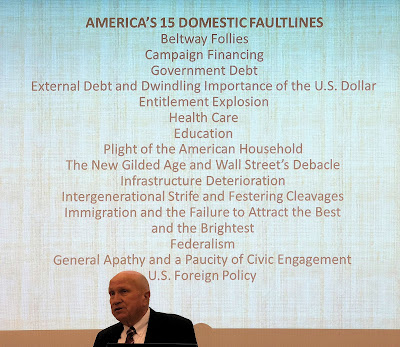 The slide “America’s 15 Domestic Fault Lines” lists problem areas in the States with most of them valid in the European Union (EU) as well. So the explosion of entitlements and benefits is a severe problem in Germany where state and the federal governments kick down the road the financing of acquired pension rights for their civil servants.

That the costs for health care will have only one direction: Going up, Red Baron wrote before. Although I knew that health care in the States is expensive, I did not know that costs are more than twice as high in the US, i.e., 17% versus 8%, than in the EU.

Lacking education, a deteriorating infrastructure, and growing separatism are common problem areas. Whereas in Germany federalism is considered to be an achievement, European countries with rather strong central governments are facing separatist movements, i.e., North and South in Italy, Corsica in France, Catalonia in Spain, and Scotland in the United Kingdom. 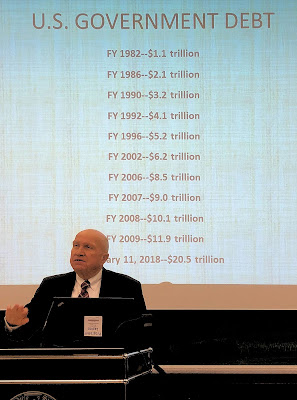 The slide on “U. S. Government Debt” is frightening for me but Professor Fry is optimistic about the US economy going strong. 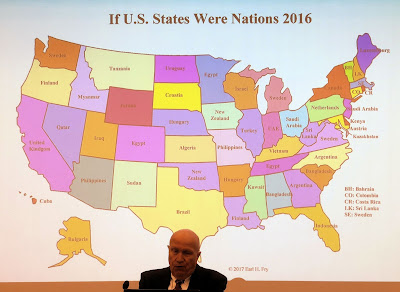 Indeed, on the slide “If U.S States Were Nations 2016” the fact that the State of California alone has the economic strength of the UK is astonishing. 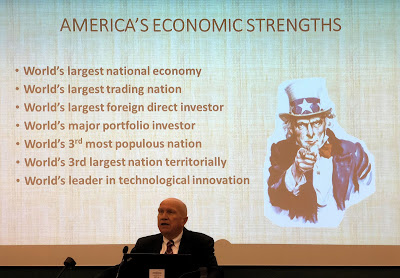 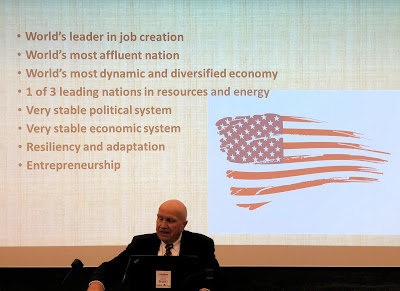 At the end of the talk, I had many questions but held back asking only, “Recently the U.S. has lowered the corporate tax considerably. Consequently, at the recent Economic Forum in Davos, Switzerland, President Trump has invited European firms to invest in America. Where will they find a skilled workforce, when in the States the present unemployment rate is as low as 4%?”

Professor Fry corrected, “It is not only the low corporate tax but also the cheap energy that will attract investors,” and continued, “The problem of the missing workforce can be solved by immigration”. Mhm, I had many more questions but others in the audience wanted to get their queries in too.
Eingestellt von Red Baron um 20:43 No comments:

Last year Red Baron was one of the 1300 lucky citizens invited to Freiburg’s official New Year‘s Reception 2017. This year I went to the reception of my local Lower- and Middle-Wiehre Civic Association.

Following a lengthy speech by the chairman of the Bürgerverein - harping on perennial issues like the traffic situation in our quarter Wiehre, a veritable squaring of the circle - Mayor Dr. Dieter Salomon answered at equal length emphasizing the achievements of his administration in the past years, albeit enhanced by full employment and bubbly tax revenues.

We Freiburgers will elect our mayor on April 22, so the meeting turned out to be a sort of early election rally with all five contenders present. We have a left-wing woman of Die Linke, a right-wing candidate of the AfD, and an independent Green Party male challenging his colleague, incumbent Mayor Dr. Dieter Salomon, who is looking for a third eight-year term as mayor. The Christian Democrats (CDU) did not find a suitable candidate while last week the Social Democrats (SPD) pulled a heretofore unknown young man out of the hat.

This handsome non-party guy called Martin Horn is the only serious contender to Dieter and attracted all the attention. Here are some photos:

When Red Baron learned about Michael Wolff’s book Fire and Fury on January 4, he immediately looked into Amazon and found out that the American edition would not be available in Germany until the 9th. But when I searched in the Apple Store one day later, I was invited to download a copy onto my iPad. The reason for this earlier release was, as you all may know, an impending injunction President Trump’s lawyers were preparing to forbid the publication of the book.

I wanted to read the book not so much for the sometimes juicy details (yes!) but rather to better understand the American political system of checks and balances. On the first pages, I read that like most of us nobody in Trump’s entourage had reckoned with his victory, but I was stunned that he himself was not at all prepared for the presidency for he did not want it himself. The Freiburg-Madison-Gesellschaft will dedicate its February Stammtisch to Fire and Fury with Red Baron reporting.

When last Friday, January 12, halfway through the book, I checked the news I was shocked that reality had surpassed any possible fiction: On Thursday Trump reportedly grew angry during a meeting about protections for immigrants from several countries, and asked: “Why are we having all these people from shithole countries come here?” He then reportedly added, “Why do we need more Haitians?” and suggested the US bring in more people from Norway.

Subsequently, the NYT reported that foreign correspondents had problems translating shithole into their languages. As a child, I remember a shithole being an essential part of the Plumpsklo (pit latrine) at my grandparents’ farm. It was a plank with a hole to sit down on that was in use until the building got a proper toilet connected to the sewer system in the 1950s. By the way, some people now claim that POTUS instead said „shithouse“ which, however, does not change the explanation given in this paragraph. Comedian Stephen Colbert commented subsequently, “He does not belong in the White Hall.”

POTUS's remarks are inhumane and racist (although positive for Norwegians). He is on the same line as leading figures of Germany’s right-wing AfD (Alternative for Germany).

Jens Maier, MP and judge, after having babbled about the creation of mixed race populations, called tennis legend Boris Becker’s son Noah a Halbneger (half-nigger), and AfD deputy chairwoman Beatrix von Storch twittered after the police in Cologne had sent out an appeal for a peaceful New Year’s night in various languages: Was zur Hölle ist in diesem Land los? Wieso twittert eine offizielle Polizeiseite aus NRW auf Arabisch. Meinen Sie, die barbarischen, muslimischen, gruppenvergewaltigenden Männerhorden so zu besänftigen? (What the hell is happening in this country? Why does the police of North Rhine-Westphalia twitter in Arabic? Do they think this will calm down those barbaric, Muslim, and gangbanging hordes of men?) referring to #meToo events in Cologne on New Year’s Eve two years ago.

Apropos people from Norway: 75 years ago the Nazis deported young Johan*, belonging to the blond Germanic race, from Norway to Germany to teach him German Physics. He died last year on July 15, peacefully at the age of 96 in Oslo, a vital man indeed.
*later my boss at CERN until 1980

Elisabeth and I like to eat fish although it is tough to find a good choice in Freiburg. The city is just too far away from Germany’s coasts where it is a tradition to eat seafood often. In the States, I always found a good selection of various fish even in places like Knoxville and in particular lobster in Oak Ridge.


The only chance to eat fresh fish in Freiburg is a German restaurant chain called Nordsee where we quite often eat grilled filet of plaice caught in the Pacific even though it tastes entirely different from plaice found in the North Sea. This is why whenever I am in Hamburg I try to eat Speckscholle, a plaice caught by men on fishing cutters harbored in Finkenwerder, a village on the left bank of the Elbe river. Remember my blog of last January? I nearly missed the boat.

The local Nordsee restaurant tries hard to convince Freiburgers that fish is healthier than their traditional Schäufele (pork shoulder). It issues coupons that will cut your bill in half. Sometimes it is hard to find those coupons and so Red Baron joined their customer club Fish & Friends, to be confused neither with the craft beer Fox & Friends nor with the early morning show on Fox Television. 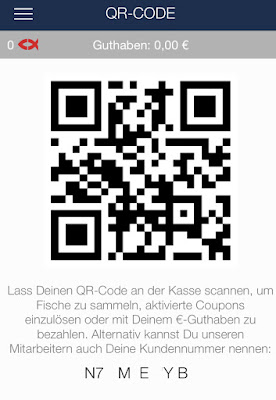 Yesterday I had a strange encounter. With some difficulty, I had created a barcode on my iPhone using the Nordsee app giving me a price reduction on our favorite dish. When I proudly presented the above image to the man behind the checkout counter he panicked, “I don’t need that,” handing me not one but two sheets of coupons thus avoiding the electronic gadget like the plague. He nearly fainted when a young man waiting in line behind me showed him his mobile phone with a barcode too.

So much for digital competence in Germany.
Eingestellt von Red Baron um 22:25 No comments:

I do not mean the German word for pride, I am referring instead to a professor of theology at Freiburg's Alberto-Ludoviciana born in 1808, Alban Stolz, a professing anti-Semite.

He belongs to the Freiburg dozen, i.e., those street names identified by a naming commission as unacceptable according to present moral standards.

An article in yesterday's Badische Zeitung titled "Alban Stolz in the Snow and the Rain" showed an old photo of his bronze head in the snow. These days with temperatures much too warm for the season, his bust is left out in the rain. For how long? The Archbishop's Ordinariate announced already last February that the physical memory of Alban Stolz will be removed.

There are other places in Freiburg's suburbs named after Alban Stolz: a children's daycare center in Zähringen and a Catholic dormitory in Littenweiler. The building was renamed in 2017 and is now dedicated to Saint Alban of Mainz, so residents may continue to call it Alban-Haus.

Stolz was a representative of Catholic anti-Semitism, and as such, he wrote countless articles in his popular calendars, stirring up hate against Jews using animal, plant, and plague metaphors. He was on to Presse- and Schacherjuden (press and bargaining Jews). To these traditional clichés of anti-Judaism, Stolz added the alleged genetic determination of Jewish shortcomings, bringing him close to racist ideas.

In Wikipedia, I read: After the revolutionary turbulence of 1848, he alleged a Jewish-Masonic conspiracy, something of a direct link to the Third Reich where the menace was the Jewish-Bolshevik plot.

A sinister anti-Semitism runs like a red thread through history, from the time of the Romans to the 21st century. In this context, the renaming of a street is nothing other than a symbolic act.
Eingestellt von Red Baron um 16:29 No comments: