The Lay(wo)men Who Govern Us

Contrary to his son Red Baron has little knowledge of financial matters. So I was shocked opening the Badische Zeitung of today reading an article: Finanzkonzept mit Fragezeichen (Financial concept, question marked).

Although in Germany the "permanent" disposal of highly radioactive waste is not yet solved I had so far assumed that its financing was at least assured by the provision of money nuclear power plant operators (PPO) must set aside according to our Atomic Law. These provisions - so far 38 billion euros - however are on shaky grounds. I learned that provisions (Rückstellungen) must not be confused with allocations to reserves (Rücklagen). Provisions are costs the PPOs are placing into their balance sheets. These costs generally are no cash but money on paper and, e.g., may be covered by power plants that still have to earn their money. The biggest PPO, the RWE, alone must provide 10 billion euros for nuclear dismantling and disposal but the stock market value of the company is only slightly higher.

Since there are also hints that the present provisions will not be sufficient to finance the "permanent" disposal of radioactive waste from nuclear power reactors it will again be taxpayer's money to fill the financial gap and future generations to pay for.

Who made that law about the disposal of radioactive waste? Did the PPO's bamboozle the lay(wo)men of our government whose experts apparently did not know the difference between provisions and allocations to reserves? Now our Federal Government hastily tries to iron out the blunder. In the future the PPOs shall pay their radioactive waste money cash into a fund, a solution successfully practiced in Switzerland since the beginning of their nuclear age.
Eingestellt von Red Baron um 14:27 No comments:

Driving north we arrived at Toulouse, capital of the former province Languedoc and nowadays headquarter of Airbus Industries. At an elevation of 130 meters above the Mediterranean sea level the Canal du Midi passes through the city.


Toulouse's Capitol was built in 1750 on the site of previous official buildings that date back to 1160 not regarding earlier Roman constructions.

The building shows the typical pink color of the local terracotta bricks so Toulouse is also called Ville Rose (Pink City). One of the highlights of Toulouse is the Romanesque abbey church of Saint Cernin or in Latin Sanctus Saturninus.


In 250 the pope sent Bishop Saturninus to bring the gospel to Gaul. One day in passing Toulouse's Capitol the Roman authorities ordered him to worship Caesar in sacrificing a bull. When Saturninus refused they attached him to the beast killing him by dragging his body over the steps of the Capitol.


Toulouse's curiosity is the Gothic cathedral Saint Etienne a patchwork construction both from the out- and the inside.


The impressive church building of the former Jacobine Priory houses the relics of the Dominican Thomas Aquinas. As Doctor of the Church Thomas is regarded as the greatest theologian and philosopher of the Catholic Church.


Jacobine's cloister is an oasis of tranquility. 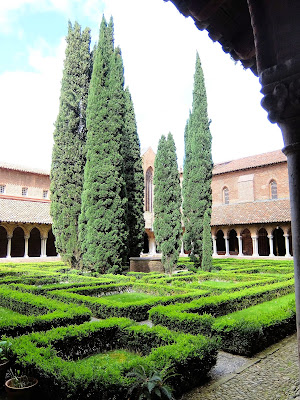 Here repose Toulouse's rich people at the end of the 17th century, the craftsmen:

While Toulouse is called the Ville Rose Albi is known for its red brick buildings as Ville Rouge situated on the river Tarn.

One of the highlights of Albi is its Gothic cathedral Sainte Cecile.

Albi's other highlight is a museum dedicated to the painter Henri de Toulous-Lautrec. 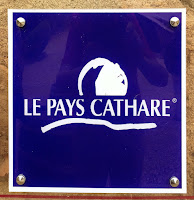 The problem of digital photography is that you take too many shots when traveling. Although I use to clean out as much photos as possible in the evening of an interesting day there remain enough pictures that I take home. Then I sit in front of my computer and spend hours in selecting the best shots and in "photo shopping" them.

What follows is a continuation of the report about my trip to the cathedrals down south in Cathar land visiting Fontfroide Abbey, Narbonne and Carcassonne.

Our group visited this former Cistercian monastery located in a secluded valley 15 kilometers south-west of Narbonne. Together with Pope Innocent III the abbey fought the heretical Cathars who were particularly strong in the region. As many monasteries the Abbey was dissolved in the course of the French Revolution.

The Romans established Narbonne in 118 BC, as Colonia Narbo Martius. It later became the chief city of the Roman province Gallia Narbonensis. Narbonne was located at the important crossroads of the Via Domitia, the first Roman road in Gaul, built at the time of the foundation of the colony, and connecting Italy to Spain and the Via Aquitania connecting the Mediterranean via Toulouse and Bordeaux with the Atlantic.

Later the two "seas" were linked by the Garonne river/canal and the Canal du Midi to which Narbonne is connected by the Canal de la Robine.

We arrived in Narbonne in time for lunch. With a full dinner in the evening Red Baron generally looks for small things to eat. Strolling along the Canal de la Robine I found a place serving Pastis and later had a Sable Occitan.


While eating my cookie I contemplated Narbonne's war memorial for the wars of 1914 - 1918, 1939 -1945, and T.O.E? For me as a physicist the abbreviation means Theory of Everything but a closer look in Wikipedia revealed that it stands for Théâtres d'opérations extérieures, somehow mantling the wars France fought in Algeria, Morocco and Tunisia (1952 - 1962) and in Indochina (1945 - 1952) until the US-Forces took over.

Narbonne's former episcopal palace is now used as city hall. The connected Cathedral Saint-Just-et-Saint-Pasteur, one of the tallest in France, was never finished. The rear of the ambitious building is frozen in time. The continuation of the 41 meter high nave would have required demolishing the city wall dating from the 5th-century. Historians evoke several reasons why the wall was not torn down. The most important causes were the waves of plague between 1348 and 1355 so it was better to retain the city wall.

The Romans strategically fortified Carcassonne around 100 BC and the lower parts of the northern ramparts date from that time. Carcassonne became famous during the crusades against the Albigensians for the city was a stronghold of Occitan Cathars. In August 1209 the crusading army of the Papal Legate, Abbot Arnaud Amalric, forced its citizens to surrender avoiding their holocaust as in the case of Béziers but not their slaughter.

Today with its reconstructed fortifications Carcassonne is a Disney-like tourist attraction.


Walking through Carcassonne over lunchtime the following sign caught my attention: Degustation of cheese and dry sausage. This looked original and was just enough to keep my stomach quiet. I decided to down the offered specialities with a local dry white wine. 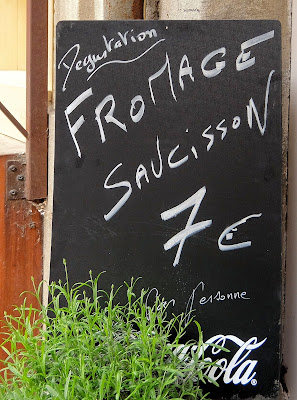 While the patron was preparing the selection of cheese and saucisson a couple from our group passed by and joined me for the treat although ordering red wine.