Much Ado about Drums or German Justice at its Best

Remember my blog about the French-German Gipfel in Freiburg where Nicolas S. and Angela M. were sprayed with water and bystanders with the sound of drums. The police found the noise the left-wing alternative (linksalternativen) Sambastas produced with their drums as too loud to be healthy and confiscated not one as I had wrongly reported but 13 instruments. The official reasons given were that communication between policemen had become impossible and that the sound level had exceeded the 100 decibel limit in Germany's Immission Protection Act. In fact, the highest level the police had recorded was 110 decibels being as loud as a compressed air hammer at one meter distance.

According to the public prosecuter such a noise poses a risk to the health. However, he concluded, the Sambastas hadn't done it on purpose and didn't assent damage to a third person. Anyway, nobody had been hurt and without a tinnitus or a burst tympanum there had been no bodily injury by negligence. And he added: There are realms where noise must be accepted as a socially adequate burden (sozialadäquate Belastung).

Following this statement the Sambastas had high hopes to recuperate their drums without paying the fee of 50 Euros each the city of Freiburg had asked for. The city officials however remain obstinate since the 650 Euros for the 13 drums had been fixed in court and there is no reason to deviate from this decision. Lets face it, the true reason is that Freiburg needs the money, even small sums will help the city's budget.

At present the Sambastas prepare a lawsuit against the city to force them to return the instruments without paying the ransom. The case is now fully in the hands of lawers and they surely will keep it alive. It's promised: I shall keep you abreast of the progress in the drum affair
Eingestellt von Red Baron um 20:47 No comments: 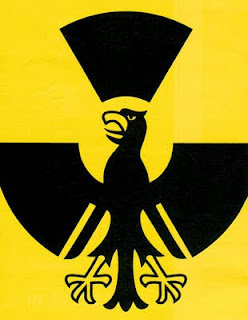 Whenever a Government cannot solve a problem in simply taking a decision they call in the experts. These wise women and men then sit together and eventually come up with one or a bunch of proposals which the government either will choose from or simply ignores. This happened lately when the Merkel administration called in an Ethic Commission to recommend on the abandoning of nuclear energy in Germany. For me this was once more all about stupefying the people (Volksverdummung) as the government had taken the decision to shut down our nuclear power stations before. They just wanted to cover their ... with a recommendation of the Ethic Commission to be used when in later years all our electric lights are low. Strangely enough a shortage in kilowatts may happen not so much in winter but in summer when all the rivers are low on water, the nuclear reactors in France must work on reduced power, and are not willing to export electricity.

What follows are just matters of course and déjà vus: German waste remains in Germany. All technical options for storage should be discussed, i.e. we continue talking in the coming years. Safety of storage has the highest priority. With the possibility of storage in abandoned salt mines greatly compromised the Federal Office recommends a comparative search for other sites: Permanent storage can only be solved with public participation in a way where the outcome is not known in advance (to say it short in German: ist ergebnisoffen).

To make the long story short: with the technical problem not solved and a storage site not found we either turn in circles or we are back to square one each time with more insight but fewer options. I fear that the statement the permanent disposal of radioactive waste must not be left to future generations remains just a statement.
Eingestellt von Red Baron um 14:33 1 comment:

Strolling through the exhibition on Bad Mergentheim's history I suddenly was thunderstruck. Behind an old cupboard only half visible I read the word "Maaß" on a poster and rapidly figured out that it didn't mean a Maß of beer but an information panel introducing metric measures and weights as recommended by the authorities on 29 March 1870 for use in Baden's primary schools. Up to now I always had assumed that the metric system had been introduced in Germany with its unification in 1871. Looking up Wikipedia I read that the 2nd Reich had adopted the metric system indeed on 1 January 1872 but how to explain its earlier introduction in Baden at the eve of the start of the French-Prussian war in 1870? 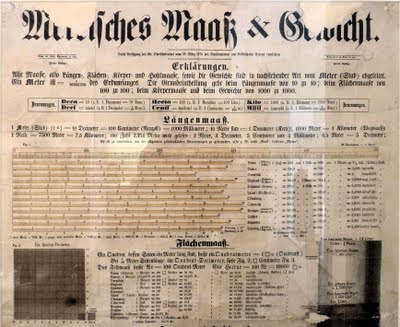 The poster illustrates how up to 1870 technical exchange and trade between German territories were hampered by the use of feet having various lengths. In fact, the foot varied from a meager 0.25 m in the Duchy of Hesse-Darmstadt to an enormous 0.3161 m in the Austrian Empire with the English foot of 0.3048 m in between. The foot in the Great Duchy of Baden measured exactly 0.3 m. Both Hesse's and Baden's feet are a clear deference to Napoleon's Rheinbund making the lengths easily convertible into the meter that France had introduced as early as 1799.

Other European countries have adopted the metric system well before Germany like the Benelux (Belgium, Luxemburg) in 1820, Switzerland 1835, and Italy 1861 following its unification. The UK is still in changeover to the metric system and the US Congress passed a Metric Conversion Act as late as 1975 with apparently no changes so far as the daily life of the US citizen is concerned. The Wikipedia page gives a lot of anecdotal information about the history of the metric system.

The metric system is not without flaws. I do not mean that the statement found on the poster one meter being the 1/40 000 000 part of the earth's circumference was wrong from the start* but that the basic unit of weight is the kilogram i.e. a metric quantity with a prefix. This is due to the fact that the initial French system had retained specific and sometimes traditional names for the new metric quantities. The basic unit for the weight (today it is rather defined as mass) was called the grave and one thousandth of it was the gram. Since grave sounded too aristocratic the name was abandoned in the course of the French Revolution.
*since 1983 one meter is defined as the distance light will travel in vacuum during 1/299 792 458 seconds

A simelar use of traditional names for the new lengths in German is found on the poster. One centimeter is called Neuzoll (new inch), ten meters are a decameter or a Kette (chain) and one kilometer is named Wegstrecke (length of way or path). These names never made it into common use.
Eingestellt von Red Baron um 16:07 No comments:


Strolling through Bad Mergentheim the second stop on this year's bicycle tour I happened to look into the window of an abandoned shop at the Market Place. Some local history nerds had used the "empty" opportunity to place an original drawing of Bad Mergentheim's train station there. The information said that the station was inaugurated in 1870 jointly by the Great Duchy of Baden and the Kingdom of Württemberg: Two identical side buildings were connected by a middle part that used to house a common waiting room. On top of the middle part, there was a tower with two clocks showing the two different times valid in the two states.


I logically assumed that the border between the Baden and Württemberg States before Germany's unification in 1871 had run across the station with Bad Mergentheim a city built on the border. Nope! The following day visiting the exhibition on the city's history I learned that the old border ran slightly out of Mergentheim in the West. The historical map where I followed and marked the relevant borders in red shows to the left the Grand Duchy of Baden with the Württemberg enclave of Deubach in Baden territory. In the upper left, the Kingdom of Bavaria is eating into Württemberg with the latter's micro enclave of Bowiesen situated on the border between Baden and Bavaria. Notice the classical case of a Dreiländereck nearby (a region where borders of three countries meet) in the middle of Old Germany.

With the creation of the federal state Baden-Württemberg in 1951, the border between Baden and Württemberg disappeared although a consensually artificial animosity is cultivated between the Swabians and the Badeners thus keeping alive the former border in their heads.

This year's bicycle tour with some of my former classmates took me to the banks of the Main and Tauber rivers. One of the highlights on our trip was the city of Würzburg particularly known for its Residence Castle (UN heritage) and its two old hospitals Julius- and Bürgerspital where nowadays Fraconian wine is served in special bocksbeutel bottles.

Würzburg is also the city where in 1895 Wilhelm Conrad Röntgen discovered the roentgen rays better known in the US as x-rays. Röntgen modestly used to call them X-Strahlen in German or in the scientific language of the 19th century rayons x. The laboratory room where Röntgen made his discovery can in principle be visited but going there with two friends I found the door locked. Luckily enough an excellent booklet about the history of the new kind of radiation (Über eine neue Art von Strahlen) was on sale at the secretariat of the now material research institute for a ridiculous price of € 2.50.

Here I used the occasion to convince the two ladies present that I should be privileged to show to my two buddies Röntgen's lab since I had written way back in 1960 my diploma thesis about: Applying the contrast transfer function to x-ray picturing. Oh miracle, one of the girls left and came back with the key. The room we visited was filled with Ruhmkorff induction coils and Crookes tubes or Hittorf vacuum glass vessels. The picture below may give you an impression.

Röntgen was lucky that the vacuum he could achieve in his time was rather poor so when he applied high tension between two electrodes melted into a glass vessel the remaining positively charged gas ions hitting the metal cathode generated free electrons. These electrons in turn are accelerated by the high tension towards the anode producing x-ray bremsstrahlung. This term like eigenvalue is one of the few remaining German words or half-words in today's scientific language. 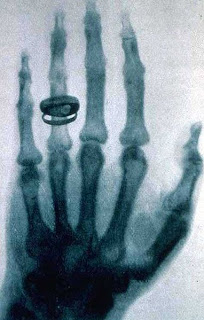 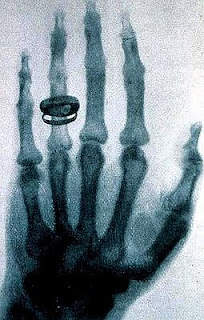