Remember the movie Sleepless in Seattle? This time the story plays in Freiburg but without any romance. Over the years parts of the city have become noisier during night hours with students drinking and partying well beyond midnight. Freiburg's trouble spots are the Bermuda Triangle, a block of buildings near the Martinstor in triangular shape where students get lost in countless pubs, and the Augustinerplatz, a vast sloping square located between Bertoldsbrunnen and Schwabentor where students sit on the cobblestones not just quietly during mild summer nights.

Residents of the neighborhoods do not get much sleep and had approached the City Council already five years ago to look into the matter. Following a lengthy debate in 2008 the City Council decided against a private security service like the one in the university city of Heidelberg where so-called black sheriffs assure law and order during night hours. Instead they spent 18,000 euros erecting an illuminated Säule der Toleranz (Column of Tolerance) showing the time and changing its color to red after 10 p.m., time to leave the square quietly. Needless to say, the City Council "had thrown the money out the window". Although the column had no effect on the noise level it nevertheless became a tourist attraction. A good friend from the States could not believe his eyes when we passed by at 21:09 hours so he chose to take a photo.

This year the noise situation aggravated to the point that a citizen's group formed and became active. In protest they disfigured the fronts of historical buildings with bed sheets showing texts reading Schlaflos in Freiburg (see the title of this blog).

The president of the citizen's group said that it does not help switching between roundtables, technical discussions, and another debate in the City Council actually scheduled for the end of November. He added that the texts on the sheets are harmless compared to what they still have planned as protest. We had to suffer from the loudest, dirtiest, and most difficult summer and we shall not live through another. The City Council strangely has no plan, no ideas, no courage to solve the noise problem.

It may not be strange at all. The inaction of the City Council is probably rooted in the fact that next year there will be municipal elections in Freiburg and no party wants to snub either the local residents or the students. The argument is not far-fetched. Today's Badische Zeitung reported that a disc jockey founded a  citizen's group Pro Nachtleben fighting for the interests of pubs and discos: We would like to preserve Freiburg's subculture.

It's Raining on Washington*

Red Baron likes Leonard Bernstein's West Side Story and likes to be in America, as the lyrics say. When Elisabeth and I arrived in Washington the government was shut down and with it the most important attractions and museums.
*Borrowing and translating the 1975 movie title: Il pleut sur Santiago

On our first day we walked from the hotel near Dupont Circle through a marvelous park to Georgetown. At the waterfront I showed Elisabeth the Kennedy Center and the Watergate complex, memories of times long past. Next we went to the Mall that being a National Park was closed although accessible. It was deserted except for an occasional tourist or jogger while the streets along the Smithsonian Museums being useless were barred.

As a memento the earth quake-shattered and bandaged Washington Monument pointed into gray skies.

The following day we had rain the whole day that occasionally changed from drizzle to downpours. So we spent most of the time on the siteseeing bus driving around the Nation's Capital talking to some lost co-passengers: Brazilians, Russians, and Australians.

With the open upper deck and all the National Monuments closed the Big Bus Tours had on the occasion considerably thinned out their schedule such that we were deprived of circling around the Pentagon with a visit to a shopping center of the same name. So we wound up our tour of the city at the Union Station instead where we boosted our morale with a freshly prepared quiche and a pastrami with onion sandwich.

Back to the hotel I took a photo of the rain-soaked street with all traffic lights on no-go red. 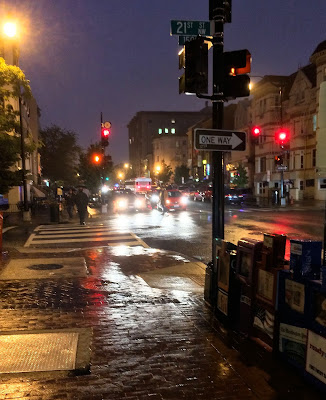 When they eventually turned green people still had little hope hastening by with their umbrellas opened. 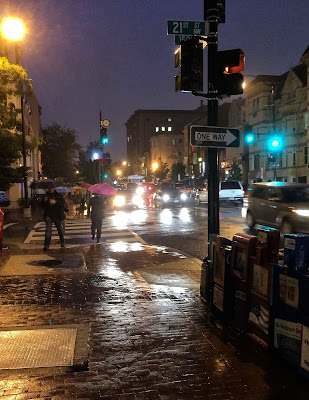 Let me finish this blog with an Ol' Blue Eyes medley: It's very nice to go trav'ling,
However not to London, Paris, and Rome, but
To New York, the city that doesn't sleep, where I never get any sleep either,
To my kind of town, Chicago is,
To Madison where I feel snug among friends,
But it's so much nicer
Yes, it's so much nicer to come home.
Eingestellt von Red Baron um 17:34 1 comment:

In a recent blog I informed you that Brussels had granted a protected geographical name to the Bavarian Brezn (pretzel). Baker Michael Tschirch in Görlitz bakes not pretzels but Schlesischer Streuselkuchen (Silesian crumb cake) and that of an outstanding quality. With six shops in the region and still expanding his business he decided to sell his cake online. He already had labels printed showing his cake within the outlines of former Prussian Silesia and had started advertising when he received a letter from Brussels. The EU bureaucrats informed him that the Original Schlesischer Streuselkuchen is name-protected for the now Polish part of lower Silesia excluding all parts that nowadays belong to Germany and the Czech Republic.

In return the Central Association of German Bakers sent a letter to Brussels questioning their decision since for German bakers the Schlesischer Streuselkuchen is part of the culture of all people with Silesian roots. They now live in Germany all over the place baking the cake according to family tradition. Not its geographical origin but the generic concept of Streuselkuchen is important. In addition the protected Polish word is kołacz slaski which translates into German as Schlesische Kolatsche and not as Schlesischer Streuselkuchen. Citing from COUNCIL REGULATION (EC) No 510/2006 with respect to kołacz slaski: The yeast cake is rectangular in shape. It is produced with a cheese, poppy seed or apple filling or with no filling and is about 3,5 cm (± 0,5 cm) high. The cake measures 40 × 60 cm (± 5 cm) and weighs about 5-6 kg.

In the meantime a law suit was filed in Brussels leading an Austrian judge to get so excited that he wrote in a private blog: Will they argue about the "true" Silesian borders over a Streuselkuchen? He had apparently not forgotten the historical fact that in the 18th century and in three bloody wars Frederick the Great had stolen Silesia from Maria Theresa's Austria.

Baker Tschirch could not care less and is not waiting for the court decision. He now markets his cake under a new and somewhat obscure name: Schlesischer Butterdrückstreusel (Silesian butter-pressed streusel) emphasizing more the crumbs than on the cake.

The analysis of the results of the recent federal election in Germany shows that Chancellor Angela Merkel did everything right. During her campaign she remained vague and promised only little. In addition she had taken the wind out of the red and green sails over the past years. In promoting the phase out of nuclear power she forced the Greens to look for a new profile they eventually found in the social and financial field where they failed. She reduced the Social Democrats being in agreement with her handling of the euro crisis to a sideshow with topics like higher minimum wages and lower rents for housing. In embracing all main streams of German politics Mom Merkel now has the "best image of chancellor" since 1990 but no majority in parliament (Bundestag).

Excluding a Red-Green-Amber coalition with a majority of 5 votes that would shunt Mom there remain four other possibilities of deblocking the situation: coalitions of Black-Red and Black-Green, a minority government, or new federal elections. Fearing Mom's deadly kiss both Greens and Reds hesitate to share the bed with her but hesitating too long may imply new elections. Recent polls show that in such a case Mom's CDU will gain even more votes, the SPD will remain stable, the Greens will lose further but what is more important is that the anti-euro party AfD (Action for Germany) will get more than 5% of the votes and be presented in the Bundestag. Looking at the shift of the voters in the recent election suggests that Die Linke will further suffer in a new election from a drain towards the AfD. However, building stable majorities with five instead of four parties in the German Bundestag will become even more difficult, so all parties presently presented fear new election as the devil fears holy water. In the meantime the round of poker between Black, Red, and Green for forming a coalition government has started and will hopefully enter into horse-trading between two parties about the number of ministers in Mom's government.

Why not try a Merkel minority government? Without a majority in the Bundestag and with the Bundesrat (Germany's Senate) dominated by Red-Green Mom would not even have her budget passed. Sounds familiar?