Last weekend Elisabeth and I visited my son in Zürich. On our way we had a coffee in a rest shop. The guy serving was a Yugoslavian speaking a rudimentary High German with a client trying Swiss German on him. Since no communication was possible the Swiss guy eventually switched to a guttural sounding High German. While meditating over the scene an even better example came to my mind. The other day I overheard two charming ladies living in our housing complex one of English the other of Spanish origin conversing in German, in their lingua franca.

In the Middle Ages educated Christian people communicated in Latin as a common language particularly useful when traveling. This was not Cicero's language as my neighbor a former Latin professor pointed out but Küchenlatein (dog Latin). Latin was not only the language of the Church but also the one to write treaties in. Not only one but two peace treaties ended the Thirty Years' War in 1648. For the Protestants it was the Instrumentum Pacis Caesareo-Suecicum Osnabrugense in Osnabrück and the Catholics were pacified with the Instrumentum Pacis Caesareo-Gallicum Monasteriense in Münster. This practice changed when the Rastatt Peace Treaty in 1714 ending the War of Spanish Succession was written in French. The politically dominant power in Europe France imposed not only the use of their language but greatly influenced manners and culture in the 18th century. Frederic the Great spoke better French than German, although his written texts frequently passed Voltaire's scrutinizing and needed corrections. Until the beginning of the twentieth century French not only was the diplomatic language but the lingua franca of Europe's educated circles. A mixture of Low German and French is the old consul's starting phrase in Thomas Mann's Nobel prize winning novel Die Buddenbrooks playing in the nineteenth century: Je, den Düwel ook, c'est la question, ma très chére demoiselle! Is this a reminiscence of the fact that the Hanseatic city of Lübeck was part of the French Empire from 1811 to 1813?

The dominance of French in Europe changed slowly after the First World War when American English replaced Voltaire's idiom as lingua franca. There was only one field where German was a must in those times: physics. The geniuses of the new physics like Hans Bethe, Max Born, Walther Bothe, Albert Einstein, James Franck, Pascual Jordan, young Werner Heisenberg and even the Dane Niels Bohr lectured in German. So the Americans coming to Göttingen studying quantum mechanics also trudged through Goethe's language.

In these days transatlantic communication took place in the form of letters. A young American scientist had prepared a thick letter but before posting he wanted to find out its weight to know the necessary postage. So he went downtown Göttingen entered a stationary shop, letter in hand and addressed the attractive young lady on the other side of the counter: Fraulein, haben sie eine Wiege, ich möchte etwas wagen (Young lady, do you have a cradle, I would like to dare something). Even when she blushed he did not notice that he had mixed up the vowels: Fräulein, haben sie eine Waage, ich möchte etwas wiegen (Young lady, do you have a pair of scales I want to weigh something). 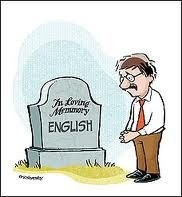 Nowadays English is the lingua franca of the world although Professor Henry Higgins once claimed: In America they haven't used it for years. Luther saw in a language above all a vehicle of communication when he promoted die gemeine deutsche sprache, das mich beide, Ober- und Niderlender, verstehen mögen (the common German language such that those speaking High German and Low German may both understand me). But he also continued: Die sprachen sind die scheyden darynn dis messer des geysts stickt (Languages are like sheaths in which stick the spiritual knives of understanding) and that makes me sometimes feel sorry for the English language used by so many for communication but spoken by so few. This is why I always admire those who master a language perfectly.

At CERN where I worked the two official languages were French and English but we used mostly a mixture Franglais for communication. During meetings I read the lips of those native speakers arguing in their mother tongues paying sometimes more attention to their formulations than to what they actually said. It happened that once I was mistaken about one of my colleagues let us call him Fred whom I admired for his perfect English and for his beautiful handwriting as well. Fred once went to England together with another Englishman Frank and a German to discuss a delicate technical problem with a British firm. In the evening after a few glasses of whiskey the boss of the firm pointed to the German stating: You are German. Then he addressed Frank and declared: You are British. Finally he turned to Fred saying: And you nearly fooled me! This was not gentlemanlike for later I learned that Fred had fled Nazi Germany as a young guy and during his schooling in the UK had made a particular effort to make English his mother tongue.

Another colleague at CERN I admired not only for his perfect French. Albert, a Grande Ecole graduate, was in charge of the authorization process for the LEP storage ring with the French authorities. The main document had been submitted but the French administration asked for some clarification that among others my staff and me provided in the form of Technical Memoranda written in French. One morning my telephone rang: Albert here. Could you see me in my office. We should discuss your recent document. I asked: Is something wrong technically? He retorted: No, it's the French. I replied: But the French  was polished by my French secretary and I have other things to do. He became so angry that I had to give in. So I spend the whole morning going through the text of the TM with Albert. When he retired five years later he threw a party. On that occasion I thanked him: Albert, with you I learned French. He looked at me and sounded disappointed: Is that all what you learned from me?

Coming back to my original topic. Clearly American English is today's lingua franca. In Germany many English technical terms are directly integrated into the German language. But resistance is building up. The Deutsche Bahn was particularly eager to replace German words by what they considered to be English terms. So the changed Fahrkartenschalter to Ticket Counter, Auskunft to Service Point, Kurzzeitparken to Kiss and Ride, Mieträder to Call-a-Bike. Recently Die Bahn started paddling back applying a Teutonic face lifting to their naming practice.
Eingestellt von Red Baron um 15:33 1 comment: 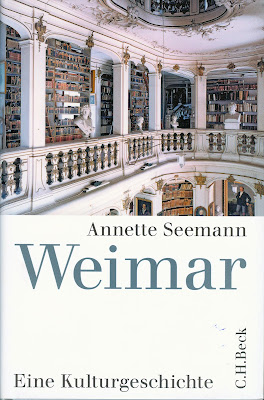 When in May my son was in Frankfort on a business trip and was stranded there for a long and lost weekend he possibly had in mind my blog about Weimar when he spontaneously decided to visit the town. He came back full of fascinating experiences telling us stories and impressed Elisabeth so she wanted to see Weimar too. Three weeks ago we went there for a long weekend staying in (where else?) the Elephant Hotel.

I felt happy showing to my wife the Weimar that I know so well. Before we went it happened that in a small bookshop at Kirchzarten near Freiburg a week earlier Annette Seemann who had published a Weimar travel guide previously gave a presentation of her latest book: Weimar, eine Kulturgeschichte. Her reading was overbooked and I was lucky to find a seat. In a panel discussion the editor for culture of the Badische Zeitung tried to have the author cover the content of the whole book. That was a problem for the amount of information in the already thick book is the result of laborious work presenting many detailed facts but the text occasionally lacks a deeper going analysis. Nevertheless I learned quite a lot, e.g., about the Reformation and that Luther was in Weimar several times. Anette Seemann's tome will complete my collection of books on Weimar that I shall present in a future blog.

Red Baron then a young scientific hopeful in Munich still remembers his first visit to Weimar in 1959. In November 1958 Nikita Khrushchev issued the Berlin ultimatum that caused Hamburg's press baron Axel Springer in January 1959 to start a campaign in the Federal Republic with the slogan Macht das Tor auf (Open the Gate) selling* pins with the Brandenburg Gate. Later in 1987 President Reagan when visiting the Berlin wall and looking at the Gate modulated Springer's slogan imploring the right person: Mr. Gorbachev, open this gate! Mr. Gorbachev, tear down this wall!
* for 20 Pfennig a piece

In fall 1959 a left wing Gesellschaft für fortschrittliche Politik (Society for progressive politics) in Munich had posted an answer to Axel Springer: Wir machen das Tor auf (We open the Gate) offering a bus trip at a moderate price to Gera, a small industrial town in Thuringia, and as a lure a detour to Weimar. Together with a friend and a couple of other students we took this unique opportunity to visit Weimar the working place of Germany's quadruple star Goethe, Herder, Schiller and Wieland but before that our delegation had to suffer agitated political discussions in Gera.

With my friend we fought virtually back to back against devoted followers of the communist regime. In the beginning we felt somewhat lost against their arguments supported by hard facts until we noticed that the achievements forwarded were not as "hard" as it seemed. So I started to invent "supporting numbers" myself and became so successful in defending "western values" that my East German counter part, a trade union official, looking for help frequently asked a journalist of the Neues Deutschland, the official government newspaper: Antworte du dem doch mal (You should rather answer him). 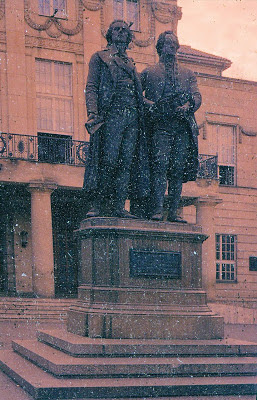 The following day we were shipped to Weimar. It was in November. A pale sun illuminated the square in front of the Goethe-Haus that was closed on a Sunday morning. When we walked to the Goethe-Schiller monument the sun disappeared and the two geniuses of German literature stood gray against the gray front of the Nationaltheater that had been a symbol of hope in 1919 with the adoption of the democratic Constitution of Weimar.

We soon had to leave the magic places to visit Weimar's other heritage the concentration camp Buchenwald. Here during the introduction the East German propaganda machine went into high gear asserting: In West Germany new concentration camps are under construction. Luckily we had some law students in our group mastering their words much better than physicists. They branded the lies and the cheap propaganda resulting in a icy silence. Full of shame our group eventually visited the horror place in silence, unmolested.


My second trip to Weimar took place 30 years later in April 1990 but this is another story as well as Elisabeth's and my most recent trip. Stuff for future blogs.
Eingestellt von Red Baron um 14:24 1 comment: