Many of you know that throughout the year I keep my eyes open looking for some original depictions of the Christmas scene to be used at the end of the year. This season instead of one, I have chosen two, an old and a modern presentation of the birth of Christ.

The first one is a photo I took during my "homage to Kleist trip" at St. Mary in Frankfurt on the river Oder, a church situated near Heinrich's birth place. The church windows were under Russian custody until they returned them in 2008. Three impressive strips of colored glass in Gothic arches show the story of salvation. In the middle window is the story of Christ, on the left hand side run in parallel the usual precursor scenes taken from the Old Testament alluding to the coming Messiah, whilst on the right hand side medieval legends about the Antichrist are woven in a texture of images.

Jesus had announced the Antichrist according to St. Mark 13:
21 And then if anyone says to you, 'Behold, here is the Christ'; or, 'Behold, He is there'; do not believe him;
22 for false Christs and false prophets will arise, and will show signs and wonders, in order to lead astray, if possible, the elect.
23 But take heed; behold, I have told you everything in advance.

In the Middle Ages pious story tellers spread legends about the Antichrist who is generally depicted looking like a teaching Jesus guided by the devil.

Back to Christ's birth scenes. The following picture is an impossible freehand photo I took as close as I could get standing legs wide apart in the transept using the ten power zoom of my Panasonic LUMIX DMC-TZ10. As it should be: new born Jesus is in the center of the picture closely watched by ox and donkey while Maria strangely turns her head away from the scene. Joseph as usual in old illustrations is a somewhat uninvolved bystander. 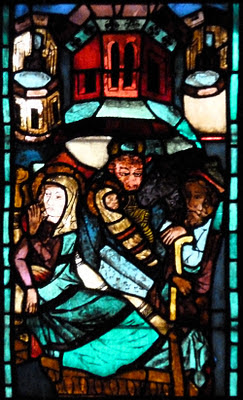 The next picture in the left church window scanned from a poster shows the birth of the Antichrist. 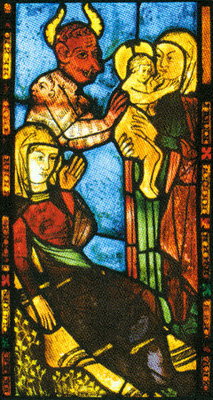 For Luther the Antichrist was personified in the Pope. According to the Apocalypse the Antichrist on the see of St. Peter means that the end of the world is near. In fact, Luther during the last years of his life developed strong eschatology ideas: Mundus ... mox mutandus, Amen (The world will soon vanish, Amen)

Enough of medieval theology. Let us go back to our times.

The second Christmas photo I took in Baden-Baden when, following the Kiefer exhibition, I visited the local Weihnachtsmarkt. It was not just jingle bells and those booths selling Christmas decorations or seasonal food and drinks. Some lanes were lined with paintings by Baden-Baden school classes imagining the Christmas scene. One of those pictures in the form of a Gothic church window is in jolly contrast to what I saw in Frankfurt's St. Mary. While Joseph is sketched in the old tradition as the somewhat absent-minded old man Mary is hugging little Jesus. He likes it and thanks her with his most charming smile. 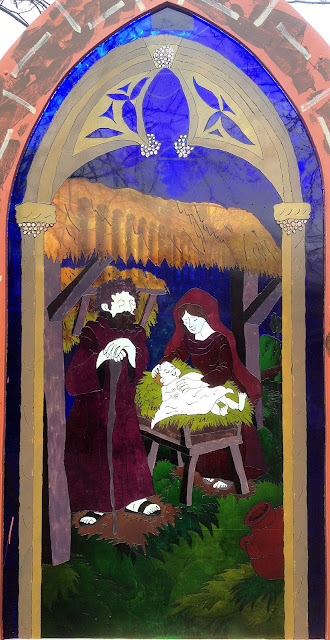 Keeping this comforting and touching scene in my mind, I wish you all a

On December 10, I visited an art exhibition at the Frieder Burda Museum in Baden-Baden devoted to Anselm Kiefer. It so happened that on December 13, the Central Council of Jews in Germany (Zentralrat der Juden in Deutschland) awarded the artist the Leo-Baeck-Medal honoring his efforts in the reconciliation between Jews and Germans. Gay Guido, our foreign minister, handed the medal to Kiefer during a ceremony at the Waldorf Astoria in New York.

The exhibition at Burda's is already impressive because of the sheer size of the paintings. In fact, painting is probably not the right word as the large canvases exhibited are mostly covered with thin lead sheets on which paint is distributed such that one wonders how these monumental collages hold together. 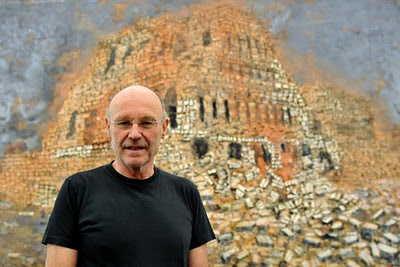 Most impressive from the year 2010 is Kiefer's picture of the Tower of Babel measuring 7.6 x 4.6 m that he had named The Fertile Crescent since his interpretation of the tower in shambles differs from the classical bible story. Looking at Kiefer's picture Pieter Breugel's painting comes right to my mind showing the unfinished tower as a symbol for the hubris of mankind subsequently separated by their different languages. Kiefer however says forget about languages, the base of the tower is still intact such that Occident and Orient meet in fertile Mesopotamia and fructify their cultures mutually. 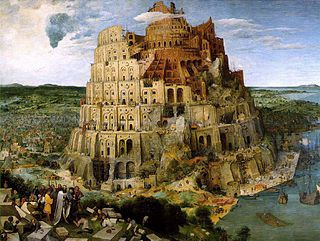 Walking up a staircase I read one of Kiefer's statements on the wall: Ich denke vertikal, und eine der Ebenen ist der Faschismus. Doch ich sehe alle diese Schichten. Ich erzähle in meinen Bildern Geschichten, um zu zeigen, was hinter der Geschichte ist. Ich mache ein Loch und gehe hindurch (I think vertically and one of the layers is fascism, but I see all those layers. I tell stories in my pictures to show what is behind history. I make a hole and walk through).

Although taking photos in the exhibition was not allowed I took a shot of the wording trying hard to digest its meaning on the spot. Advancing further I discovered another monumental collage 7.2 x 4.35 m signed Wege der Weltweisheit, Die Hermannsschlacht a theme perfectly fitting to this year's Kleist anniversary. Suddenly I had my light bulb moment: Kleist is a progenitor of fascism. 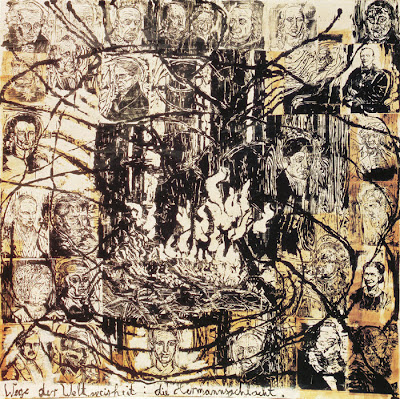 Kleist wrote his drama in five acts in 1808 at a time when Napoleon had occupied all German speaking territories. Die Hermannschlacht (The Battle of the Teutoburg Forest) features battle-winning Arminius. The chief of the Germanic Cherusci tribe fights against the Romans invading Germania. No fantasy is needed to read in those fiery speeches hero Hermann gives the appeal for an uprising against the French occupants. Napoleon had just defeated Prussia. Needless to say the theater piece could not be staged then. During the following restoration the liberal ideas presented in the drama did not fit at all with the period of Biedermeier. Only after the Franco-Prussian war as late as 1875 when the "Hermannsschlacht" against the Erbfeind (hereditary enemy) was won the theater piece saw some performances on German stages.

Kiefer in his collage now tells the story behind the story showing portraits of those Franzosenhasser (French haters) at the time of Napoleon I, their lower layered progenitors, the next layer of hate at the time of Napoleon III, and how this had been transported during the Weimar Republic into the upper Nazi layer: The brown-shirts never forgot the dishonor of the Versailles peace treaty, the French diktat.

Advancing in history I have chosen some key persons from those 36 portraits that I cannot show you in detail because of copyright:

Luise von Mecklenburg-Strelitz (1776-1810), Prussian queen considered by many as the German Jeanne d'Arc because she stood up against Napoleon calling him a monster.

Gebhard Leberecht von Blücher (1742-1819) was somewhat late* at the Battle of Waterloo but is still considered in Germany as the co-winner.
*Wellington ought have moaned: I want night or Blucher! (Ich wollte, es wäre Nacht, oder die Preußen kämen).

Christian Dietrich Grabbe (1801-1836) who not only wrote a drama about Napoleon's last one hundred days but also a remake of the Herrmannsschlacht.

Georg Herwegh (1817-1875) implored the French to stop intervening in German affairs when he conducted his German Legion from Paris into Baden to help Friedrich Hecker in the 1848 uprising.

Hoffmann von Fallersleben (1798-1874) author of the Deutschlandlied with its pan Germanic first stanza.


Alfred von Schlieffen (1833-1913) who developed a military plan for a pre-emptive attack on France.

Walter Flex (1887-1917) a nationalistic poet and soldier during the first World War.

Albert Leo Schlageter (1894-1923) the man from Wiesental near Freiburg sabotaging the French during their occupation of the Ruhr district, being shot for that.

Martin Heidegger (1889-1976) who perceived Schlageter as a martyr of the German cause.

Horst Wessel (1907-1930) the author of the Horst-Wessel-song, shot by the communists, an early martyr for the Nazis.

When the building of the Badische Kommunale Landesbank (Bakola) constructed in 1954 was taken down in 2007 to make room for a modern shopping center scientists started to search for traces of earlier settlements at the place that had always been within the inner city boundaries. Yesterday Dr. Jenisch, the director of the Bakola excavation, guided a group of the Breisgau Geschichtsverein (historical society) through an exhibition of charts documenting the archaeological results and presenting the artifacts he and his team had dug out at the former site of Freiburg's Dominican monastery.

The exhibition called Weihrauch und Pulverdampf (Incense and gun-smoke) is devoted to the former monastery and the times when Freiburg was besieged in the 17th and 18th century by Swedish and French troops. The Dominican monastery within and close to the city walls was located near a vital access gate called Predigertor (preacher's gate). The monastery became famous when from 1236 to 1238, the great Albertus Magnus held the position of Lesemeister (reading master).

Among the most interesting artifacts found at the site of the monastery were hand grenades made from glass. The word grenade comes from pomegranate (Granatapfel) because the original grenades had such a form.

For me, the term hand grenade bears some reminiscence of the 1970ies when at CERN, we were building the Intersecting Storage Rings for protons. To ensure the necessary water pressure in the magnet cooling circuits of the ISR, it became necessary to erect an old-fashioned water tower. Soon my Anglo-American colleagues had nicknamed the building the German hand grenade. For a long time, he stick hand grenade competed with the pineapple design also called Eierhandgranate (egg hand grenade).

The glass hand grenades found in Freiburg are from 1745 and of French origin. During the dismantling of Vauban's fortifications, they were used as explosives but did not detonate as planned.
In battle, a grenadier (sic!), i.e., infantryman throwing a glass hand grenade lived dangerously for the time between ignition and detonation was ill-defined and many a man lost his life before he could fling the grenade at the enemy.

No Ticket for the Pope and finis Kommando Rhino

On page 21 today my favorite newspaper Badische Zeitung published two additional pieces of news about topics I dealt with in earlier blogs. 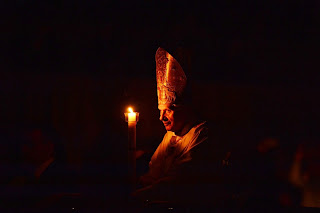 One informed the reader that Pope Benedict will not get a ticket in Freiburg for driving in his papamobile without a seat belt. The charge was dismissed because he had used the papamobile on a street closed for public traffic where the German road traffic act does not hold. Will the man from Dortmund be satisfied with the argument and give up? To be continued.

On the other hand the Wagenburgler story is definitely over. The Kommando Rhino disbanded following internal quarrels about the question of violence against police actions in the past. Some members of the group moved together with other Wagenburglers to the point that the city officials counted more vehicles on the agreed site Eselwinkel than the authorized 45. Since the city has all interest to de-escalate the situation the police so far did not take any action.
Eingestellt von Red Baron um 16:49 1 comment: