The other day I took part in a guided tour of the German military archive in Freiburg organized by my favorite local newspaper for their subscribers. 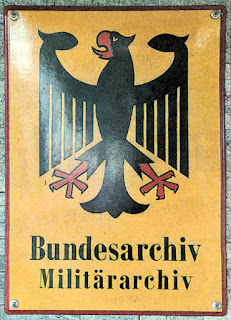 I had planned to write a blog about the visit but had to delay it because of other activities. Today, February 29, I suddenly found my photo in the newspaper. This is the reason together with the rare date that I must publish today. 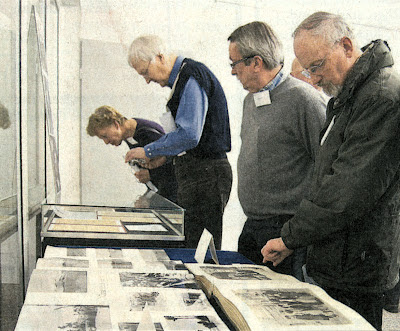 You see me in the back bending forward over one of the showcases taking a picture of a historic document. Those who know me remember that due to age and having talked during my whole life mostly to people shorter than me I keep myself somewhat bent however not as much as on the photo. Is this because I am trying to get the document into frame and focus or is it the content of the document that makes me bow?

The document you find below is the record of unconditional surrender of all German forces signed at Reims, France, on May 7, 1945. While the Germans had hoped for a separate agreement with the Western forces General Eisenhower had insisted on an unconditional surrender but agreed that the document signed at 02.41 hours (a.m.) only became effective on May 8 at 23.01 hours corresponding to May 9, 00.01 hours German daylight saving time. This left about 48 hours for the German ground forces to move to territories occupied by Western forces thus escaping Russian capture and Gulags. You note the champagne city is handwritten Rheims in the document. Were the victors thinking of the Rhine River rather than the booze? 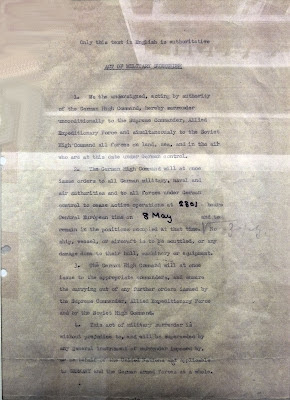 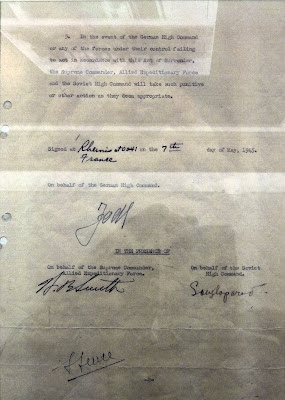 Luckily enough, it was only a coincidence and not a nuclear incident. Yesterday I read in the local newspaper BZ that the Nuclear Regulatory Commission (NRC) has approved the building of two new power reactors in the States whereas a few kilometers from Freiburg just across the Rhine River French and German anti-nuclear activists demanded the shut-down of the French nuclear power station at Fessenheim. Mind you, not all is black and white.

While Germany has decided to phase out nuclear power, the NRC approved the construction of two new light-water high-pressure atomic reactors of the Westinghouse A1000 type at the existing Vogtei site in Georgia.

The last approval of a reactor in the States dates back to 1978 just one year before the nuclear accident occurred at the Three Mile Island site near Harrisburg, Pennsylvania.

According to Westinghouse the A1000 features proven technology, innovative passive safety systems, and economic competitiveness by improved and more efficient operations. Besides, the innovative A1000 offers:

The NRC's vote was a 4 to 1 decision. Its chairman Gregory Jaczko raised considerable safety concerns: I cannot support this approval as if Fukushima did not happen, whereas the Obama administration is looking forward to the creation of 25,000 new jobs and focusses on the usual argument of reducing the US dependence on fossil energy.

In Germany following the melt-downs at the Fukushima reactor plant and defying strong opposition within her own Christian Democratic party, chancellor and physicist Angela Merkel forced the immediate shut down of 8 of Germany's oldest nuclear power stations with the last 9 to be phased out by 2022.

While Merkel and French President Sarkozy (also referred to as Merkozy) are walking and working hand in hand suffocating the Greeks* by trying to keep them in the Eurozone, they have entirely different views on atomic energy.
*forcing the upgrade to central European standards of a traditionally self-contained Greek economy that is living on olives and retsina and has a record 25% of the active population occupied in administration

With the Siberian cold wave currently sweeping over Germany into France, 60 million freezing French suddenly use twice the electrical energy of 80 million Germans. The reason is that many houses in France have electrical heating and rely heavily on our neighbor's 58 power reactors producing nearly 80% of all electrical energy. Due to the massive demand in France, Germany presently is exporting electricity across the Rhine!

This is why Sarkozy, when visiting one of the oldest nuclear sites in France operating at Fessenheim since 1975, stated: The electricity you produce is indispensable for the people.

In the meantime, German anti-atomic protesters tried to join their French colleagues on the other side of the Rhine River, but in vain, the French riot police blocked the bridge with the argument they must protect their president. So the gendarmes and not the president read black on yellow: Merkozy sortons ensemble du nucléaire.

When the French activists were eventually allowed to articulate their arguments against nuclear power, they were told bluntly: There are rigorous safety rules. When these are observed, the power station is safe. Sarkozy stepped up the tone: Anyone who wants to close Fessenheim is committing a political swindle, he said to the applause of Fessensheim's workforce when mentioning the hundreds of jobs depending on their nuclear power station. Sarkozy concluded: France's atomic policy is our force; we are not going to change it.

Referring to the demand of 400 politicians in Alsace who had asked for the immediate shut-down of the Fessenheim reactor complex Freiburg's mayor Dieter Salomon (Green) commented: The President is turning a blind eye on reality and ignoring the worries of the people. He asked Merkel to discuss the issue with Sarkozy in their next tête-à-tête.
Eingestellt von Red Baron um 16:28 No comments: