were the two pillars on which in ancient Greece the education of men* was based.
*My readers know already that women just were the “other” sex in homophilic Greece.

In the series of lectures on “Education Today,” Professor Hans-Joachim Gehrke underlined like Professor Honerkamp earlier the fact that Greek philosophers advanced most in their thinking in regions where they came in contact with foreign cultures. 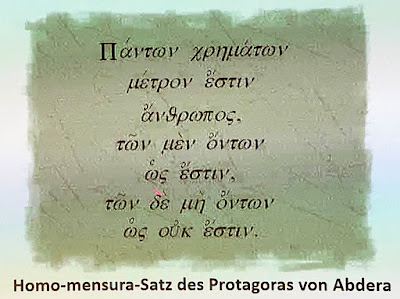 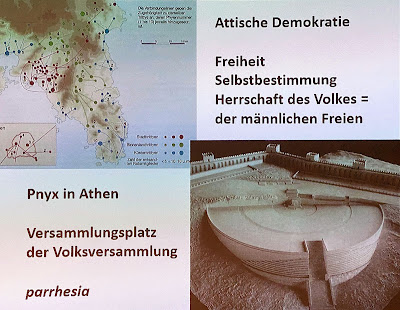 The Pnyx in Athens was the meeting place of the people. The Attic democracy meant freedom and self-determination for the free male.

A new-born child is like a blank slate. Education must teach children how to live in a community in which civility and justice are the basis for cohabitation.

”But who would be a benefactor if not the parents concerning their children? They have created them out of non-existence, and then again, they have given them food and later physical and spiritual education so that they may own not only life but also a good life. Through sport and wrestling lessons, they have helped the body to develop its strengths and good condition, to be agile in posture and movement, while maintaining harmonious balance and civility; but they have fostered the spirit too by teaching reading and writing, arithmetic and geometry, music, and philosophy in its entirety, which elevates the spirit living in a mortal body and leads it up to heaven, showing it the happy, blessed beings, awakening admiration and longing for the unchanging harmonious order which these beings, obedient to their guide and leader, never abandon” (Philo of Alexandria; Φίλων, c. 20 BC – c. 50) 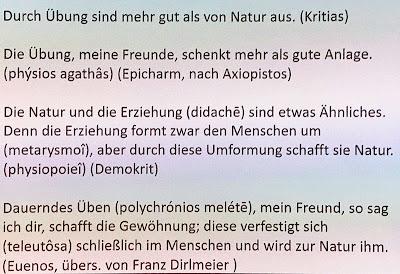 “If one sows genuine education into a young body, it lives and sprouts throughout his life” (Antiphon; Ἀντιφῶν, youngest brother of the philosopher Plato). Education, however, is not sufficient for it requires exercise and practice, for “Exercise, my friends, means more than good talent” (Epicharmus of Kos; Ἐπίχαρμος ὁ Κῷος, c. 550 BC and c. 460 BC) and “By practice more are good than by nature” (Critias; Κριτίας, c. 460 – 403 BC). “Continued exercise, I tell you my friend, results in a habit; this is eventually solidified in man and becomes natural for him” (Euenus of Paros; Εὔηνος ὁ Πάριος, 5th-century BC)

Democritus (Δημόκριτος c. 460 – c. 370 BC) went so far that “Nature and education are similar. Namely, education transforms man, but this transformation creates nature.” 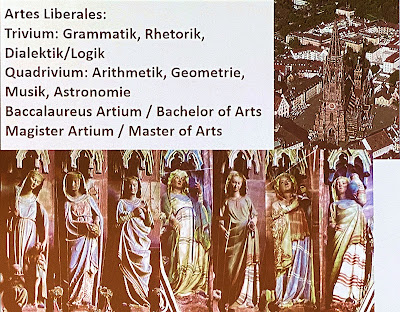 In the Middle Ages and up to today, the Greek canon determines western education. The seven liberal arts described above were taught at the first universities. They are allegorically displayed at the porch of Freiburg’s Munster Church.

Like a good teacher does, Professor Gehrke summarized his lecture on education in ancient Greece at the end:

1. Education is the prerequisite for a free society.

2. Education is aimed at the ability of free citizens to judge.

3. The training of the mind is connected with the practice of the body.

4. The objects of learning are derived from orientation.

5. There are teachers and learners, care and intellectual honesty.
Eingestellt von Red Baron um 21:16 No comments:

In the framework of its studium generale Freiburg University Freiburg offers many lectures to the general public. One prominent series is Saturday University, where the topic of this year’s winter semester is Education Today.

The talks started with a drumbeat by a theoretical physicist on Education in the Age of Science.


Professor Josef Honerkamp's lecture was one of the best I have heard for long. Being a physicist myself, I knew how the thinking of the pre-socratic philosophers still influences modern physics, but in working out the difference between a logical and a dialectic deduction Honerkamp shed new light on the influence of the Greek philosophy on current thinking. 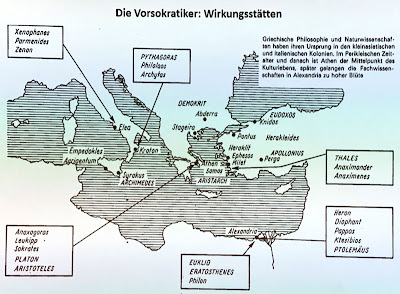 Greek philosophy and science have their origins in the Greek colonies in Asia Minor and Italy. Honerkamp stressed the fact that initially in regions where the Greek philosophers were in contact with alien cultures like Phonicien, Persian, Egyptian, their thinking advanced considerably.

Eventually, Athens became the center of cultural life in the Periclean period, and after that, and later, the specialized sciences flourished in Alexandria. 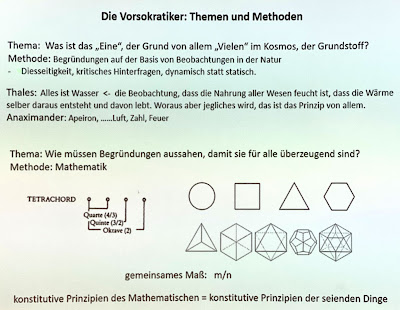 Accordingly, in modern physics, known particles could be arranged in geometrical figures allowing the prediction of missing particles, i.e., particles to be discovered.

Arranging elementary particles in geometrical structures is a favorite pastime of group theory. 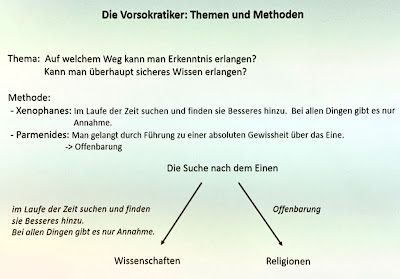 How can a man/woman gain insight? Can one gain sure knowledge at all? There are observations and science, there are revelations and religion. 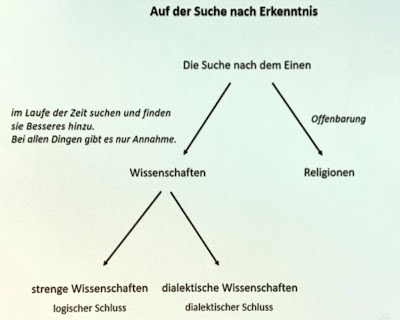 In their quest, men* search for and find better things to add to their understanding with time. Here Professor Honerkamp distinguished between rigorous and dialectic science.
*Let's face it. The world of the ancient Greeks was dominated by males.

Sentences are credible if they are recognized by all, or by most, or by wise men. 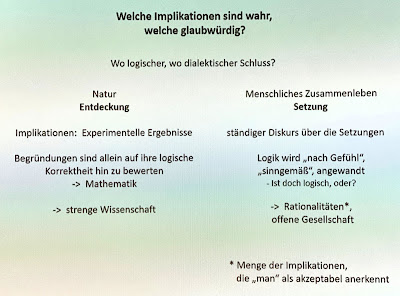 On the one hand, there are nature, discovery, and the implication of experimental results; on the other hand, there are human cohabitation, norms, and continuous discourse about those norms.

In the first case, mathematics assures logical correctness. In the second case, logic is applied instinctively and analogous (That is logical, isn't it?), leading to implications that are regarded as acceptable.

Mathematical logic had a great fascination for the German philosopher Gottfried Wilhelm Leibniz when he wrote," If one could find characters or signs capable of expressing all our thoughts just as purely and strictly as arithmetic expresses numbers or analytical geometry expresses lines, then one could obviously do what one does in arithmetic and geometry with all objects, as far as they are subject to rational thinking."

"And if someone doubted what I put forward, I would say to him, "Let us calculate, monsieur," and taking pen and ink, we would soon be out of embarrassment."

Now the physicist in Professor Honerkamp broke through giving credit to Galileo Galilei for his physics experiments and Isaac Newton for providing the theoretical foundation or mathematics. 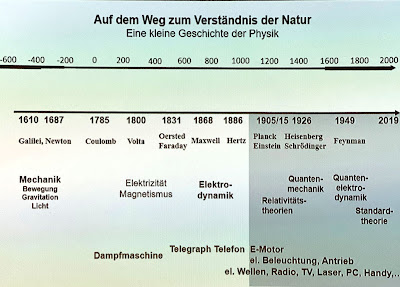 On the way to an understanding of nature. A little history of physics 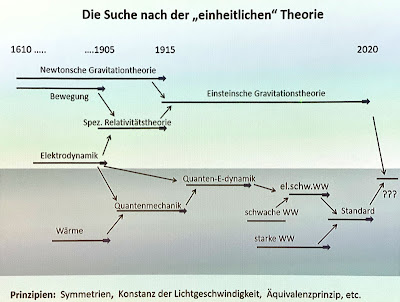 Searching for the "uniform" theory or GUT, the Grand Unification Theory. First-principles are symmetries (the Greek philosophers send their regards), a constant speed of light, and the equivalence principle. 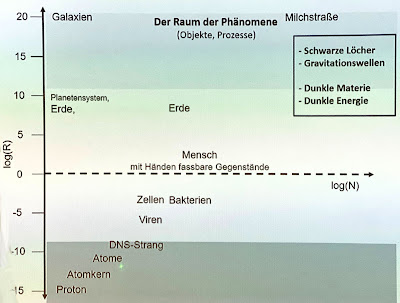 All About Pilsner Beer 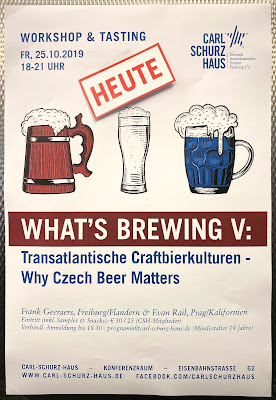 The fifth workshop in the series What's Brewing was devoted to beers of the Pilsner type. 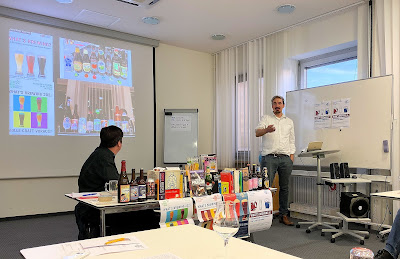 While Frank Greeraers was giving the introduction to the event passing in review the past four workshops (Read here about #one, #three, and #four) an American in Prague and co-host, Evan Rail, was attentively watching and listening, 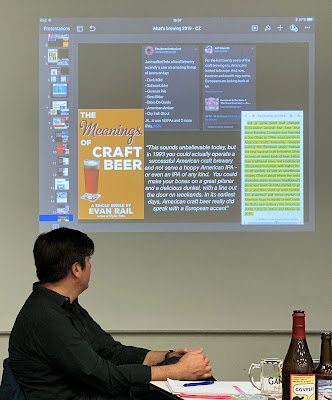 Evan Rail, the author of The Meaning of craft beer, was the star of the evening. Here is the first information we read in his book, "This sounds unbelievable today, but in 1993 you could actually operate a successful American craft brewery and not serve a hoppy American IPA - or even an IPA of any kind. You could make your bones on the great Pilsner and a delicious Dunkel, with a line out the door on weekends. In its earliest days, American craft beer really did speak with a European accent." 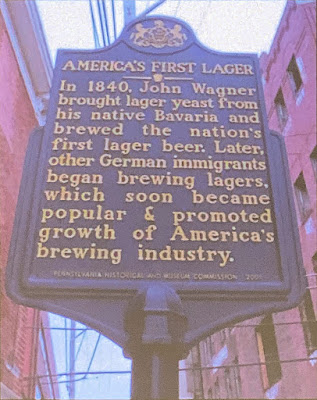 Why shouldn't it? Already in 1840, Bavarian brewers showed to the Americans that a fresh lager tasted different from "warm" English style beers.

Johann Wagner did not call his bottom-fermented beer "Pilsner," as the brewers in Pilsen only learned two years later in 1842 how to make a lager beer. It was again a Bavarian, Josef Groll from Vilshofen, who taught the Pilseners how to brew a cold fermentation beer from a gently kilned and, therefore, very light malt.

Frank called 1840/1842 the years of the Big Bang in beer brewing, Urknall in German, referring to Pilsner Urquell? 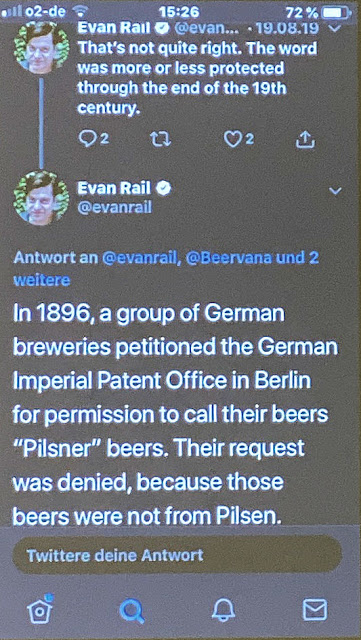 In the beginning, the name was protected when, in 1896, German brewers failed to call their lager beer "Pilsner." 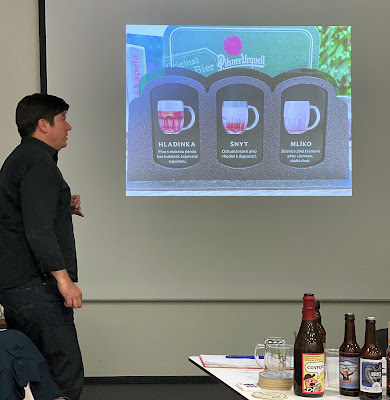 Evan even explained the three ways* of pouring a Pilsner Urquell:
*The explanations I found at http://www.biersekte.de/Aktuell/Neuigkeiten/Pilsner-Urquell-Waldmannskost.htm

Hladinka: the beer is tapped under an approx. 3.5 cm high head. This allows the bitter and delicate aromas and hops notes to be felt more intensely on the palate while drinking, which makes this beer tap a perfect match for meat and fish.

Šnyt: the glass is half-filled* with foam, and then the golden beer is tapped underneath. As the beer is drunk through the head, the malty cereal aromas are particularly intense, while the hop aromas remain in the background.
*In German, we would call the badly poured filling schlecht eingeschenkt.

Mlíko (milk): here, a glass of beer foam is served. The beer is particularly creamy as the froth makes the sweet caramel aromas of the malt more intense when drunk. This tap is a perfect match for desserts.

České Budějovice, in German called Budweis, is a city in Bohemia founded in 1265 by King Ottokar II. Soon after its foundation, the town started to brew Budweiser beer. When in the States in 1876, they named a beer Budweiser a trademark dispute resulted. You may like to read the long story on Wikipedia.

The short story is that in the States, you get US-brewed Budweiser while in Germany, you can buy original Budvar Budweiser, a mass-produced beer made in Budweis.

1. Another Civic Brewhouse was founded in Budweis in 1795 by the German-speaking burghers of the Bohemian city. Nowadays, they brew and bottle a quality lager/pilsner beer in České Budějovice that is marketed as Samson.  It was the first beer we tasted.

2. A Pilsner style Benedict Pale Lager is brewed by Piovar Břevnovsky in Prague. They claim to be the oldest monastery brewery dating from 993!

3. Bernard Dunkel Lager is brewed by the family brewery in Humpolec in the Czech Republic This dark beer has a pleasant taste.

4. Raven Waffle Dance Stroopwafel* Ale from the pivovar Raven in Pilsen. A sweet and full-bodied Stroopwafel Ale brewed in collaboration with the Sisters Brewery, Holland.  Wafel dance is brewed with Dutch Stroopwafels and Czech dedication. This brew was simply too sweet.
*a wafer cookie made from two thin layers of baked dough joined by a caramel filling 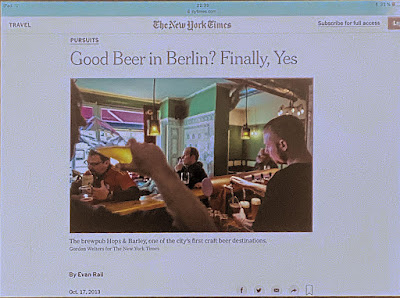 Here is an article by Evan Rail in the NYT. He was affirmative for Berlin beer, but was it because German craft beers now speak with an American accent?

Besides, when everything fails ... 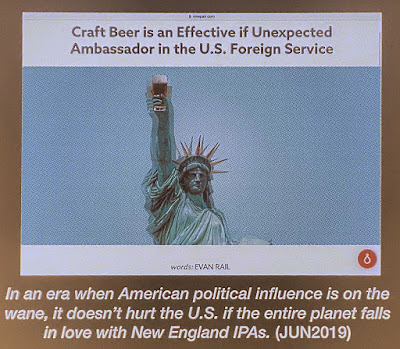 This falling in love resulted in an increased export of craft beer and a beer pairing dinner in Berlin. 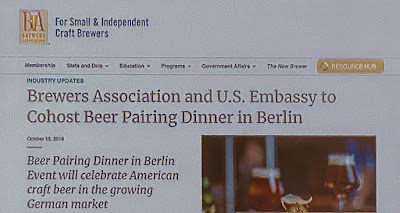 Beer instead of ping-pong diplomacy as, e.g. the ...

5. Bohemian Pilsner brewed by Lemke in Berlin. We brewed it with Bohemian malt and plenty of original wort and then stuffed it with Saazer and East-Kent-Golding hops.

6. Firestone Pivo Pilsner is inspired by the dry-hopped Tipopils from Italy and brewed by the Firestone Brewing Company in California. Pivo exhibits stylistic influences from Germany, Italy, and the Czech Republic with a West Coast dry-hopping twist.

The warnings "Consumption of alcoholic beverages impairs your ability to drive a car or operate machinery and may cause health problems" were apparently not taken seriously by US comedian Conan O'Brian ... 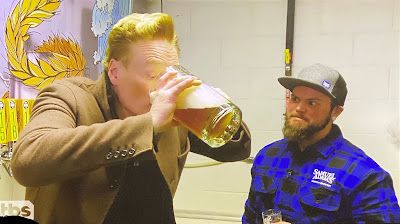 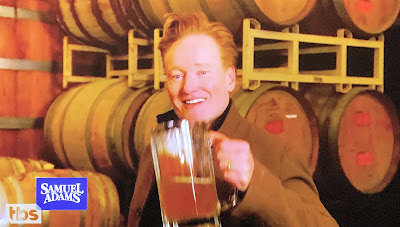 8. Mr. Cinnamon Bun containing cinnamon snail and vanilla extract is mixed by Sudden Death Brewing Company, Timmendorfer Strand, Germany. The motto for the mix, "Hey ladies, what would you like for breakfast tomorrow?"

9. Luckily enough, the last choice was more serious. We tasted the Baltic Porter Woda Portova craft beer brewed by a German-American-Czech group, Yankee & Kraut, and the team from Pivovar Raven. 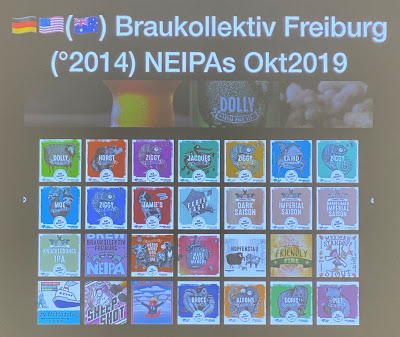 Here we should not forget the craft beer brewed by the Braukollektiv Freiburg, an American-Australian-German Group, having given more than 28 NEIPAs to the beer connoisseurs in the region from 2014 to 2019. 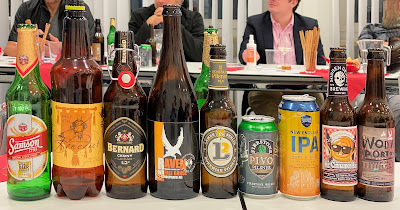 Here is the final group photo of the Jagdstrecke (hunting bag) of the beers tasted at a well-organized and well-remembered workshop.
Eingestellt von Red Baron um 16:11 No comments: