was the title of an article in today's Sunday paper Der Sonntag announcing the beginning of the cabbage harvest in nearby Alsace around Krautergersheim (Nomen est omen). Well, the new coleslaw needs a little fermentation before it will be served in November as la choucroute nouvelle.

Apparently the following comic by the British James Gillray dating from the times of Napoleon convinced the world that the Germans are the Krauts. Although my fellow countrymen/women and me all like sour-krout the heartland of sauerkraut is the Alsace.

The French in Alsace developed a whole culture around their choucroute. They prepare it with Silvaner and Riesling wine, Crémant d'Alsace or even Champagne and serve it with all kinds of meat and fish although la Choucroute aux trois poissons ist gewöhnungsbedürftig (takes getting used to). Red Baron prefers la Choucroute royale served below with gratin instead of boiled potatoes and downed with a local Kronenbourg beer:

But there is more. In a typical choucrouterie Alsatian they serve la Choucroute formidable with ten kinds of meat.

As I said before: It is not yet the season for eating choucroute so presently Red Baron sticks to gebratene Pfifferlinge (chanterelles sautées) here served with Rührei (scrambled eggs) and Bratkartoffeln (chips): 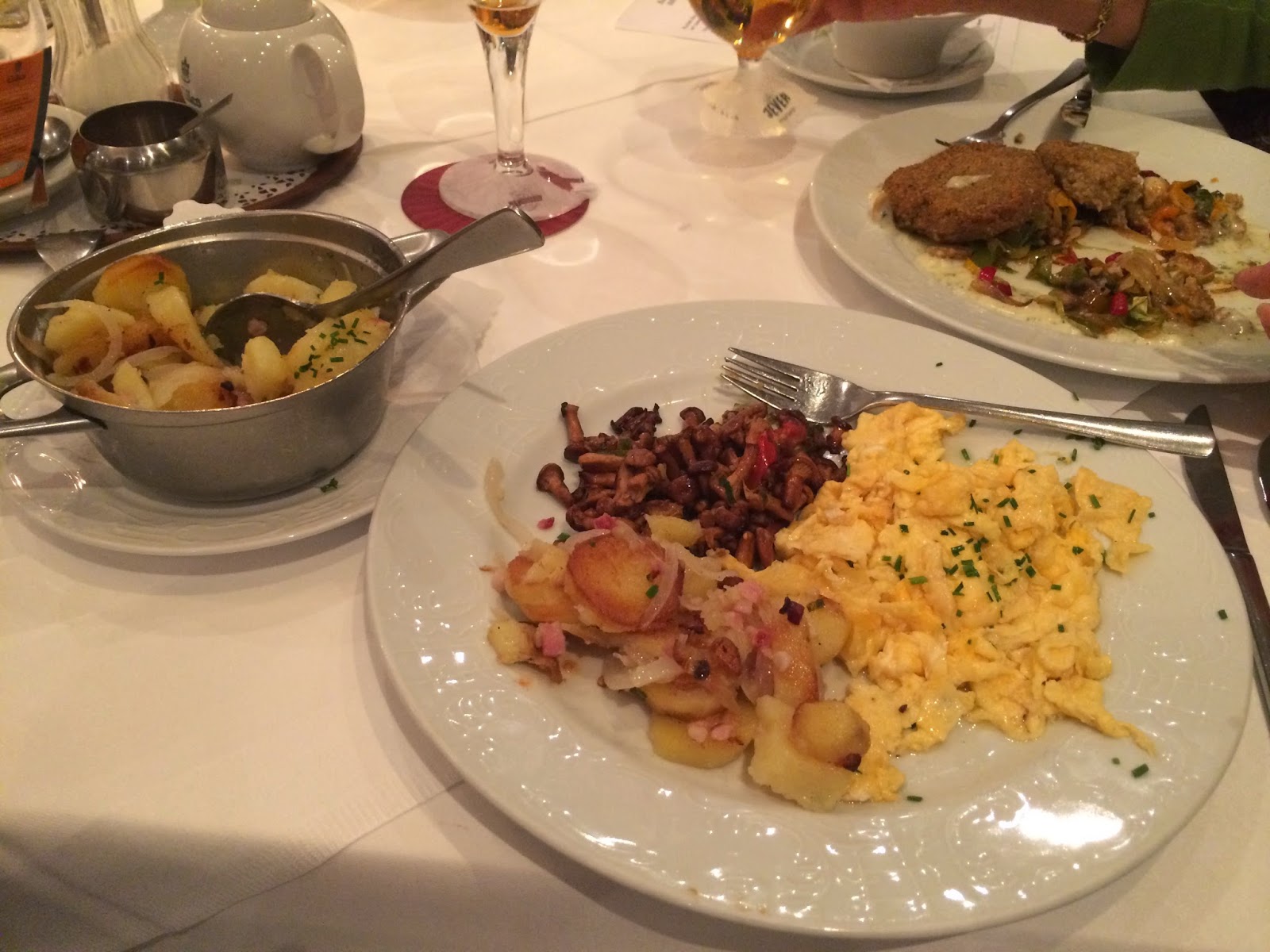 Erhaltungssatzung or how to Outmaneuver Gentrification

Remember my blog about Schrippe und Weckle? The vice-speaker of the German Bundestag (parliament) Wolfgang Thierse had criticised that since in Berlin the newly arriving people from Germany's south-west had ousted the original population around the Käthe-Kollwitz-Platz local bakeries had started to offer exotic schwäbische Weckle instead of the common Berlin Schrippe.

What is called gentrification does not seem to be a problem in the States. Red Baron remembers that New York's Greenwich Village changed into a Schickimicki (trendy) quarter such that its original population moved south of Houston street (to Soho). In the meantime other NY quarters became gentrified like Harlem and nowadays it seems that the Bowery becomes a new trendy quarter. Why should one fight such changes since they are generally linked to an upgrading of the building stock?

Well, Germany is quite different from the States. Here much of the historical building stock was destroyed during the war or it continued to disappear in the rebuilding phase in the 50es and 60es. Nowadays urban building authorities watch lynx-eyed that the remaining historical substance of a city is conserved.

When Red Baron moved to Freiburg forteen years ago he was looking for an apartment big enough to get over the loss of house and garden in Geneva. He finally found a place to live in of sufficient size in a part of town called Unter-Wiehre. The house had been built in 1903 and declared a listed building after the war. A contractor had bought the house, redesigned the inside with apartments equipped to modern standards, and sold them to people wanting to make Freiburg their home. In this case the listed entry meant that the developer had to keep the outside of the building untouched except for new painting but was allowed to fit out the attic that had previously been used as a storage room into an additional apartment thus making more money. Red Baron lived on the second floor, the so called bel etage. From my office I looked through a window where the side wings had romanesque arches into the leaves of trees planted along the street. The two downers of the apartment were a missing elevator and the lack of parking space.

The latter in fact is an important argument with which the planning and building department of a city may intervene in the fight for the Erhalt (conservation) of a living quarter. The necessity of additional parking space for more and bigger cars is just one sign of the replacement of the original population. The potentiality for an upgrading of a quarter will create an appreciation pressure that eventually will lead to the process of displacement of the original population.

Local Erhaltungssatzungen (preservation ordinances) aim to keep the population structure in particular quarters of a town intact but can interact only on the level of urban planning. Hence these ordinances merely present soft means of regulation. They cannot prevent gentrification but will considerably slow down the process in the case of coveted quarters as speakers from Berlin, Hamburg, and Stuttgart at the symposium demonstrated in their talks.

The housing situation in Freiburg is stressed for many people in particular from northern Germany would like to move in. This pushes prices for renting and especially for the ownership of residential apartments. In the final discussion Baubürgermeister Martin Haag said that he did not think that gentrification was a problem for Freiburg yet. He considers the acquisition of residential property a good thing taken the fact that in Germany only 43% of the population live in their own homes compared with rates of 69% for the UK and 65% for the US.
Eingestellt von Red Baron um 16:12 No comments:

Walking through the Gate

Presently it is possible to walk though Freiburg's Martinstor undisturbed; the opening is usually reserved for streetcars. The reason is that since June 10, the center area around the Bertoldsbrunnen is a construction site.

The place where all four streetcar lines had their stops is hermetically sealed off. The streetcars end as a stub lines away from the city center with a bus circle line connecting the end points makeshift. Pedestrians err around high construction site fences and retailers in the area complain about meager sales.

The rails around the Bertoldsbrunnen dating from 1954 were rotten and when breaks of switch blades became more frequent the city and public transport decided in 2013 that a general refurbishment. was necessary. At the same time the sewer system built in 1896 was due for a reconstruction.

Here are some more photos:

About Black and Golden Crosses

Yesterday Red Baron was on his way to a rather academic lecture about: Die karolingische Reform und der Bildtransfer aus der Spätantike in den Norden – bis hin zum Adelhauser Tragaltar (The Carolingian reform and the image transfer from Late Antiquity to the north - up to the portable altar from Adelhausen).

Walking downtown to the Museumsgesellschaft I noticed a protest march turning from a side street into Kaiser-Joseph-Straße. The people carried banners and black crosses with names for those regions on earth presently devastated by war: Afghanistan, Iraq, Israel, Libya, Nigeria, Palestine, Somalia, Sudan, Syria, Ukraine, Yemen. It was a march commemorating the International Day of Peace that in Germany is traditionally held on the first of September, the day when the Third Reich had started the Second World War 75 years ago invading Poland.


In his talk Prof. Warland showed crosses too but there were older and made from gold or gold plated. He explained that Byzantine stylistic elements passing through Italy had been transferred to Aachen, to Charlemagne's court. Somehow one important object from the ninth century, a portable altar, survived in Freiburg. An exhibition: Unterwegs in der Zeit Karls des Großen (On the road during the times of Charlemagne) will open in Freiburg on September 20, and show as highlight the Adelhauser Tragaltar. Portable altars were part of the baggage of high secular and church dignitaries and used as sacred places to celebrate the Eucharist on the road.