Intelligent, ambitious, and attractive Sahra Wagenknecht, whip of Die Linke, Germany’s left-wing party in the Bundestag (federal parliament), founded „#aufstehen“, a collective left movement. The movement shall rise against „social injustice“ in my country. The rassemblement* states that wages and retirement benefits are too low, prices for housing are too high, few people get rich, many more become poor, i.e., the whole spectrum of “socialism”. One year ago in a blog “Socialism for Pedestrians" Red Baron tried to explain that socialism has little in common with communism.
*I like that French word. Whenever something goes wrong in our neighboring country there will be a rassemblement du peuple.

Officially the left movement will be launched on September 4, but thanks to the bid for supporters on their website their number already surpassed the 85.000 mark.

When presenting her movement Sahra said, “Our goal is, of course, other majorities in the Bundestag resulting in a new government with a social agenda.” This sounds like "Bernie Sanders heavy" while already his light version of socialism is indigestible for most Americans. Mind you in nearly all European countries free education and Medicare for all are no longer an issue.

Sahra’s party Die Linke is not amused and sees its own chances dashed. But Sahra declared, “We want something new: not a party, but a movement for all those who want a common fight for our goals. The parties of the left-liberal spectrum, the Social Democrats, the Greens and the Left, have not succeeded in forging a reliable alliance bringing about a change of government in Germany with different political concept.”

Populism left and light? So far only right populism is rising around the world following POTUS the master. His epigones are Orban in Hungary, Zeman in the Czech Republic, Duda in Poland, Erdogan in Turkey, Conte in Italy, and last not least Macron in France.

Already before the official start of Sahra‘s populist rassemblement cabaret artists are mocking. 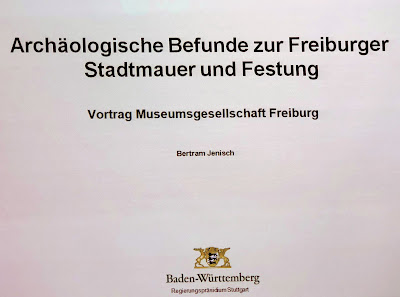 In 2020 Freiburg will celebrate its 900th city anniversary. Duke Konrad of Zähringen awarded the right to hold a market to the small community of craft- and tradesmen that lived at the foot of the Schlossberg (castle hill) in 1120. The rights and duties of the new citizens were written down in a document called Stadtrodel (town document).

It is remarkable that in the same year, the "new citizens" started protecting their community by building an enclosure wall, even leaving space inside the “ring” for future citizens and their trades.

Archaeologist Dr. Betram Jenisch explained that the city wall was 10 to 11 meters high, more than one meter thick, and had an apron. In most places, the moat was 15 meters wide and 5 meters deep. Two breast or abutment walls secured the outside berm of the moat and an inner circular road of 6 meters width and 5 meters height. Archaeological findings proved that to build that mighty construction along the Dreisam River, existing buildings were demolished.

Dr. Jenisch stressed two local peculiarities. While in most cases, city walls are just grounded deeply and built straight up, the Freiburgers used a supporting apron, ensuring that the side pressure from the circular high road was intercepted. Strangely this advantageous Freiburg model was copied nowhere except at Neuenburg on the Rhine, a city founded by the Dukes of Zähringen later in 1175.

The other Freiburg peculiarity is that the building material was unearthed locally, i.e., gravel excavated from the dug-out moat. In separating the gravel into various grain sizes, the builders gained boulders for the wall proper (30%), pebbles* for inner walls (see picture above), and sand (10%) for making mortar. The rest (60%) served as filling material for the circular road. In the course of the work, nearly 200.000 cubic meters of excavated material was moved corresponding to 50.000 truckloads.
*Within the 60% estimated for the rest.

So it is astonishing that the fortification was already finished by 1140, although gates and watchtowers, as seen on the Sickinger Plan of 1589, were still missing. Dendrochronological data reveal that the wooden beams of Freiburg's oldest gate, St. Martin, date back to the year 1202. It took the work of two additional generations to fill the holes in the wall, the entrances to the city, with proper gates.

How was all this financed? Most of the work was done by the citizens themselves, but the Stadtrodel included provisions in case of a succession: one-third of the heritage fell to the city earmarked ad aedificium (for building purposes).

When firearms started to dominate warfare, the old city wall became a joke. Several times during the Thirty Years’ War and in particular during the aggressive French wars in the late 16th and early 18th centuries, artillery easily opened breaches in the fortifications (Bresche schießen).

When the French left Freiburg for good in 1745, they destroyed their fortifications. The city remained much limited in its boundaries until the middle of the 19th century.

Dr. Jenisch’s work is an outstanding example of how modern archaeology will enlarge the knowledge of historians.
Eingestellt von Red Baron um 17:45 No comments:

The “tropical heatwave” is continuing in Freiburg although in this second half of August temperatures rarely pass the 30 ⁰C (86 ⁰F) mark. As is well known, at higher temperatures doctors recommend that elderly people avoid outdoor activities. So over the last two weeks, I sat in front of my desktop computer and looked at my web heritage.

When, following my retirement, I moved from Geneva to Freiburg I started my private internet activity by building my own website.

Soon I became interested in Freiburg’s fascinating history and started this never-ending project of Freiburgs Geschichte in Zitaten (Freiburg’s History in Quotations) (www.freiburgs-history.de)


Reading books and listening to lectures I am continually upgrading the historical content of the site with the number of references surpassing 600 by now.

But there is more. Since 2003 I have documented those nostalgic yearly class reunions:

Furthermore, I published reports about the prestigious bicycle tours with some of my former classmates in the years 2003 to 2011 as organized so professionally by my classmate Wulf:

Here comes the problem. I created the first web pages using Microsoft Frontpage® with its WYSIWYG-editor, so my initial steps in programming in 2002 went fast. I looked around and when I noticed that Freiburg’s Münsterbauverein was lacking a website I assured their presence on the Internet. In the meantime, the MBV paid for more professional help creating a new website.

Although the content of a web page was and still is more important for me than programming I soon learned about Cascading Style Sheets (CSS) and applied the technique as time went by.

As a tool for creating web pages, MS Expression Web® followed Frontpage, and programming of websites became more transparent. Meanwhile, the World Wide Web Consortium (W3C) introduced standards for HTML programming, and it turned out that Frontpage does not support their recent recommendations.

So when I recently looked at my early web pages, I was shocked although I had already removed clumsy programming with the introduction of CSS in the past. The “old code” is flagged quite often warning that although some of the early “formulations” are still accepted they will no longer be supported in the future. As an example: the font attribute is obsolete and should be replaced by “styles”.

So being somehow blocked at home by the heat I started an improvement program replacing all that “antique” programming code by modern “formulations”. Luckily some of the old stuff could be changed by global editing. As a side effect manual changes frequently resulted in a clearer and better page layout.

So I saved my web heritage but will there be people looking at it when I shall have passed away?
Eingestellt von Red Baron um 18:37 No comments:

Strips Are Falling On My Head

There is more to the tropical heat in Freiburg than the drought. Two weeks ago, a small piece of metal fell off the front of Freiburg’s university library (UB). The lamella made from stainless steel measures 4  by 16 centimeters and has sharp edges. In spite of the fact the piece only weighs 20 grams, its impact was enormous.

I was not really surprised for Freiburg's new UB is always good for a surprise. Red Baron reported about the granite surface outside made from Vietnamese basalt stones allegedly mined by children, reflections of the April and the October sun in the glass facade of the library annoying drivers, and a lack of space for the parking of bicycles in front of the building.

Why the metal lamella came down is not clear yet, but experts guess that the adhesive bond with which it was fixed failed because of the heat. Yes, instead of screws and rivets, modern construction relies more and more on gluing techniques.

As a consequence, the area around the building was spaciously cordoned off. Initially access to the UB was only allowed through the bicycle basement, but finally, a protective tunnel to the main entrance was built while experts are still investigating.

I like when raindrops are falling on my head rather than metal lamellae.
Eingestellt von Red Baron um 15:51 No comments:

Marilyn Monroe once made the song about A tropical heat wave popular.  The text has a tailor-made ending, “Gee, her anatomy, Makes the mercury, Jump to ninety-three.” Well, during the recent weeks we encountered higher temperatures than the corresponding 34 ⁰C.

It is not so much the heat that is annoying but what is worrying is the drought. Over the last three weeks, we had no substantial rain in Freiburg and its surroundings. All over Germany farmers are moaning. In particular in northern Germany - generally soaked with rain coming in from the west - more than 50% of the crops are lost.

Here is a local picture of the Stühlinger Kirchplatz. Instead of a green meadow, people are lying on an alliterated Steppe im Stühlinger. In the back is the Church of the Sacred Heart. The formerly green church square served as an art object before.

While within the city boundaries bathers still enjoy what is left of the water ...

... further downstream the remains trickle away in the gravel bed.

Those who suffer most are the fish both from the lack of sufficient fresh supplies and the high temperature of the remaining water.

The photo shows a dying animal but again here a local picture of fish coming to the surface gasping for oxygen is as heartbreaking. This happens at the Waldsee a small lake in a forest nearby. The fire brigade has started to pump out the water splashing it back in the hope that it may absorb some oxygen from the air.

Honor to the German House 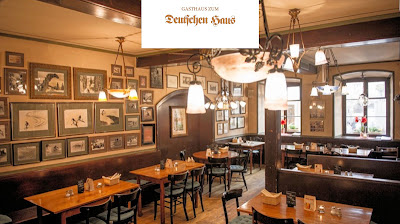 Red Baron blogged about the German House Inn before. 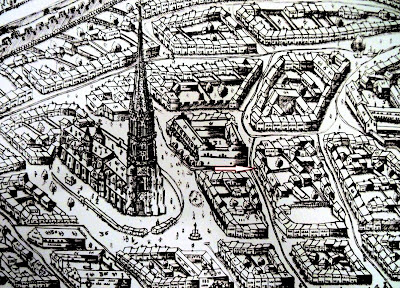 The Gasthof "Zum Deutsches Haus", dates back to the 13th century. On the Sickinger plan, an old city map of Freiburg from 1549, the place is marked by an arrow and is easily located. The present building dates back to 1779. 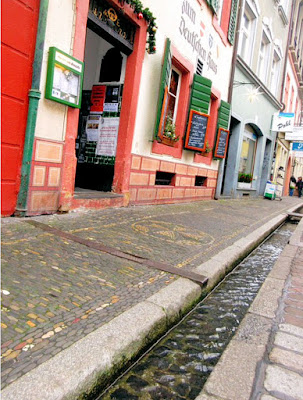 Recently the German House was included in the list of Baden's historical inns. The Bächle (brooklet) marked on the old plan running in front is still there.