Yes, Freiburg‘s new city council elected last Sunday is motley although one color is dominant. Here are the results for those 18 parties with 48 candidates each Red Baron had to choose from and to vote for:

As one would expect, the Greens gained two seats, but that is not all. For reasons unknown to me, Freiburg has the luxury of an Alternative Green party, i.e., GAF somewhat greyish in the diagram. They jumped from one seat to three seats so that the environmentalists now have a total of 16 out of 48 seats in Freiburg's city council.

The eroding of the two Volksparteien CDU and SPD described in the previous blog is also noticed on the municipal level. In Freiburg, the CDU got the beating (minus three seats of nine in the city council) while the SPD lost "only" two of eight.

The Social Democrats also had more votes than the Christian Democrats. This is possibly due to the facts that our young independent Lordmayor Martin Horn was and still is supported by the SPD and that Ulrich von Kirchbach (SPD), mayor for social and cultural affairs, doing an excellent job is rather popular in Freiburg.

Positive was the turnout: 62,8% of the registered voters cast their votes compared to 51,4% in 2014, and there will be 23 female city councilors.

For the first time, the right-wing populist Alternative für Deutschland (AfD) will send two deputies (3.6% of the votes) into the city council although they had hoped for more. It clearly shows that green Freiburg is not a breeding ground for right-wing ideas.
Eingestellt von Red Baron um 17:08 No comments:

Last Sunday the election of the European Parliament had a surprise. The continued Fridays for Future student protests against the inactivity of governments concerning the climate change resulted in massive gains for the European Green parties and for the German Greens, in particular, i.e., they jumped from 10.7% to 20.5% of the votes. A new slogan was born: Sunday for Future.

In Germany the so-called Volksparteien (people’s parties) suffered severe losses, the Christian Democrats (CDU/CSU) were decreasing from 35.3% to 28.9% of the votes, but the Social Democrats (SPD) got a real beating falling from 27.3% to 15.8%. 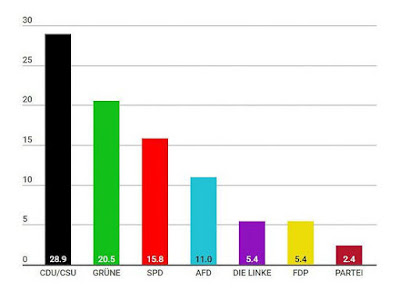 Although the Social Democrats, governing Germany in a Grand Coalition with the Christian Democrats, had pushed through parliament social benefits for the Geringverdiener (low earners) this was not honored by the voters. The major problem of the SPD is that it lacks personalities like Helmut Schmidt, Willy Brandt, or Gerhard Schröder.

Supported by changes in the climate everybody is experiencing by now and with a clear message, the Greens have overtaken the Social Democrats in the popular vote. While the SPD is licking its wounds, a CDU party official said that the Greens had been stoking the fears of the voters. O that German angst!

Is this the end of the classic Volksparteien in Germany? Seen from my perspective: Both CDU and SPD lack a clear profile. Is a Christian attitude sufficient to electrify a pluralistic electorate and make minor improvements in social benefits mobilize a majority of voters? With Merkel retiring the disease of the SPD, i.e., the deficit of strong personalities has infected the CDU as well.

Presently the Greens in Germany do not have a majority, but how will CDU or SPD suffer as the junior partner in a future green-black or green-red coalition government?

Germany’s party landscape is in a state of upheaval.
Eingestellt von Red Baron um 20:44 No comments:

Today I passed by my bakery and noticed a new loaf of bread marked Kartoffel-Spargel Brot.

Adding potatoes to bread is well-known, making it crusty and tasty, although you will look in vain for any potato chips inside. This may be different with asparagus.

Being curious, I rushed home. I cut the loaf and lo and behold pieces of asparagus are baked into the bread. And the bread tastes asparagus! 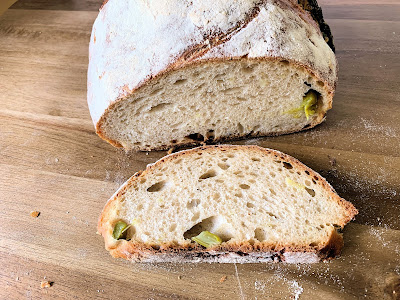 Yes, it is true. Germans are mad about and are running wild for white asparagus in particular. It is the season now, and Red Baron had the treat of those spears already five times this year. Here is a link showing how asparagus is served in Baden. 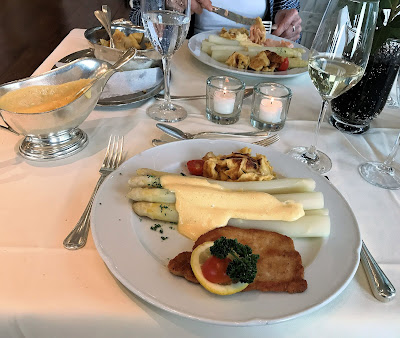 Ritter Sport chocolate is known for its diversity and aficionados of the brand frequently propose new fake varieties showing them on Pinterest.

The asparagus market is tempting and appealing. So this year on April 1, Ritter Sport opened the asparagus season by marketing its Spargel variety guaranteed to contain whole spears.

Don't be fooled. This year too, on April 1, Freiburg's archdiocese finally lifted a secret that it had closely guarded in laying open a Freiburg Bächle that had been running underground straight down the aisle of the Munster church for centuries.

Freiburgers say that if you step in one of those brooklets running through the city and its suburbs you must marry someone from Freiburg. So the Church regards this newly opened Bächle running inside the Munster as an effective method of fighting concubinages.
Eingestellt von Red Baron um 18:18 No comments:

There has been no rain of blogs recently, a drought that I am not going to compensate by heavy rainfall. Private reasons made that I had little time for writing, and the circumstances did not encourage me either. But yes, I am back at last.


Droughts and heavy rainfalls are one consequence of the climatic change we are living through. These two weather phenomena are increasingly observed globally. 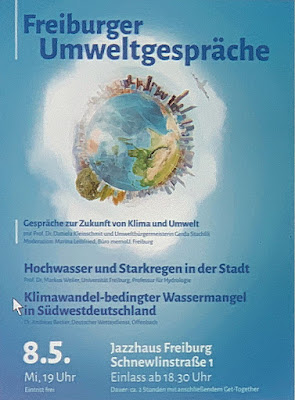 In his presentation about climate change and water shortage in Germany's southwest, Dr. Andreas Becker of the German Meteorological Service presented measured hard data but refused to paint horror scenarios. 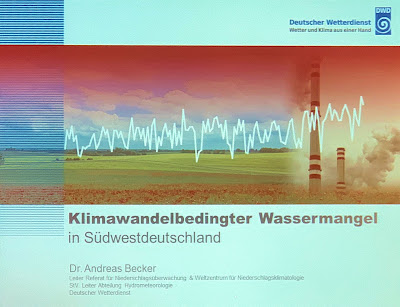 Here is a global map of greenhouse gas emissions showing a pattern one would expect. Not only the consumption-friendly western countries but the populous economies of China and India stick out too. 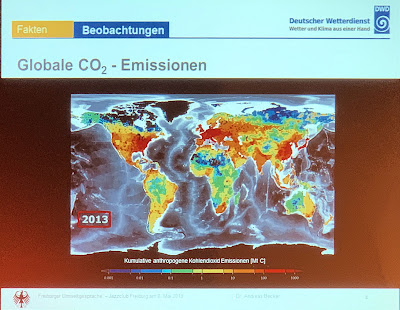 Dr. Becker presented the increase of CO2 concentration in the air from a measuring station at the Mount Loa Observatory on Hawaii serving as the reference point for the world. Recently a record "air mark" of 415 ppm was exceeded.

"As recently as 1910, atmospheric CO2 stood at 300 ppm – higher than it had been for some 800,000 years at least* – but jumped up another 100+ ppm over the next century as pollution levels skyrocketed."
*Measured in drill cores from ice layers

For the future Dr. Becker presented two values to choose from: In the case that the signatories of the Paris climate agreement take active countermeasures against the emission of CO2, a value of 400 ppm could be capped by 2100. Taking no measures will extrapolate the CO2 concentration to 1370 ppm in the same year. 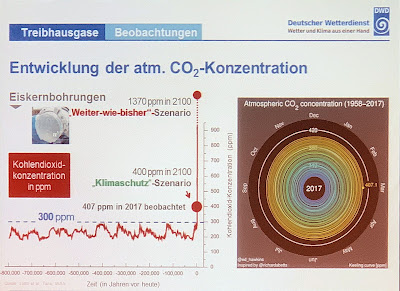 As far as the total amount of rain in Baden-Württemberg is concerned, the region still seems to be well off. 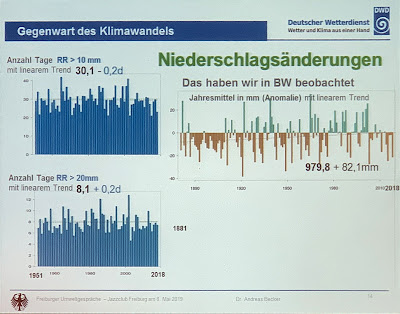 On a global level, however, observed climatic changes are dramatic. The ice around the North Pole is melting rapidly, as shown by the decrease of the surface covered by ice from 1980 to 2018. The albedo of the white snow reflecting the solar radiation becomes lower further heating up the sea, and the cold mass of ice is diminishing. 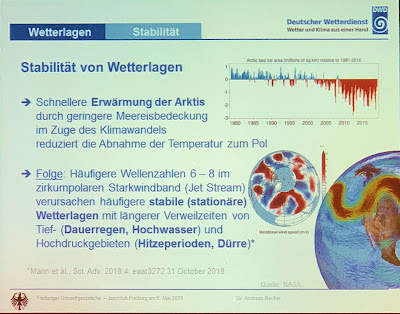 At first look, these effects alone may not seem to be of great concern, but to say it with a quotation from Schiller's drama Wallenstein: The curse of an evil deed is propagating and it will bring forth evil. In fact, climatologists recently observed - with the temperature difference and gradient between the Arctic and the equator region becoming smaller - a weakening of the powerful jetstream. This leads to stable and stationary weather conditions around the globe, causing either persistent rain or long periods of heat and drought, exactly the climate Germany's southwest had lived through last year.

Dr. Becker said that 2018 - shown with a mean temperature of more than 3 degrees too warm and with 40% less precipitation than the mean on the slide - still only was an exceptional year. 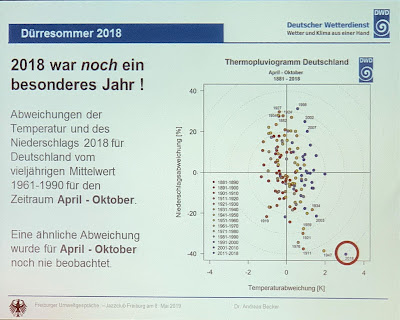 Again, while the total amount of rain for April to Oktober shows no decreasing trend, air temperatures are increasing due to the increasing sunshine duration. 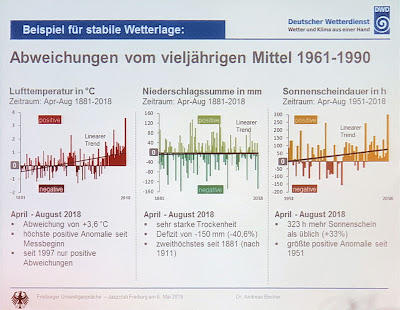 The drought in the region is caused by the increased water evaporation at higher temperatures but is further accentuated by warm and dry southern winds streaming through the Belfort Gap along the Rhine Valley and sweeping the water vapor.

The balance between precipitation and evaporation looks particularly grim for the region around Berlin. 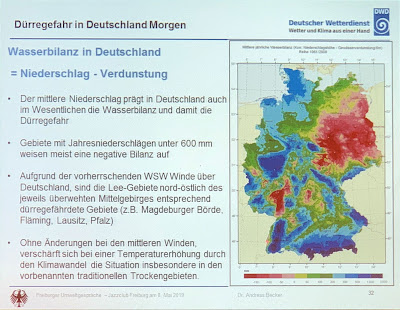 Professor Markus Weiler's talk was centered around heavy rainfall and flooding in towns and somewhat technical. I only retained one of his slides showing a persistent local depression, i.e., a rain cell of only 10 kilometers diameter but stationary for one hour with precipitation of around 50 mm destroying the nearby town of Braunsbach by flooding. 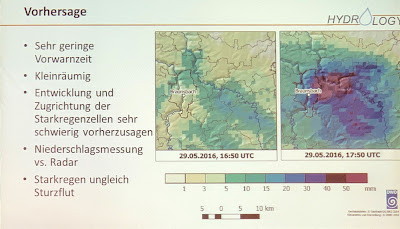 As early as 2008, Red Baron reported about climate change at a Stammtisch of the Freiburg-Madison Gesellschaft. I accentuated the topic further in 2014 and 2015 harping on the Energiewende (energy system transformation).