the award for the most active German-American city partnership in 2019. 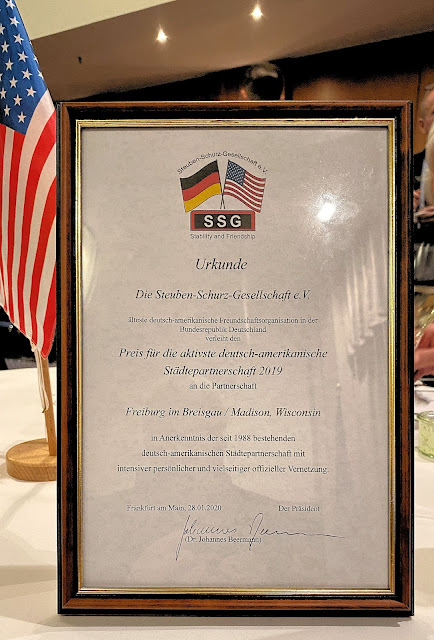 It was the Steuben-Schurz-Society, the oldest German-American friendship organization in Germany, that handed over the certificate in Frankfurt on 28 January 2020, in the framework of its New Year’s reception. 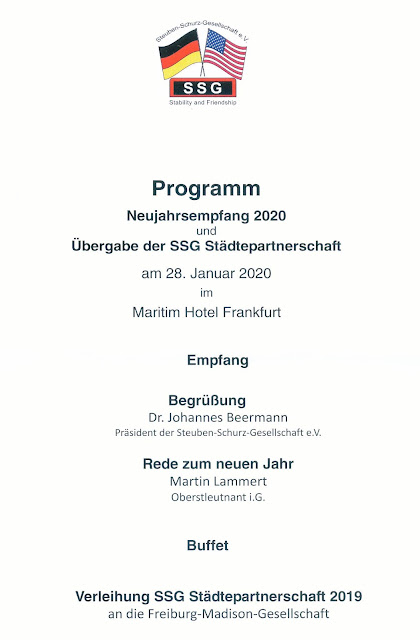 The award was conferred upon the Freiburg-Madison-Gesellschaft in recognition of the German-American city partnership Freiburg im Breisgau/Madison, WI, that has existed since 1988, with intensive personal and diversified official networking.

In his speech, President Toni Schlegel stressed the point that city partnerships brave tensions between governments and are a "lived" international understanding. Freiburg has successful partnerships with Isfahan in Iran, Tel Aviv in Israel, and Madison in the US.

During the biennial partnership market of Freiburg's 12 (!) sister cities in the heart of town, the booths of those special partnerships are placed close to each other, allowing for vivid conversations among the participating visitors. 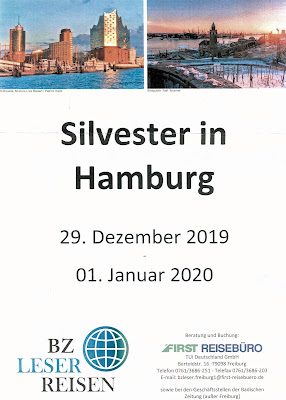 For New Year's Eve, Red Baron had booked a trip to Hamburg (again) this time with the Badische Zeitung, Freiburg's one and only daily newspaper.

But then my relatives did not like that I was planning to stay alone at Christmas. So I took a train north to Bonn on Christmas Eve (December 24), meeting my sister-in-law and my brother for the celebration. 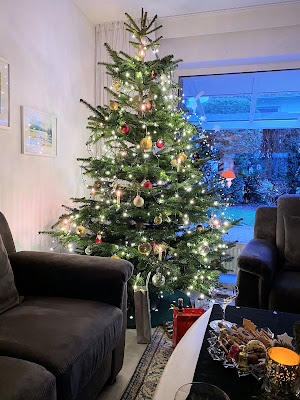 Although the tree was traditional, Christmas Eve was not. I sat with the family of my sister-in-law around a table; we all had meat fondue. The seating arrangement was perfect, so we all found our conversation partner.

On December 27, I continued farther north to Cologne, spending two days with my other sister-in-law and her husband. 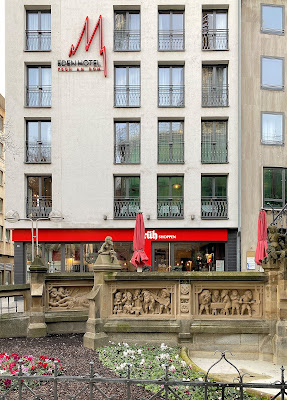 I stayed at the Hotel Früh am Dom (near the cathedral). Früh is known as a traditional beer brewer of Kölsch, the local beer of Cologne. They operate extensive drinking facilities on the ground floor but now run a hotel too. Note the Heinzelmännchenbrunnen (fountain of the brownies or good folks of Cologne) in the foreground. 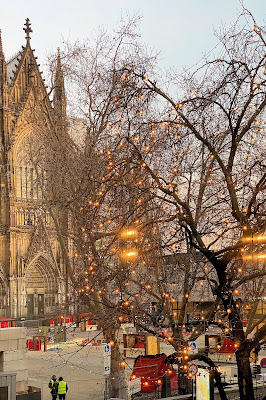 This was the early morning view from the breakfast room. Men are cleaning the square around the cathedral from remains of the Christmas market. 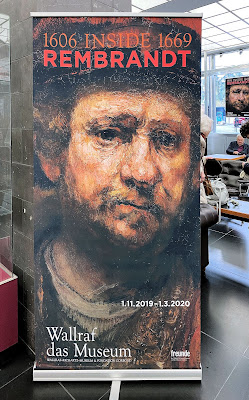 Later during the day, I visited the Rembrandt exhibition at the Wallraf Museum together with my relatives.

On December 29,  I finally took the train to Hamburg to meet my fellow Freiburgers at the hotel. Before New Year’s Eve, we spent some time sightseeing in Hamburg.

During a tour by bus, we passed by the Außenalster, the lake within the city, and admired the panorama of Hamburg's churches.

Our bus moved through the new Hafen City to the entrance of the Elbtunnel on the left bank of the Elbe River. But before we entered the building, we went to the waterfront where we had a fantastic view of the river and the city.

The History of the Advent Wreath

In 1839 the Protestant-Lutheran theologian, educator, and founder of the Protestant Diaconia Johann Hinrich Wichern (1808-1881) introduced the Advent wreath when he was working in a suburb of Hamburg at the Rauhes Haus (Harsh House), an approved school for orphans and street children.

The so-called Wichernkranz was a wagon wheel with initially twenty small red candles and four large white candles. Every evening from the 1st Advent to Christmas Eve, a candle is lit. The big candles are for the Sundays in Advent, the small ones for the workdays. Wichern hung the wreath in the prayer room of the orphanage. It was to show the children the number of days until Christmas while they also learned to count.

Visiting the Kings of St. Pauli

On the second evening in Hamburg, our group went to the theater.

A beer tasting was included in the trip. Hamburg has an old tradition of beer brewing, although the hygienic conditions were not always perfect in the past.


The tasting took place at the Störtebeker, a restaurant on the upper floor of the Elbphilharmonie.

For the tasting, we had the following beers accompanied by appropriate sandwiches. 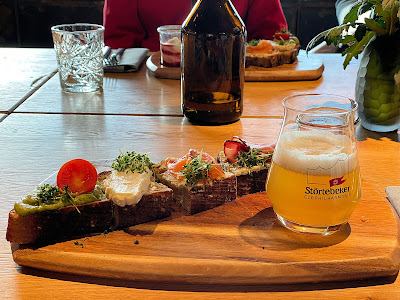 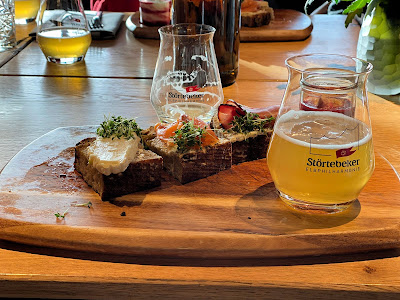 2. Fruity aromatic Wit-Bier (5.1%) with a Brie cheese sandwich. The Störtebeker Witbier brewed with coriander and orange peel does not fulfill the German Reinheitsgebot. You must ask for an authorization for naming the drink a beer. Such approval is easier to get in Northern Germany than in Bavaria.

3. Stormy fresh bitterly Atlantik Pale Ale (5.1%) and a smoked salmon sandwich not in a photo. 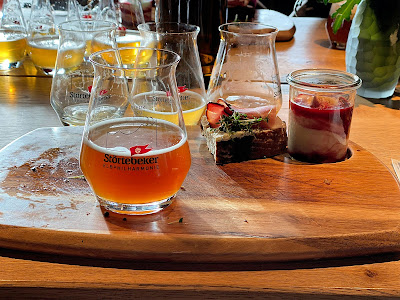 4. Substantial fruity Roggen Weizen (5.4%) and a smoked ham sandwich. The rye “wheat” beer is brewed with aromatic hops in addition to the classical bitter hops. 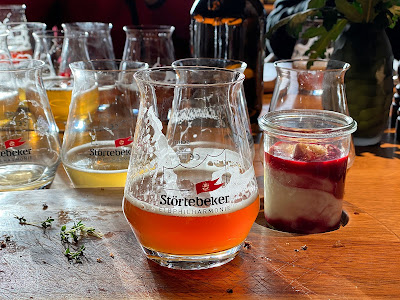 5. All the sandwiches are gone. The substantial aromatic-fruity Eis Lager (9.8%) is served with mascarpone in a glass. The ice lager is increased in alcohol by freezing out about half the water but retaining the alcohol.

On New Year Eve, our group boarded a boat, the MS Hafen Hamburg, to celebrate the new year on the Elbe River. In Germany, New Year's Day is welcomed with noise and smoke from official and private fireworks. Apparently, about 20% of the yearly dose of fine dust is emitted during New Year's night. Could the money spent on fireworks find nobler causes? The air would be cleaner too. 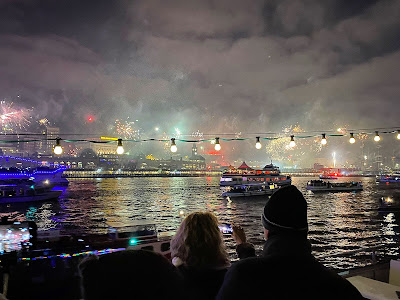 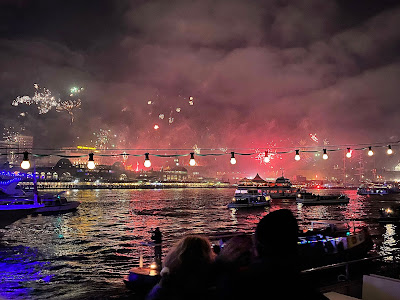 Before taking the train south, our group visited the Miniatur Wunderland on New Year's morning. We were walking from our hotel, still smelling the curse of the night's deeds. Red Baron reported earlier on this extraordinary exhibition. So here are just two new photos: