Today I read an article in my favorite newspaper about the Bundesstraße (Federal road) 500 that runs along the heights of the Black Forest. The B 500 was planned eighty years ago as Schwarzwaldhochstraße to make the high villages accessible to tourists. It runs from Waldshut in the south to Baden-Baden in the north although with a gap that has never been closed between Triberg and the Kniebis mountain. If you take this high road passing along the Titisee instead of Loch Lomond and I take the low road through the Rhine valley I'll be in Baden-Baden before you. 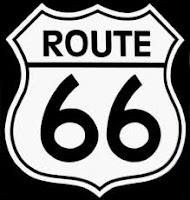 Known well for its panoramic views and its breath-taking scenery the B 500 has earned a new denomination among British motorbike tourists. They call it Germany's Route 66. Since the days of Nat King Cole who got his kicks on Route 66 it has always been a dream of me and many others to drive on it from Chicago to LA. In England however motor bikers question their colleagues returning from the continent: Did you take the B 500?


The British love the Rhine valley taking home a bottle of that sweet wine we produce for export only called Liebfrauenmilch and they love the Black Forest. The cake of the same name however they do not import but produce it in the UK with typically somewhat more chocolate than we use over here.
Eingestellt von Red Baron um 15:38 No comments:

To bike or rather not to bike in Freiburg

Congratulations to Madison being the fifth most 'bikeable' city in the States behind Minneapolis, Portland, Ore., San Francisco (with all those hills), and Boston.

Freiburg is known as a bicycle city too. So I scanned the internet to learn about its ranking. What I found is disappointing for Freiburg does not figure among the first ten bicycle cities in Germany. These are: Münster, Kiel, Oberhausen, Hannover, Bremen, Leipzig, Bonn, Magdeburg, Bielefeld, and Karlsruhe.

I must admit, except for my yearly bicycle tour I am not a keen cyclist. Freiburg's city is in walking distance (20 minutes) from my apartment so I feel no need to use a bicycle. Still I am mostly concerned with cycling or cyclists in Freiburg because of their bad behavior towards pedestrians who therefore live dangerously. Just the other day a Kampfradler (fighting cyclist) ran over a friend of mine on a zebra crossing. The guy did not stop and when the victim stood up she luckily only had a broken finger. In fact, in Baden-Württemberg Freiburg has the sad reputation of having the highest accident rate concerning bicycles. Last year two people died, 83 were heavily injured and 461 had 'only' light injuries. It does not help that Münster has a bad reputation too of cyclists ignoring red traffic lights, cycling on narrow walk ways in the wrong direction, and slaloming with high speed through pedestrian zones and in addition only children (this is an obligation) and old people like me (my brain is the only part of my body that has still some value) wear helmets.

To remedy the situation Freiburg and Berlin together started a two year campaign Rücksichtsvoll im Straßenverkehr (When participating in road traffic be considerate). 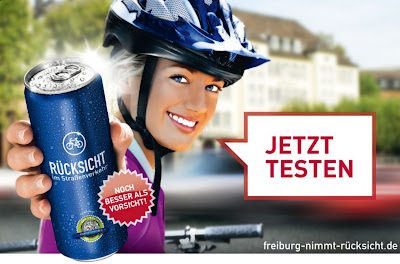 The advertising for the campaign is somewhat strange for green people look with disgust at the blue can. Cans had been banned in Germany for the sake of recycable bottles and are now celebrating merry resurrection. Will the campaign help to make life safer for Freiburg's pedestrians? I doubt.
Eingestellt von Red Baron um 14:26 1 comment:

How much Keynes we can still tolerate?

In their recent publication the Club of Rome take a guess how Mother Earth will look in 50 years. This and the result of two elections here in Europe made me think about our future too although I do not have too long to go anymore and I am an absolute layman in economics. For me the world economy is running wild in an egoistic manner. Reciting the mantra that our grandchildren should not pay for our sins (debts, CO2 output and climatic change, straining of natural resources) has degraded to a lip service.

Recently I watched Paul vs. Paul i.e. Senator Ron Paul and Nobel Prize winner Paul Krugman on television helplessly discussing how to remedy our economy. Their debate only confirmed my conviction that there is no cure to the economic situation the world is suffering from. The German economy often taken as a example that still works is mostly thriving on export. That makes the situation worse for the euro because our European trade partners finance their balance of trade deficits in making more debts. And what to think about my country that will loan 20 billion euros on the money market in these fat years of low unemployment and high tax revenues to keep this year's federal budget in balance?

That even Germany is not keeping to the strict norms of the European fiscal pact has given newly elected French president François Hollande the idea of asking for fresh i.e. borrowed money to stimulate the European economy just like Paul Krugman had said on television it should be done in the States. Printing euros is an easy process but where does that fresh money really go? We know that the euros Greece has received so far out of the Eurozone bailout fund were used to keep the Greek bank system afloat. I guess that the money François is asking for he has already earmarked to finance the re-lowering of the age of retirement in France from 62 to 60 years as he has promised. In the States there is no age of retirement. Contrary to me who was forced to retire at the age of 65 many of my American friends continued working beyond that age. So let us hope that in the States the financial stimulus Paul Krugman has asked for will be used to create new jobs.

New jobs are needed in Europe too especially in Spain were many young people are unemployed. Their No future outlook is social dynamite! So again with all the pressure building up it seems that the end of Merkosysm is near and public spending will heap more debts on the already unbelievable accumulated amount. Hastily our finance minister declared: It is the wrong way to take money one does not have to stimulate economic growth. Instead, he asked for more saving and reforms both at home and in Europe. With those different viewpoints in France and Germany will Merkollande replace Merkozy? We shall see when François will visit Angela in Berlin on May 15.


The obvious result of an increase in printed money is inflation meaning that for the average person the money he/she deposited in a saving bank will lose its value accentuated by the presently low interest rates. What will be the best way not to loose? Do not save your money but spend it and even have debts.

I shall end my story with a personal anecdote. When in my young years I wanted to build a house I needed a mortgage and consulted several banks for offers. One was particularly advantageous. When I asked the guy how come that my monthly installments will be so low compared with the proposals of the other banks he answered: O, you just pay the interest rate there is no back-payment. I said but then my children will inherit my debts. In those days such a situation was unacceptable for me so I choose the classical variant with another bank paying interest and amortization. Would I have acted the same in today's situation knowing that inflation will water down my children's debts?
Eingestellt von Red Baron um 10:19 No comments: