Where is the Iranian Flag?

Last Tuesday on January 3, a city councilor of the Christian Democratic party (CDU) asked the mayor to strike the Iranian flag flown on Freiburg's Kaiserbrücke because the Mullah administration in Teheran preaches the destruction of the Israeli state and threatens the world with war.

The back-story is that before the pope visited Freiburg the city had considered the status of the flags flown on Kaiserbrücke, one of the main entries into town. The flags were all dirty, many of them torn. Looking into their provisions the responsible persons located new national colors from Freiburg's partner cities and hoisted them.

Freiburg is the only city in Germany that has a sister city in Iran. The partnership with Isfahan was criticized in the past but the argument to keep it alive had always been based on person-to-person contacts with political contacts really non existing. The picture from Tuesday in the Badische Zeitung (BZ) shows the Iranian flag flanked by the English (Guildford) and the Ukrainian (Lviv) colors. Note that the Iranian flag is upside down. By the way, having the same patron saint England's and Freiburg's flags are identical both showing St. George's Cross. 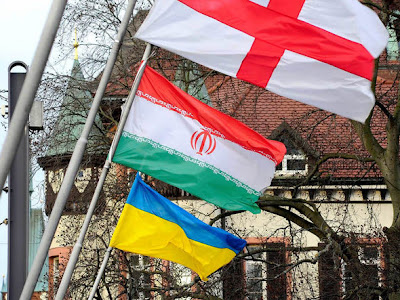 On the morning of Thursday, January 5, the Iranian flag had disappeared. The flag pole had been dismounted and was located below the bridge in the Dreisam River. Frustrated that he had been deprived of a media-effective striking of the Iranian flag, the city councilor was unhappy and called the action carried out under the cover of darkness vandalism.

Where is the Iranian flag? It seems that the never ending story of our fibbing president on the national scale eventually got its local counter part.

January 9: The Left Party (Die Linke) asked the city council to replace the Iranian flag as soon as possible: As long as countries like the US and Germany carry war and death into the world we should not dictate to the Iranians what to do.

January 12: Answering the request of Die Linke the city administration said that they have no ersatz flag in stock but they will soon publish a statement concerning who in the Building and Gardening Department is responsible for choosing the countries and flags to be flown in public places.

January 14: Today the BZ wrote: Neuer Dreh im Fahnen-Fall (New twist in the fall/case [it's a pun in German!] of the flag). The Association of the Friends of Tel Aviv (Israel) asked the Mayor to replace the missing Iranian flag as soon as possible claiming that the flag is a symbol of the Iranian people and not of the present administration. The CDU city councilor being himself member of this association did not understand his friends anymore and said: The flag stands for the Mullah regime. The CDU spokesman for the city council group had initially endorsed the move but now somehow paddled backwards saying: This issue needs to be discussed.

January 16: Today the youth organisation of Die Linke hoisted a home-made flag of the city of Isfahan as ersatz and in protest. For the left youth as for the Association of the Friends of Tel Aviv the stolen flag is a symbol of the partnership with Isfahan.

The city administration had the poor product removed and didn't comment whether for political or aesthetic reasons.

January18: The Christian Democrats are tired of the debate and propose to fly the flags of Freiburg's partner cities instead of the national flags. A city councilor of the Unabhängige Liste (Independent List) smirked: We note with pleasure that the CDU follows the proposal of Die Linke's youth organization. There are however complications as the city administration had already discovered that Wiwili (Nicaragua) does not have a city flag.

January 24: The city council wanted to end the farce and decided to stick to the national flags since not all partner cities have a proper flag. The German expression Freiburg zeigt Flagge means that Freiburg will again show the Iranian colors to honor its unique partnership with Isfahan. To continue with the saga a lady claimed from the off that the flag of Liberia must be shown too although the negotiations with its capital Monrovia for a partnership were put on ice in 1990.

January 27:  While the Association of the Friends of Tel Aviv welcomes the city council's decision the CDU is disappointed and commented: We have to think about further steps.


February 1: As announced: An Iranian flag is back and no longer upside down. Year of the Beer Garden

In 2012 Germany will celebrate the 300th birthday of Frederick the Great. It started already on January 2, with a commemorative stamp of 55 cents, the domestic postage for letters, i.e., the most common value. Many books were already written about the Prussian king in 2011, so that they were ready for last year's Christmas Season. 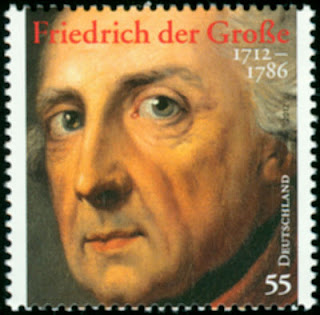 What Schiller once wrote about Wallenstein: Von der Parteien Gunst und Hass verwirrt, schwankt sein Charakterbild in der Geschichte (His character sketch alternates, is perturbed by favor and hatred of opposing camps) he could have written about Frederick. Some consider the man, inventor the pre-emptive war, as one of the greatest warmongers in history chasing his infantrymen into enemy fire shouting: You dogs, do you want to live forever? For others, he is the enlightened monarch who made Prussia one of the Great Powers in his time, he practiced religious tolerance, he became in later years as Alter Fritz the first servant of his crippled people, and he assured his country's provisions in introducing the potato as a staple food. When Schiller was once asked to write a hymn of praise about Frederick, he said: I cannot grow fond of this guy (Ich kann diesen Charakter nicht liebgewinnen), and neither can I.

Let us instead switch to the Year of the Beer Garden. Precisely 200 years ago, on January 4, 1812, King Max I of Bavaria (Where else?) decreed that breweries are allowed to serve their beer on top of their beer cellars. How come?

In those times, cooling equipment did not exist. So during the winter, brewers cut out thick ice plates from the frozen Upper Bavarian lakes, transported them to Munich, and stored them in deeply dug cellars near their breweries together with the beer. To avoid the sun heating up the top of those caves, the brewers planted chestnut trees on top, providing some shade. During the summer season, people came to the caves and bought their cold beer in pitchers. However, some of them could not wait to drink the brew at home but instead settled underneath the chestnut trees emptying the pitcher together with some food they had brought from home. This habit did not please the nearby innkeepers. Starting in 1791, a long legal and sometimes physical battle (Willst raufi?) between them and the breweries resulted. It was not until 1812 that King Max gave those breweries the right to sell their beer in their chestnut shadowed gardens provided guests are allowed to bring their own food.

Whether the latter rule is valid in Baden-Württemberg too, I shall test during the coming summer holidays at Toni's beautiful chestnut garden* taking along my home-made Brotzeit.
*also on Facebook
Eingestellt von Red Baron um 18:01 No comments: