What the Hell Is Religion?

Last Monday Gerald Urban, professor of physics, talked about: Religion, was zum Teufel ist das eigentlich? at the Freiburger Museumsgesellschaft. The announcement of this talk reminded me of a statement by one of my directors at CERN. When young hopefuls in high-energy physics complained about the lack of chairs at universities he said: A physicist can do anything ... almost. In fact, only few could expect to become a professor of high-energy physics but during that time there were ample openings in information technology. These are nowadays taken by people with a special education in IT. So a physicist talking about religion?

Professor Urban told the audience that it had been his personal interest to understand what religion really is. He has tried to address the question using a scientific approach and blamed the church fathers for having successfully hindered the development of science for centuries. For Augustine science is just an ancillary discipline and faith surpasses knowledge whereas Jerome (Hieronymus) regards philology as important only when reading and translating the Bible. While the Latin version of the New Testament, the vulgate, is the basis of Christianity the historical development of the Church was more influenced by the writings of the church fathers. The Reformation did not change this for both Erasmus and Luther heavily relied on the church fathers. 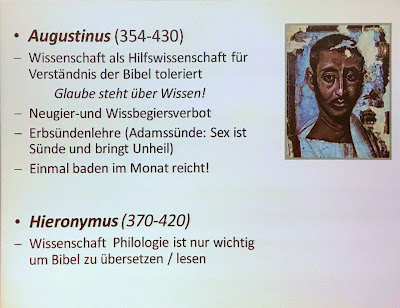 While Wikipedia tries to define "religion" as either substantialist (the transcendent holiness, the religious feeling) or functionalist (the community) these two definitions are not exclusive. 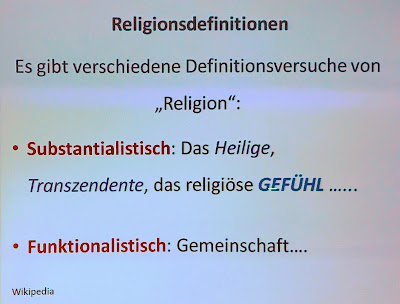 In one of his slides Professor Urban presented a collection of material with two main categories "religion" and "religiosity". 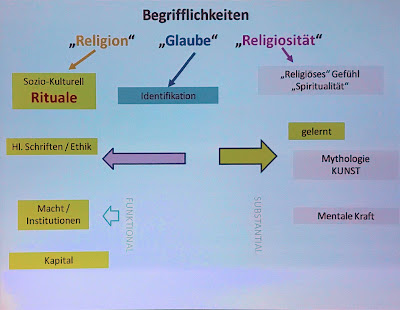 The process of religion has its origin in the observation of our environment when the amazement about its incomprehensibility reaches our brains. Explanation attempts lead to "world models" aiming to answer the question of the meaning or purpose of our existence. This process is by no means static but of a burning dynamic. 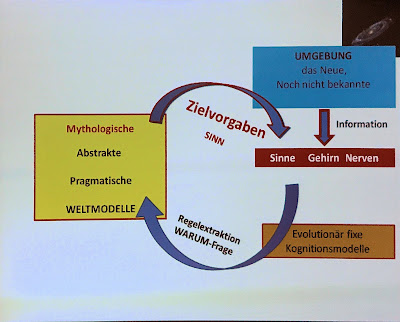 At this point Einstein's "definition" of religion may be helpful:

Other quotations from Einstein deepen his conviction: Every scientist becomes convinced that the laws of nature manifest the existence of a spirit vastly superior to that of men. Behind all the discernible concatenations, there remains something subtle, intangible and inexplicable. Veneration for this force is my religion. To that extent, I am in point of fact, religious.

There is harmony in the cosmos which I, with my limited human mind, am able to recognise, yet there are people who say there is no God. But what really makes me angry is that they quote me to support such views ... I am not an atheist, and I don’t think I can call myself a pantheist ... but there are the fanatical atheists whose intolerance is of the same kind as the intolerance of the religious fanatics and comes from the same source. Professor Urban placed a "complete" overview into his last slide. Religions eventually arrive at "closed" world models pointing to their last mysteries. Religious groups close themselves off and will fight other groups in bloody wars: Templars against Saracens, Catholics against Lutherans and both against Calvinists and Anabaptists, Shiites against Sunnites. Where do brotherly love or even the Christian love of the enemy come in?

What makes me sick is that while only few are fanatic in their religious practice and belief, many (mis)use their religion as an instrument of power either to suppress their people or as a pretext for "holy" wars. No war ever was, is, or will be holy.

Let me finish by congratulating Professor Urban on his efforts ending with a conciliatory quote by our eminent physicist: 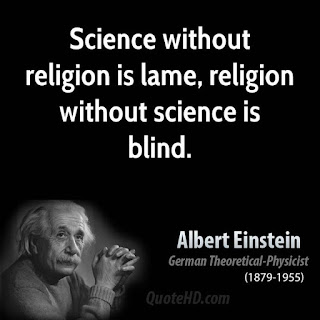 Freiburg. Last Monday the Badische Zeitung proudly presented data showing that Freiburg has Germany's youngest population. Even Red Baron is not old enough to spoil the average figure of 39.8 years. The map clearly shows that older people live in the rural districts of the eastern part of Germany, i.e., in the former GDR. Young people move into the cities (e.g. Berlin, Dresden, and Leipzig) where the action is and where they find jobs.

The following photo illustrates the facts. Young mothers and even fathers invade Freiburg's streetcars with their strollers and sometimes twin buggies for the city counted 124 twin births in 2016. Also this number is increasing with the years for more and more young men evidence low sperm count so couples are seeking help in in vitro insemination. To be on the safe side doctors tend to implant more than one fertilized oocyte.

Another fact is that more boys (2729) than girls (2609) were born in 2016. In my youth I was told that Mother Nature takes into account that men are the weaker sex and more baby boys die during their first year. With modern medical care this is no longer true. So 25 years from now I expect those young men will be fighting for the "rare" girls.
Eingestellt von Red Baron um 15:30 No comments:

Erasmus's Translation of the New Testament and the Reformation

This morning Red Baron was at the university listening to a lecture by Professor Henk Jan de Jonge of the University of Leiden, the Netherlands. His topic, Erasmus's Translation of the New Testament and the Reformation, is highly relevant in the year when Lutherans all over the world are commemorating 500 years of Reformation. 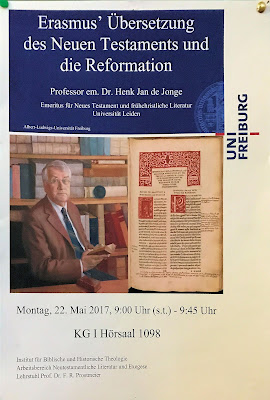 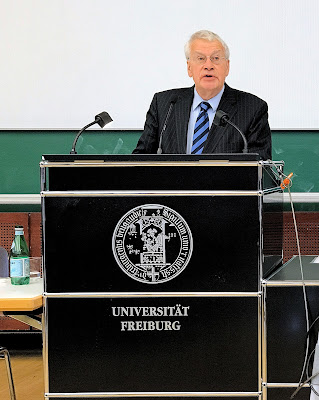 The renowned expert in the field Professor Jan de Jonge told the audience that the initial purpose of Erasmus was to write a Latin text more elegant then the Vulgata. His translation of the New Testament from the hand-written Greek urtext is based on classical Latin as written by Cicero, Caesar, Sallust, Livius, and Quintilian. Erasmus went back to the Greek roots (ad fontes). He did not want to replace the Latin Vulgata that dates back to the 4th century but rather eliminate corrupt text passages and correct mistranslations.

According to Erasmus one should translate not ad verbum (word-for-word) but ad sensum (sinngemäß or meaning-based). Any translation is just a recommandation and does not determine the meaning. Erasmus had the hope that in his time of religious turmoil, i.e., during the Reformation his new translation would contribute to the renewal of Christianity.

For his translation of the New Testament into German Martin Luther used Erasmus's "best" Latin version but the interpretation with the help of many new German words he invented was all his. In fact, the significance of Erasmus's work is not so much the better Latin of the Novum Instrumentum to be used by theologists and educated people but the opening for other, additional, and newer translations and interpretations. This is why Catholics for centuries were not allowed to read other Bibles than those authorized by Rome. In the 19th century ironically Protestant theologists started scrutinizing and questioning Luther's text going again back to the roots (ad fontes). As times change so do translations and interpretations of the Bible.
Eingestellt von Red Baron um 17:16 No comments:

Yesterday the Madison Symphony Chorus (MSC) was in town. Before they gave their concert in the evening they had to rehearse Ein Deutsches Requiem together with a local orchestra and a local choir in the morning.

In the afternoon the Freiburg-Madison-Gesellschaft (FMG) had organized a reception at the Greiffenegg-Schlössle. The weather was somewhat cold but sunny so we met outside in a corner of the Schlössle's famous Kastanien-Biergarten (chestnut beergarden) for a glass of sparkling wine and Flammkuchen (tarte flambée). As Bing Crosby put it in the movie High Society it wasn't French champagne but domestic.


Farmers' tractors were blocking the streets to protest a new quarter the city of Freiburg would like to build partly on farmland. Freiburg has a severe housing shortage and the new quarter called Dietenbach is an absolute must. Fact is, too many people are moving to Freiburg, Germany's number one Wohlfühlstadt (feel-good city). 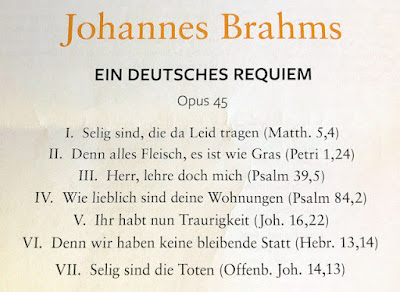 Before the Concert began in the evening I had been asked to welcome the musicians and the public at the Konrad und Elisabeth Kirche. Here is what I said:

My name is Manfred Höfert and I am the spokesperson of the Freiburg-Madison-Gesellschaft, the Freiburg sister city committee.

On behalf of our Gesellschaft, the Carl-Schurz-Haus and the City of Freiburg I would like to welcome the Madison Symphony Chorus, die Junge Kammerphilharmonie Freiburg und das Vocalensemble Breisach.

It is an honor that on its first visit to Europe the Chorus first came to Madison's sister city. May I say "Freiburg first"? On tour in Germany the Chorus will next perform in Leipzig and in Berlin. I wish you for tonight and for your upcoming concerts all the best.

The Konrad und Elisabeth Kirche we are in, is a historical landmark. It was built in the late 1920s and it is one of the first churches constructed in exposed concrete. St. Konrad and Elisabeth was consecrated in 1930. May I say that this church is as venerable as the Madison Symphony Chorus? 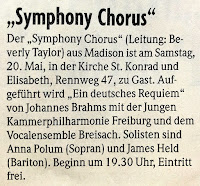 Last Sunday Red Baron followed the live-streamed inauguration of France's newly elected President Emmanuel Macron on Facebook. While I was watching I took some screenshots that I would like to share with you.

Macron arrived in a relatively small car and was greeted by President François Hollande at the steps of the Élysée Palace while dignitaries were waiting inside in a hall.

In the meantime the cameras showed some interesting scenes while people were waiting.

On Monday President Macron was in Berlin. Traditionally the first foreign trip of a newly elected French president is to Germany while a newly elected chancellor visits Paris first. Both leaders agreed to advance the European Union.