With great interest I follow the hefty altercation in the State of Wisconsin about budget cuts that has resulted in a showdown between the Governor and state employees. The day before yesterday even Freiburg's local newspaper Badische Zeitung published an article about the social unrest in Madison.

Without being able to judge the situation and refraining from comments about the affair two side issues that have occupied my thoughts. There apparently are subtle differences in the understanding of democracy in the States and in Germany. I saw masses of protesters holding up panels with various slogans inside Madison's Capitol Building. It must have been physically difficult for senators to reach their chamber not to mention the psychological effect such protesters certainly have on legislators. 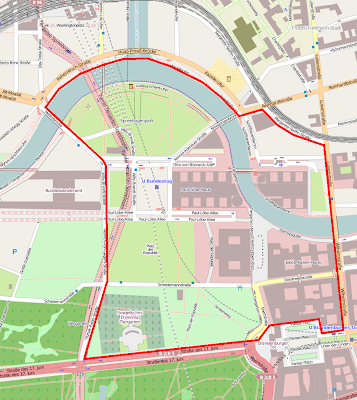 That protesting crowds invade the building of a state parliament or the Bundestag in Berlin is unthinkable in Germany. While parliaments are in session protesters are not allowed within a defined perimeter around the building such that deputies may exercise their debates and votes undisturbed. The map taken from the German Wikipedia shows the perimeter around the Reichstag building in Berlin called Bannmeile. It is not called kilometer but mile based on the measure of distance used in the various German territories before Germany's unification in 1871. The Second Reich not only adopted the (French) metric system such that all people should use the same measure for distances and weight but introduced a common currency, the Reichsmark, as well. Not even being a mile the Bannmeile around the Reichstag is just a few hundred meters wide. Inside the perimeter you find buildings where rooms for committee meetings are located too. The Bannmeile is valid only during scheduled sessions of the Bundestag.

In Germany protests are frequent and after all considered a serious business because in principle authorities must be informed before and authorize the protest. Nevertheless you find authorized and un-authorized protesters everywhere. Sometimes I have the impression some of the participants are professionals traveling from protest to protest all over Germany. Authorized protests even are protected by the police against anti-protesters. There is a continuous protest in Freiburg each first Monday of the month against Hartz IV, a bundle of social laws that way back in history the Schröder government had passed. It is heart-warming to watch the lonely policeman walking along the marching half-dozen people until they settle on Freiburg's Rathausplatz but only allowed when our city parliament is not in session.

The other minor difference between our democracies is that apparently in the States deputies can be forced to be present for voting. In Germany deputies simply walk out of their respective parliaments unhampered to the point that the quorum is no longer reached. In the States it seems that Wisconsin senators not willing to vote crossed the State boundary to be safe against the intervention by whom? Does the governor? call in the State troopers? to take senators having left the chamber back to their working place, hand-cuffed? That is what I would call a forced democracy. Next week I would like to learn more about these procedures when I am in Madison.
Eingestellt von Red Baron um 09:32 No comments:

A Monument for Apo

When reading the other day in my favorite newspaper the headline: A monument for "Apo" I was somewhat disturbed. Apo, this is how my grandchildren call me and not Opa, being the standard form for grandpa in German. It happened when my oldest grandson started to speak that he used Apo instead of Opa so that the younger grandchildren adopted Apo as well. Elisabeth is called in an even kinder way Ami (French for friend) instead of Omi oder Oma. Our odd names help to distinguish us from the other grandparents.

What about the monument? Reading the article it turned out that people from a community outside Freiburg indeed had erected a statue for their defunct pharmacist (in German Apotheker) called Apo who had rendered outstanding services to local clubs and societies.

Just to tell you I am still alive!
Eingestellt von Red Baron um 15:34 No comments:

Today in the Sunday Newspaper I read an article about the blessed Bernhard of Baden and how all attempts so far had failed to make him a saint. Having studied regional history for nearly a decade I was shocked that I hadn't read about him earlier.

Margrave Bernhard lived from 1428 until 1458 when he died from the plague in Moncalieri, Italy. Little is known about Bernhard and is this scanty information worthy of a saint? He as all rulers of that, earlier and later times tried to find glory in war activities. So in 1453 Bernhard led a group of mercenaries to Italy to conquer Naples for his uncle René of Anjou.

But mind you there are just and unjust wars depending from which side you are looking. What makes Bernhard worthy in the eyes of the Church is his call for a crusade against the Turks, who had taken Constantinople in 1453. They called the city Istanbul what according to a song of the 70ies anyway is nobody's business than the Turks. What helps in Bernhard's canonization process is that this crusade with all its war atrocities never took place such that the Battle of Varna in 1444 is considered to be the last crusade.

Now Freiburg's archbishop makes another attempt to convince the Congregation for the Causes of Saints of Bernhard's holiness. I regard this with envy for who is looking into Blessed Manfred’s cause (see previous blog).
Eingestellt von Red Baron um 14:40 No comments:

The other day I visited the Hohenstaufer Exhibition at Mannheim. Time was too short to see all the interesting exhibits but there was one name, my own, that fascinated me. 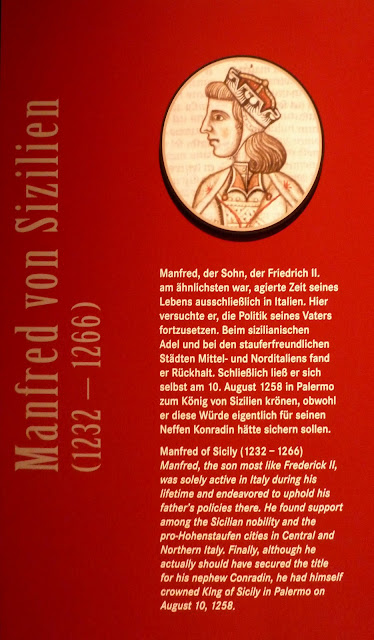 Manfred, King of Sicily, and son of Emperor Frederick II. What a consolation! Although he never became German Emperor I finally found an interesting man carrying my name. What else do we have?


I don't have a Saint but just the blessed Manfred of Rive commemorated on January 28.

There is the famous physisist Manfred von Ardenne who changed his socks from brown to red and still managed to lead a luxurious and happy life.


Manfred, the Symphony in B minor, Op. 58, composed by Pyotr Ilyich Tchaikovsky The symphony treats Manfred's incest with his step sister that is not relevant since I do not have a sister.
Remains Manfred von Richthofen, the Prussian junker, racist, arrogant, flying an airplane in the First World War painted in red, a daredevil par excellence. This guy at least was so prominent that he carried several nicknames: The Red Baron, The Red Battle Flyer, Red Devil, Le Diable Rouge, Le petit Rouge, and the Red Knight. He himself used the name The Red Fighter Pilot as title of his memoirs of 1917.

This morning on the title page of the Badische Zeitung I read the word Murmeltiertag and wondered if in addition to Halloween we had imported the Groundhog Day from the States.

Here in Freiburg we have no zoo proper but a farm transformed into a vivarium where children and adults may observe domestic and some exotic animals in a natural environment. No groundhogs live there. So what can we do? The chief keeper was interviewed and he answered that Freiburg’s groundhogs are the water turtles. If they come out and stay for a week then the frosty period is over. As presently their pond is frozen; spring is still far away. 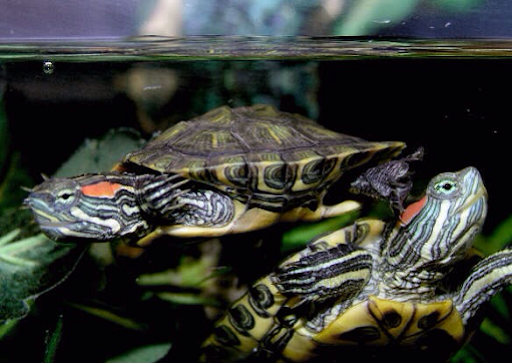 In Geneva it is not an animal but the chestnut tree de la Treille that with its first leaf will announce: Spring is icumen in.

Let us agree: any sign will be good. We are all waiting for Spring!
Eingestellt von Red Baron um 18:08 No comments: