... was the motto of this year's What's Brewing, a yearly craft beer workshop, at the Carl-Schurz-Haus. In its third edition, the CSH beer workshop directed by Frank Geeraers (Flanders/Freiburg) and changing partners is surely attaining cult status. This year Joe Stange (Missouri/Berlin), a proven beer expert, was the second master of ceremonies who likes to drink local but always thinks global. The requests to attend the event were so numerous that the workshop had to be repeated the following evening.

The exchange of brewers between the two continents is flourishing. In the beginning, Americans came to Europe learning and trying hard to overcome the beer without flavor from their large breweries. The resulting craft beer boom in the States then swept back to Europe with brewers "pilgrimaging" to the States learning in turn how to brew beers different from the European Einheitsplörre (uniform dishwater) within the limitation of the German Reinheitsgebot. In the meantime, craft beer has reached a 20% market share in the US.


Let us start. The first beer the workshop participants tasted was Mahrs Bräu Kellerbier hefetrüb ungespundet (cellar beer yeast clouded unbunged), i.e., the CO2-pressure is kept low during the brewing process. Founded in 1670, the Mahr brewery at Bamberg was initially spelled Mahr's Bräu according to the correct German orthography still valid in the 19th century.


Although they could have kept the historical apostrophe (cool), they did not want to be called Deppen (goofs) and are slowly changing their name to the now orthographically correct Mahrs Bräu. That, however, should be no problem for the visitor drinking Mahr's beer local at Bamberg; just simply ask for a "U," and the waitress will bring the right stuff. The "U" is a yeast-turbid specialty beer with a full-bodied, smooth malt character. Pleasantly tart and lightly carbonated.

It was a good start, and we were looking forward to Citrilla Maisels and Friends, an IPA wheat beer (!), or Bavaria meets California. In fact, Citrilla has flavors of fruity hop (Citra and Amarillo) and yeast combined with pineapple, lime, citrus fruit, and ripe banana. Citrella is likewise refreshing and a full-bodied beer.

Number three served was Berliner Berg, a lager beer in the German tradition brewed in Neukölln borough of Berlin, looking, smelling, and tasting like a lager. Brewed by an "American in Berlin" using a new German aromatic hop, you could call the beer global.


There was a short drinking pause and suspense when suddenly the door opened, and Frank and Joe entered the room with trays full of plastic cups filled with dark beer. In fact, we were served two different beers that we had to keep separated, placing them to our left and to our right. Were we supposed to drink beidhändig (two-handed)? Not at all; we simply were asked to compare two dark beers.

Red Baron likes Schwarzbier, and we learned that there is more to it than just the Thuringian Köstritzer* served all over Germany. On our LHS, we tasted Bräunlinger Black Lion; on our RHS, we drank the New Belgium 1554 Enlightened Black Lager. Founded like Freiburg by the Zähringen dynasty, Bräunlingen is located 60 km east of Freiburg in the Black Forest. For me, the Black Lion was a local beer while the Enlightened Black Lager from Fort Collins, Colorado, had traveled nearly halfway across the globe.
*Not to be confused with the Saxon dark beer brewed in Krostitz Red Baron drank in Leipzig

Both beers were aromatic, the Black Lion quite subtle, not sweet, and in keeping with my taste. The Enlightened Black Lager was slightly sweet and had, in my opinion, too much flavor.

When I traveled in the States in the 80s and 90s imbibing soft drinks and lite beer I always wondered why the Americans did not jump on a glass that is sparkling, slightly sour but adjustable by adding fruity syrup, low on alcohol, and which above all goes down well, i.e., a drink in the style of Berliner Weiße? Red Baron loves to drink Weiße mit Schuss (woodruff syrup) when in Berlin, i.e., local, but is Berliner Kindl Weiße all there is to it? Did the white beers my father, born in Berlin, once drank taste different from today's Weiße?

My two questions were partially answered when Joe presented a graphic drawn on a coaster showing that the onset of the output of Berliner Weisse-type beer in the States started as late as 2007. Since then, the numbers of breweries and white beer lovers have increased exponentially.

Is there a Weiße beyond the mass-produced stuff you are generally served in Berlin? We tasted Schneeeule Marlene (Snowy Owl Marlene Dietrich), obviously without Schuss. According to the experts, the yeast is the important ingredient. For Snowy Owl, it was recultured using traces of yeast that were discovered in 40-year-old Berliner Weiße bottles from the former GDR. Following the two dark beers, Schneeeule Marlene turned out to be a refreshing surprise.

The workshop continued on a sour note with Otra Vez. On the brewer's website, you find the following text: On our search for the perfect warm-weather beer, we wanted something light bodied and thirst-quenching, yet filled with complex and interesting flavors. We stumbled across the fruit of the prickly pear cactus, native to California. This tangy fruit is a great complement to the tart and refreshing traditional gose style beer. Otra Vez combines prickly pear cactus with a hint of grapefruit for a refreshing beer that will have you calling for round after round. Otra Vez!

In my opinion, Otra Vez had too much taste. What is a great flavor for some people is sometimes obtrusive for me. It seems that quite some craft brewers put their pride into beers with rich content because the market asks for this. Red Baron likes soft notes both with drinks and food. I still remember the first workshop when Frank warned that taste buds, once saturated by strongly hopped beers, become unable to sense subtle notes in milder beers served later. The same is correct for cheese tasting: Eat your Roquefort last!

The Alaskan Smoked Porter 2013 served next was over-flavored too. Somehow the Berliner Weiße history was repeated when the brewers stated that German-style Rauchbier, i.e., a smoke-flavored beer was virtually unknown in the U.S. until Alaskan Smoked Porter was developed in 1988. The porter is produced in limited “vintages” each year around November 1 and unlike most beers, may be aged in the bottle, much like fine wine. The beer we drank was brewed in 2013, and as stated on the label is best before the end of 2026 and counting.

This flavor bomb from New York ended the official part of the workshop. Still, Frank being homesick (?) opened a final bottle brewed in his home country called Deux Amis (Two Friends), a product of cultural exchange between Belgium’s Brasserie Dupont and America’s Lost Abbey Brewery. Deux Amis is brewed in Belgium using techniques perfected over almost a hundred years, Deux Amis receives its decidedly state-side flavor from the addition of American Amarillo and Simcoe hops. The result of this kinship is a dry, refreshing Old World Saison* full of peppery spice that finishes with New World flavors of floral orange and earthy pine.
*Copied as such. French for season 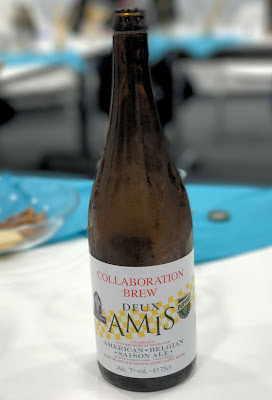 This propitiatory drink summarized the think global motto of the workshop well. Bringing the traditional style of beer from the old world together with refreshing new ideas from the other side of the Atlantic results in most astonishing brews as some of those served at the workshop illustrated perfectly.

Thank you, Frank and Joe, for this entertaining and informative evening.
Eingestellt von Red Baron um 16:53