With Wisconsin's 14 Democrat Senators having fled their State, Republican Governor Scott Walker's contested budget repair bill cannot be passed. The Republicans have a majority in Wisconsin's upper house alright, but for passing a bill touching on financial matters, the quorum is needed. With the Democrat Senators absent, the upper chamber falls short of the number required by just one vote.

Among those 14 expatriated Democrats, Fred Risser is an outstanding person. Senator Risser has served Wisconsin for 55 years in the legislature and is the longest-serving state legislator in American political history. When in 2009 the Freiburg-Madison Gesellschaft had organized a trip to Madison Senator Risser - then 81 years old - showed us his working place in the Capitol and explained to us the working of the two-chamber legislature on the State and Federal level. Nobody could foresee that this personality now "hides" in Illinois out of the range of Wisconsin troopers who received an order to "escort" at least one Democrat Senator back into Wisconsin's Senate Chamber.

The picture below copied from a local newspaper shows Risser end of February 2011 together with State Senator Robert Rauch changing hotels in Illinois (frequently) to avoid harassment by Tea Party activists. Fred wears a red cap, but all my American friends keep telling me that this has no political significance. 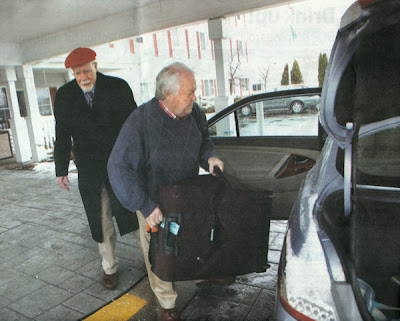