Those who read my blogs know that I try to eat local food wherever I go. This quite naturally is lobster in Boston and Speckscholle or Labskaus in Hamburg.

In considering regional food and drink as a cultural heritage I stuck to the habit during my recent trip to Thuringia where I attended the Thüringer Bachwochen. The evening before our group set out for Bach's birthplace Eisenach we had dinner together at Zum schwarzen Bären (the Black Bear) Weimar’s oldest inn adjacent to the Elephant Hotel. 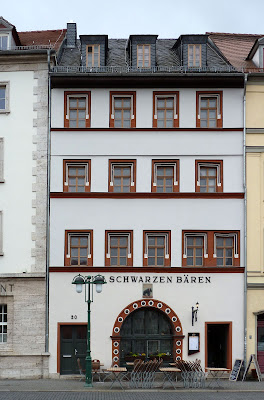 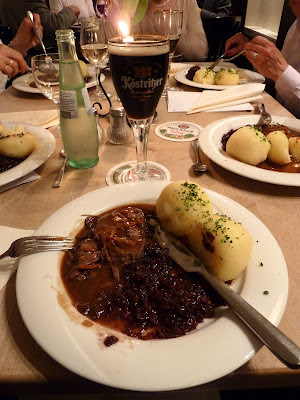 The quality of a Sauerbraten solely depends on the quality of the meat and the duration of marinating. Sauerbraten is known throughout Germany but there are important regional differences in the preparation. In the Rhineland e. g. they add raisins to the gravy. 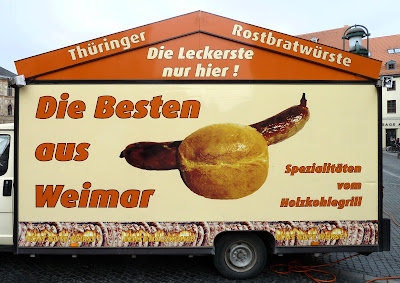 The next day in Eisenach we had nearly no carnal but an over input of spiritual food. This meant that the following day back in Weimar I could tolerate for lunch a Thüringer Bratwurst on the market and a full meal the evening.

Traveler whenever you come to Weimar do not forget to taste a Thüringer Bratwurst on Weimar's market place at Bianka's wurst stand and you will no longer eat a Thüringer in other parts of Germany.

The Thüringer in Weimar is prepared on a charcoal grill and 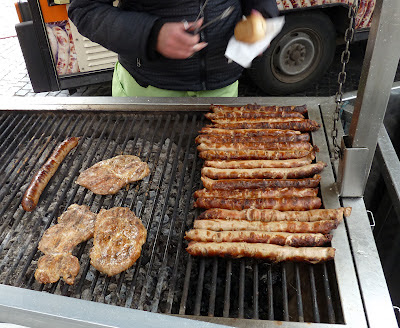 Bianka serves it in a bun: simply delicious! 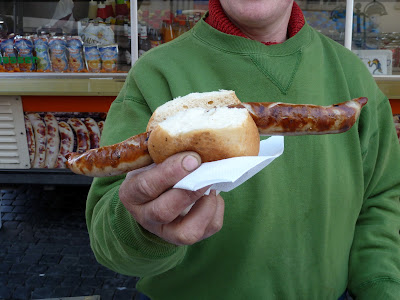 The evening I went to the restaurant Scharfe Ecke (Sharp Corner) where the Kloß-Marie (Dumpling-Mary) already greets you at the entrance. 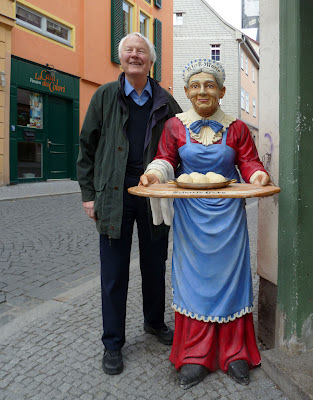 Two of the items on the menu caught my attention. So I opened with a local onion soup (quite different from the one they serve in France) garnished with Thuringian micro dumplings and plum mustard and 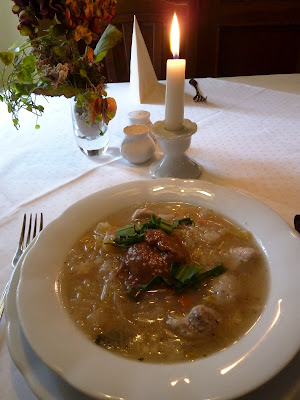 continued with a Thüringer Rostbrätel (a marinated cutlet of pig neck, that is grilled over charcoal) served with roasted onions and (what else?) a dumpling. 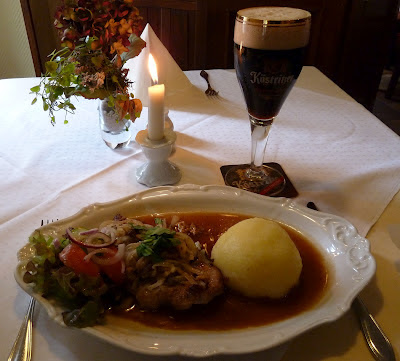 I drowned the food with two glasses of Köstritzer Schwarzbier vom Fass. Köstritzer is a local lager running from tap in most places in Weimar and you may have noticed that I stuck to it during my stay. 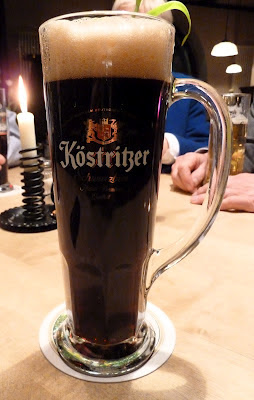 Above is the photo of what you get when you order a large beer in the north of Germany i. e. above the Main river line. On the pictured glass containing only 0.4 l of Schwarzbier you can barely read: Nach dem deutschen Reinheitsgebot, Köstritzer Schwarzbier (According to the German Beer Purity Law - it was originally Bavarian – Dark [black] lager from Köstritz).

The beer of only 0.4 l that is served in northern Germany the Southerners call a Preußenhalbe for when you order a small beer in southern Germany you get already eine Halbe i.e. half a liter or 0.5 l.

A similar situation arises for wine. When you order a Viertele in the south you logically get 0.25 l. However, when you order ein Viertel Wein in the north of Germany you get only 0.2 l , a Preußen-Viertele as we call it in Baden.
Eingestellt von Red Baron um 13:14