Johann Gottfried Seume (1763 - 1810) was a German writer, soldier, editor, frequent traveler, and late enlightener. He was born in Saxony and is rediscovered due to his 250th birthday on January 29 - as an extraordinary man of his time. Already last year, Bruno Preisendörfer published Seume's biography titled: Der waghalsige Reisende (The audacious traveler).

Audacious indeed, for in his most famous book Spaziergang nach Syrakus (Hike to Syracuse), Seume reports how he fell among the bandits on two occasions.

He started the long hike in Leipzig on December 6, 1802, which brought him to Prague, Vienna, Florence, Rome, Naples, Palermo, Syracuse. He returned to Leipzig in August 1803 via Florence, Basel, Paris, Strasbourg, Frankfort, still wearing his original boots.

Whereas I was impressed by the quality of his boots and more so by his fresh and unorthodox style Caroline Herder, wife of Gottfried Herder, was disgusted: Seume's hike is unbearable stuff full of arrogance, vulgarity, and gloating with faineance. Today people tend to compare Seume's travel account to Goethe's Italien Journey. However, Johann Wolfgang had already visited Italy and Sicily as early as 1786 to 1788 but wrote his account as late as 1813 to 1817. 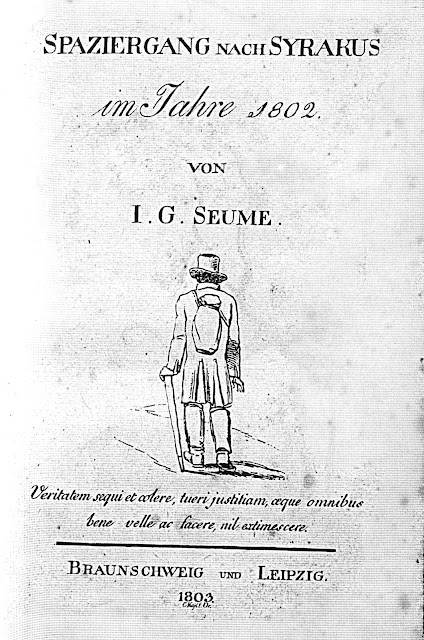 Seume's hike to Syracuse was not his only travel. Born as the son of a farmer in Saxony, the local pastor recognized young Gottfried's talent and provided good schooling so that in 1780 Seume started studying theology in Leipzig. But already one year later, he fled the university, for he had read books by the Earl of Shaftsbury (Inquiry concerning Virtue), the Viscount of Bolingbroke (Letters or Essays Addressed to Alexander Pope), and Pierre Bayle (Philosophical Commentaries) that had made him uneasy in his belief. Later he wrote in his Apokryphen: The reason for leaving Leipzig had been that I did not want to become one of those spitzköpfigen (pointed-headed) clergymen supporting the nobility to preserve their privileges and keeping those Flachköpfe (flat-headed country people) in slavery.

For Seume: Humbleness is the first step to perfidy. Despite all the Enlightenment that had officially abolished slavery in German territories, farmers, with the help of the Churches, were still kept in dependence and fear of their masters. Already Luther had written more than two centuries ago: Farmers must suffer injustice and bear evil, for even bad leaders come from God.


Leaving the university, Seume had intended to travel to Paris, but while crossing Hessian territory, a press gang apprehended him while he was staying overnight in Vach. From then on, despite all protest, the Landgrave of Kassel, the great white slaver of that time, looked after my future night's lodgings in Fort Ziegenhain, Kassel, and further on in the New World.

In 1776 Landgrave Friedrich of Hessen-Kassel signed a subsidy treaty with England, where he had to deliver 17,000 soldiers against 21 million talers. Friedrich, however, had problems filling the quota he had promised to King George III. All means were good for recruiting men being Hessians or foreigners. Bad luck for the Saxon Seume. He was in the wrong place at the wrong time. The press gang simply tore to shreds his university papers and enlisted him.

While navigating down the Weser River to Bremen, Seume had nightmares about the Roman General Quinctilius Varus, who had lost his legions in the dark German forests, and Saint Bonifacius, who had exorcized in his holy simplemindedness the heroic virtue and had spun the fine religious slavery that made the Germans the puppet of others.

The transport ship left Bremerhaven in June 1782. Because the Channel was infested with French and Spanish enemy ships, the convoy of transport, merchant, and battleships took the north route sailing by the Orkney Islands. Eventually, the forced soldiers only arrived in Halifax in September 1782. Seume had been helpful on the ship during the passage, so the captain approached him (English in Seume's original text): It is a pity, my boy, you do not stay with us; you would soon become an outstanding sailor. Heartily I would, Seume answered, but you see, it is impossible. The captain shouted: So it is. God speed you well!

Life in the Halifax camp was one-third of German usualness, Huron savageness, and English refinement. According to the individuals present, one of those thirds was predominant. In my case, it was primarily German.

Already the following year, the War of Independence was over, so Seume never saw any action. All Germans - if a rifleman had not perforated their lungs, a Huron had not taken their scalps, or they had not managed to escape joining the Republicans in Boston -eventually were shipped back to Europe for Landgrave Friedrich intended to sell his capture to Frederick the Great. Seume remembers: The convoy taking us to Europe comprised 200 ships, particularly two American frigates showing the new flag of the free States. For an old Englishman, a heartbreaking sight since Britannia ruled the waves.

To make a long story short. Shipped back, Seume served in Emden in the Prussian army. He escaped, went to Russia, and became adjutant of General Igelström, who had been charged with suppressing the Polish uprising of 1794 against the Russians in Warsaw.


Before his final journey Seume visited the Nordic countries in 1805. His journal titled Mein Sommer im Jahr 1805 (My Summer in the year of 1805) was so politically charged that no publisher dared to print it.

Seume was a remarkable person: I don't drink any wine, no coffee, no liquor, don't smoke or snort. I eat the simplest food and was never ill, neither at sea nor at any point of the compass. On the other hand, he stated: I lived much and wrote little. That is better than the other way around. Because of his virtues and his small needs, old Wieland called him the noble cynic, a man of great value.
*
Eingestellt von Red Baron um 16:21