This is not my title, but the title of the first German-American Dialogue Baden-Wuerttemberg Red Baron went to last week. I personally experienced my digital development more as an evolution rather than as a revolution. I started with punched cards in 1966, lived through the beginning of emails and the World Wide Web at CERN, and relied relatively early on silicon memory instead of brain cells for my appointments and tasks using pocket computers and smartphones.

In the framework of its "American Days," the Carl-Schurz-Haus and its dynamic director Friederike Schulte had organized the German-American Dialogue at  Freiburg's United World College, UWC Robert Bosch. 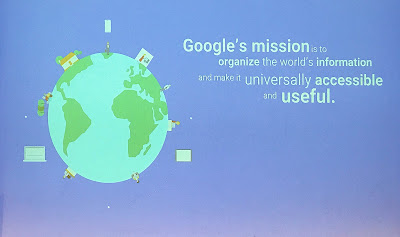 Yes, Google makes information universally accessible. A good example is the scanning of out-of-copyright books from Munich's University Library (Munich is the headquarters of Google Germany). I already thanked Google in a previous blog since the books by Hecker, Struve, Mördes, Morel, and company giving their view of the Badische Revolution are now available online and helped me round out my web site about the years 1848/49. Thanks again, Google. 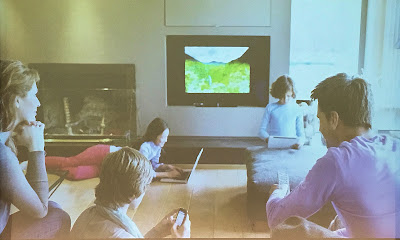 However, the next slide from John Geroso's presentation shows the absolute misery of the digital age. The family no longer watches television together, but members use or play with various electronic devices separately. The family is only connected via the internet. Let's face it: We live in an online world and sooner or later in Virtual Reality.

For me, the panel discussion on Identity and Living Together in the Digital Age started badly when the word "angst" was invoked. Indeed, nobody can say how far the digital world will take us. We are increasingly nerve-rackingly multitasking, sometimes even dangerous when driving and phoning, texting, or just simultaneously looking at one of our devices. One panel member talked about the industrialization of our brains; other members brought in "socialist" ideas and their Christian God.

Families have started to introduce rules when members may be online or offline, with parents frequently cheating. Because we communicate with virtual instead of face-to-face partners, the tone of conversation gets rougher, for it's easier to make insults online. How will the young generation transport digital mobbing into their upcoming family and professional lives?

Due to the lack of time, the discussion had to be limited to three questions from the audience, but I could get my query in. However, before the moderator handed me the microphone, he asked me - apparently doubting my competence when looking at my gray hair - whether I was on Facebook. I snappishly answered: Yes, but I use it my way and continued that angst regarding the digitized world is born out of ignorance.
The young generation has no problem with following digital developments. Nevertheless, it still may lack the maturity to use digital possibilities competently. The UWC psychologist answered that she got one message to the pupils: Many Likes do not strengthen your self-confidence. On that point, I think that her selected international elite clientele is not representative of the rest of the present young generation. I feel that society has yet come to grips with Facebook, Twitter, WhatsApp, and the rest.

The second panel, Rethinking Business, was somehow disjointed because panel members tended to talk about their particular interests, rarely listening to each other. John Geroso immediately contradicted the chairman's introductory remark that Only No.1 counts: Google does not feel like No.1 but instead thinks that competition will spur development or, as we say in German: Konkurrenz hebt das Geschäft.

It seems that you cannot simply transform an analog enterprise into a digital one. You'd better start from scratch. Existing firms must get agile. Some try to circumvent the problem by incorporating startups into their firms. Future enterprises will have no managers but ruling teams.

There was agreement that not everything that can be done in the digital world necessarily has to be done, although I have not yet seen an enterprise that does not use an opportunity to make money. The young generation criticized the exploitation of natural resources on which other panel members did not comment. When the specialist in robotics was asked whether robots can do all human activities, he answered yes, except they have no feelings. He then admitted that one of his robots had complained, messaging: I can simulate emotions.

During the long afternoon, some of the impacts of the digital revolution were addressed, and some were even discussed. Still, we are far from knowing the impact the digital world will have on future society. While it took two generations to get accustomed to the hard-wired telephone, analog television, or the automobile, it now takes only about 10 years before a "new" technology is already obsolete. It is this pace of development that leaves us little time to digest.
*
Eingestellt von Red Baron um 17:24