This blog will introduce splinters. Splinters are photos or events for which writing a whole blog would be like taking a sledgehammer for cracking a nut*.
*The German proverb is "Mit Kanonen auf Spatzen schießen" meaning taking a cannon to shoot sparrows.

In his show, my favorite Late Night host Stephen Colbert subsumes those fragments under the title Meanwhile. My splinters are mostly funny, too, but sometimes will complete or update the information contained in previous blogs.

Remember the Holbeinpferd? The foal had to lose weight, but removing the layers of paint took longer than initially thought for the total weight of its Speckmantel (wrapped up bacon) turned out to be 180 kg. 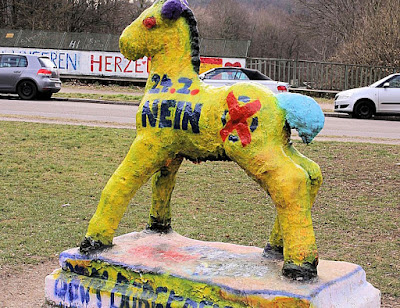 As an example of splinters, I am showing you some photos of the "cleaned" Holbeinpferdchen. 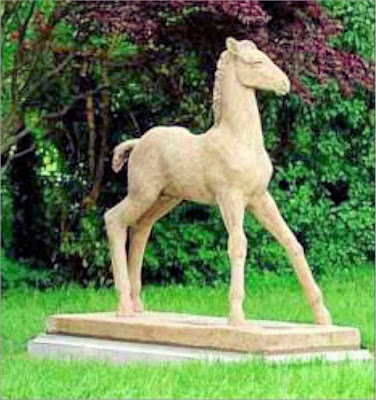 The cleaned foal was put back into place on Monday, June 3, but already on June 5, it showed the Dannebrog, the Danish flag. Was this because of the Danish national holiday on June 5, or was it an expression of joy that the Socialist party had won the national election the same day? Nobody knows.


Last week Red Baron was on tour with Freiburg's Museumsgesellschaft. I previously wrote blogs about those annual trips, e.g., to Burgundy or Alto Adige. This year we traveled to Schwäbisch Hall, and on our way, we visited the Maulbronn monastery. Here are some splinters from this trip.

Two pressed persons are in desperate need to return their drinks. 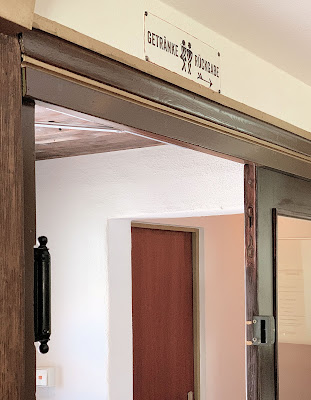 At the Scheffelhof, a restaurant at Maulbronn where our group had lunch, this sign pointed to the restrooms. 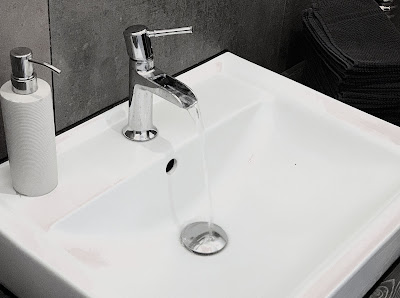 The surprise, however, came when washing my hands. Water was flowing from an open faucet resembling a water spring. Is this a reminiscence of the Cistercian monks who founded the Maulbronn monastery in 1147? For this monastic order flowing water was a condition sine qua non when choosing the sites for their monasteries. 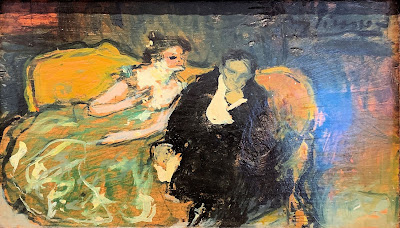 From the Würth* Collection at Schwäbisch Hall: Here is a painting by the young Pablo Picasso at the age of 19 in Paris without a sou (penny). In the absence of an expensive canvas, Picasso painted an expressionist scene on the cover of a wooden box.
*The Würths made all their money on screws, nuts, and bolts. 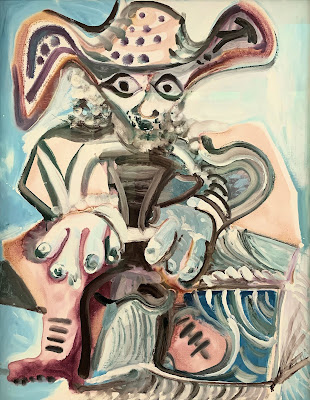 From the Ensemble Center Pompidou and Museum Frieder Burda at Baden-Baden: Here is Picasso's self-portrait huile sur toile one year before his death. The painting genius of the 20th century and lover or rather user of women was always afraid to die too early before having achieved what he had still on his mind. 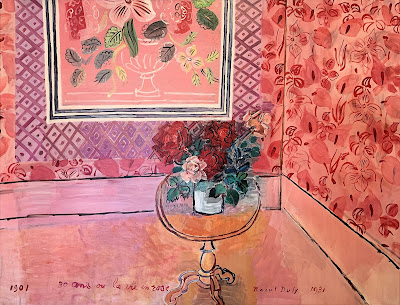 Picasso became 92, and while he was painting his last self-portrait unshaven and with eyes wide open and full of fear, he was possibly thinking back with nostalgia to his rose period of 1904 to 1906. Raoul Dufy painted les 30 ans ou la vie en rose in 1901 on display at the Würth Collection at Schwäbisch Hall. 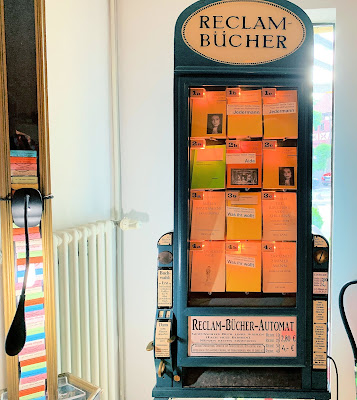 The Reclam publishers in Leipzig are still well known for their wohlfeil (cheap) booklets with classic texts. Generations of students read in class Reclam booklets of Schiller's Wilhelm Tell, Goethe's Faust, Shakespeare's Hamlet*, and writings of many other classical authors. Some of those booklets were so popular that in 1912, Reclam deployed coin machines in Germany filled with brochures of their most favorite authors. Here is a revived Reclam-Bücher-Automat, as seen in the lobby of our Hotel Hohenlohe in Schwäbisch Hall.
*in the famous Tieck and Schlegel translation