i.e., calls for perseverance we hear all the time. It is official that during the Easter holidays, the restrictions in Germany I wrote about will not be softened.

The governors of Schleswig-Holstein und Mecklenburg-Vorpommern warned residents of Hamburg, and Berlin, respectively,  not to make short trips to the Baltic Sea over the coming weekend. "Anyone planning an excursion on Easter has not understood the rules of conduct in Corona times and is behaving incorrectly," and anyway, the beaches are closed. Moving to and living in a secondary residence is strictly forbidden. Meanwhile, the Federal Republic, its states, and local authorities are preparing for the climax of the Corona pandemic expected next week.

In Freiburg, the presently useless exhibition halls were converted into an outpatient fever clinic. Individuals experiencing fever must first report to the family doctor who decides on sending them to the center.

Inside a vast hall, patients will be medically screened and tested for Corona in ten well-separated treatment rooms. In case of a Corona infection, patients will either be sent home into quarantine or transported to the university hospital for treatment.

On a national level, Germany currently has 40,000 beds equipped for intensive care, of which about 24,000 – with only a relatively few Corona cases so far - are occupied. Another 16,000 places are in preparation. Of the existing beds, 10,000 are equipped for artificial respiration. The bottleneck is the number of medical personnel trained to intubate patients in need.

The number of available beds varies from state to state, so for a centralized capture, the Robert Koch Institute (RKI) has established a register. In case of need, Corona patients shall be moved within Germany.

Due to our free capacities in intensive care, 119 Corona patients from Italy and France are being treated in Germany at the moment.

Due to the shortage of face masks, the situation is much confused. By now, everybody worldwide has learned that the advanced protection of FFP (Filtering Face Piece) masks must be reserved for doctors and nurses in hospitals. In fact, due to the lack of protective equipment, we experienced local outbreaks of Covid-19 in various nursing and old age homes with devastating consequences.

But even simple face masks are presently not available. Delivery of a modest order Red Baron placed today is scheduled for the middle of May. Meanwhile, the RKI keeps repeating the mantra that a face mask worn by an infected person protects the people around him/her and not the wearer himself. The problem is that an infected person not having any Corona symptoms may already be contagious without knowing it.

Even when distances are kept, the wearing of simple masks should be obligatory in crowded places like groceries, supermarkets, and public transport. Red Baron is convinced that such a practice would contribute to decreasing the number of infections. "Presently, we are looking for every small step that can reduce transmission - it adds up."


"In East Asia, many people are used to wearing masks when they are sick or when it's hay-fever season because it is considered impolite to be sneezing or coughing openly. The 2003 Sars virus outbreak affected several countries in the region. So one key difference between these societies and Western ones is that they have experienced contagion before - and the memories are still fresh and painful." 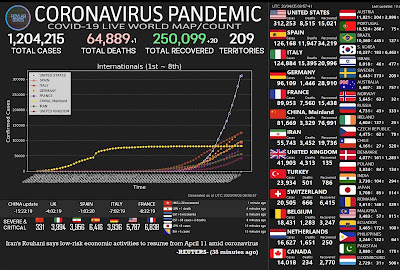 Yesterday I learned from television that presently, the number of Corona cases in Germany is doubling every 9 days. I calculated that this corresponds to an average daily increase of 7.2%.
I was told that not until the doubling of cases declines to every two weeks (corresponding to an average increase of 4.7% calculated per day) can Germany hope that life will very slowly start coming back to normal again.

Such a low doubling rate would possibly allow for the opening of shops and department stores but with only limited access, i.e., keeping distance between customers. Are restaurants places of social distancing? Big sports events will remain forbidden for a long time.

The most significant decision to be made by our government is whether kindergartens, schools, and universities may take up teaching activities soon.

Here are the daily Corona growth rates in percent for the States. Taking an average growth rate of presently 12%, the number of cases will double every 5 days.

The table shows (incomplete) data for the most affected countries worldwide.

There is a lot of pessimism in the air regarding the European Union.

Seeing dramas unfold outside their territory, national states fearing an uncontrolled spread of Corona have actually closed their borders. Their aim was to attack and solve the problem for their own people while keeping the borders open for goods and services. In fact, the latter caused increased rates of Corona infections in Germany's south and west, because the economies of Baden-Württemberg and Bavaria rely heavily on cross-border commuters.

While we can hope for improvements in the present pandemic situation over time, one sector will not recover until a vaccine against a Corona infection is available abundantly. I am referring to international tourism. Indeed, China actually claims that all "new" Corona cases seen on its territory are imported.

It is evident that in the near future, no German will risk traveling to Bella Italia. For Americans, Sinatra's "It's very nice to go trav'ling, to Paris, London, and Rome" will make way to "But it's so much nicer, yes it's so much nicer to stay home."

Even once a vaccine is available and used, the border guards will check on the validity of the vaccination certificate. Red Baron still remembers his first visit to the States in 1957 when proof of a valid vaccination against smallpox was required. The route across the Atlantic between Europe and the States used to be a racetrack. How many Boeings and Airbuses will be needed in the near and distant future?

There is life after Corona, but the world will be dramatically different.