On Sunday night, December 27, I read an article in the daily Badische Zeitung (BZ) on my iPad titled: Questions and answers concerning Freiburg’s Central Vaccination Center. This article appeared in its paper edition only the following Monday.

One paragraph headed, “How can I register?” found my full attention:

Registration is possible online via a central web platform that can be accessed at http://www.impfterminservice.de. Appointments for the vaccination center in Freiburg can be booked there. However, only for those over 80 years of age, people in need of care and those who work in care. Entitlement will then be rechecked in detail on-site at the vaccination center.

I immediately started to look for an appointment when the trouble started. After a long hour of frustration on the computer, I suddenly received a twelve-digit code and was assigned an appointment for February 7 at 8:30 a.m. Then the system asked me to reserve the date for the second shot of the Biontech/Pfizer vaccine too, but there I failed.

Some friends aged above 80 but mostly younger than me tried in vain the following morning to reserve a date at the Impfzentrum. 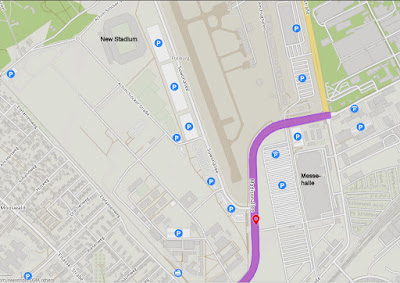 This morning I arrived 20 minutes early at the Impfzentrum. There were a few people in front of me, so I had to wait in line. The reception was as described in the BZ article:

The code and any certificates will be checked before entry to the exhibition hall. Inside, registration then takes place at set-up counters, where the health insurance card is also scanned. The vaccination center may only be entered wearing medical mouth-nose protection, which everyone should bring himself. If someone does not have such protection on hand, it will be provided by the center. All employees will wear FFP2 masks. A fever measurement will be taken at the entrance. Anyone with a body temperature above 37.5 degrees centigrade will not be allowed into the hall.

Following all this, I have been vaccinated against SARS-CoV-19 once and shall receive an invitation for my second shot.
Before we inoculated persons were allowed to leave the hall, we had to sit on chairs at appropriate distances. So I helped myself to a well-deserved espresso served at a small kiosk near the exit.

I was positively impressed by the diligence, competence, and friendliness of the staff. They easily could inoculate 2000 persons a day but are limited by the quantity of the vaccine so far delivered. In the meantime, they found out that instead of five, they can squeeze out six doses from a flacon.
Eingestellt von Red Baron um 21:10