I do not know why: although I was born in the city of Essen, whenever I hear the word, Essen Madison's Essen Haus instead comes to my mind. During my visits to our Sister City, I have never made it to the place. It looks such Bavarian features Gemuetilichkeit with an additional "i" and sports a charming selection of antique Hummels! Promise, next time in Madison, I shall visit Essen Haus.

The city name Essen has nothing to do with a meal or eat. Because of the heavy industry that boomed around the Ruhr River in the late 19th century, a pun was shared that the name Essen is derived from die Essen (German for the smokestacks). All wrong! The name Essen possibly derives from the common ash tree (Esche in modern German).

The big name in those times was Krupp, and boozing men used to boast: Was Krupp in Essen, sind wir im Trinken (What Krupp stands for in Essen we stand for in drinking).

This weekend I shall be in Essen for my yearly class reunion. I only had two years of primary school in Essen and later went to and finished high school in Hamburg. To make our gatherings more interesting, my former classmates change meeting places every year.

Here is an old photo from 1938. It shows a tiny Red Baron with his father in front of our house in Goldammerweg 4. No, the car is not an Audi; it is a DKW. 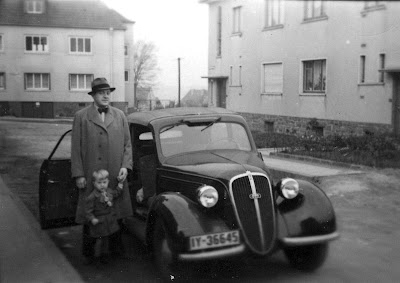 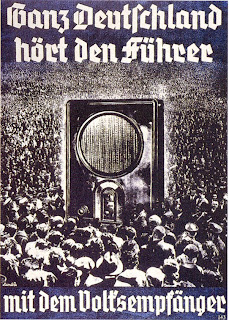 Later during World War II, when I visited my grandparents' farm in Westphalia, I suffered from the following teaser: In Essen gibt es große Schüsseln, aber nichts zum Fressen (In Essen there are big bowls, but there is nothing to eat). This was partly true, and indeed, I remember the big but simple meals my grandmother prepared on an enormous stove. Just across in the vast kitchen, I sat together with all the farmhands around a large wooden table. We dug into the food once my grandfather had said grace.

In the Herrgottswinkel (the corner where a crucifix hung), the only modern accessory set on a high shelf was the Volksempfänger (the people's wireless set). God and Goebbels, what a vicious combination! But that is a different story.
*
Eingestellt von Red Baron um 19:33