The site of the Wagenburglers - they call themselves Kommando Rhino (Rhino Command) - was cleared alright on August 2nd. 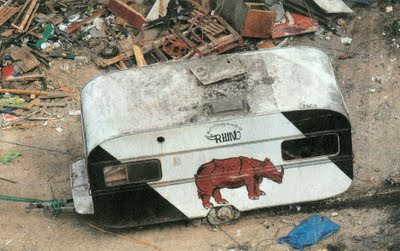 What remains visibel at the entrance to Vauban is a banner: We ♡ Rhino. 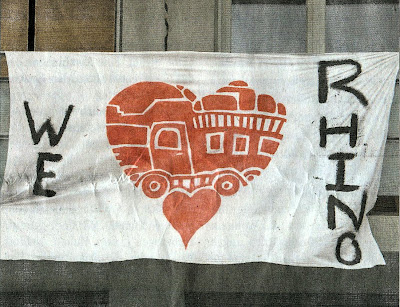 However, the problem with those people who like to practice their alternative living in Freiburg persists. The city doesn't want to provide them a plot fearing that once they give it to Rhino other people with more vehicles from outside Freiburg will move in. The Rhino Command on the other hand claims: The authorities cannot banish us. We will remain in Freiburg and in our mobile homes. 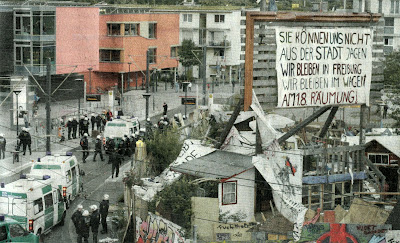 In fact, some moved to another plot in Vauban on which they will be tolerated for another month. Four of the vehicles had eventually settled on a private ground in the suburb of Zähringen. When on the owner's request the police arrived they first tried to confiscate the mobile homes which was counterproductive hindering the Rhinos to move. Before these Wagenburglers had stayed on individual private places but the four had moved together again as otherwise they claim they cannot practice their way of life. Although one Freiburg party official has said: Now it is finished as his party will vote against Rhino getting space on public grounds in Freiburg other city council members feel that the Wagenburgler question will remain on the agenda for a long time. They were right as on the same day when I wrote this blog the Wagenburglers opened a protest camp in front of the Rathaus (townhall) that the police soon cleared peacefully.

Meanwhile our local newspapers has figured out a lower limit of the costs for the police action on August 2nd including the damage caused by the nightly riot as being 371 100 euros. These are peanuts compared to the costs of the not so long ago riots in England.
Eingestellt von Red Baron um 16:25