In my first blog in 2012, I not only mentioned the 300th birthday of Frederick the Great commemorated in Germany, but I also reflected on the character of this Prussian king joining Schiller in his remark: I cannot get fond of that guy. 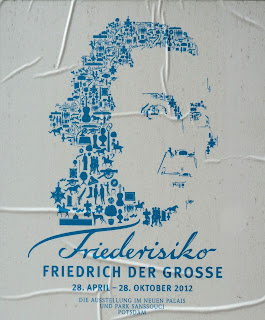 Presently in Frederick's residence, Potsdam, an exhibition in the New Palace named Friederisiko, tries to retrace the Prussian king's life, the title alluding to his frequently playing vabanque when at war. All through his early life, Frederick moaned: I must fight three women, Maria-Theresa of Austria, Madame de Pompadour of France, and Elisabeth of Russia. It is a historical fact that the sudden death of one of Frederick's archenemies, the Tsarina, averted Prussia's total military defeat. Her son and successor Peter, the king's great admirer, agreed to an armistice. This unexpected turn became known as the Miracle of the House of Brandenburg.

Following the peace-treaty of Hubertusburg, Frederick started not only rebuilding his country but also completing the park of Sans,souci. In constructing the New Palace, he wanted to show to the world that Prussia was still not on her knees, even had the financial resources to build such a useless building. In fact, Frederick preferred living in Sans,souci palace, and only used the New Palace for official receptions and for housing his guests. His successors preferred to stay in Berlin, Prussia's capital, and when in Potsdam resided in the cozier Charlottenhof.


While the guided tour concentrated on Frederick's Potsdam, we also visited Rheinsberg, where as a young man far away from his father's knout, the Prince had felt happy writing poetry, making music, and partying with friends. Frederick wrote: My entire mind is turned to philosophy. It does me good services. I am happy for I am much calmer than before.