With 160 000 inhabitants, Potsdam is smaller than Freiburg, where 220 000 people live. Houses in the city's old quarters are mostly only two stories high with rooms built into the roof for - Potsdam was a garrison town - housing soldiers. At the time of the Prussian kings, cuddling-up was encouraged, and many a man ended up in a rapid marriage with the landlord's daughter. The king needed soldiers. 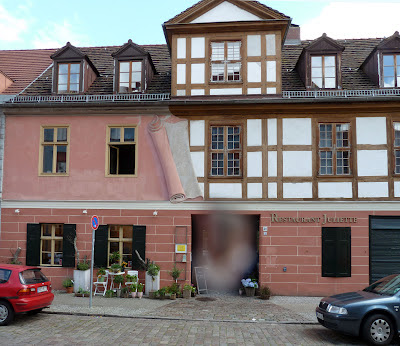 Although today these houses look like brick buildings, is it sufficient to take off the plaster to discover their timber frame construction. What you see in the gateway is not smoke but a droplet of water on the lens of my camera, for we had April weather in July.

The Steuben monument too defied the rain. 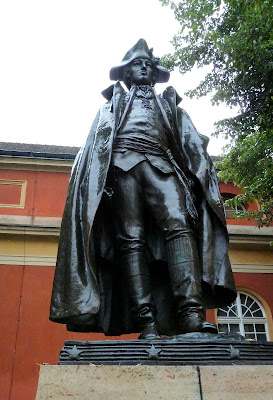 The statue once donated by the American Congress was lost during the war and re-cast. 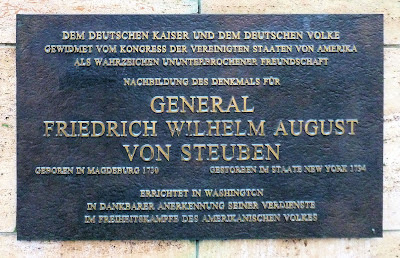 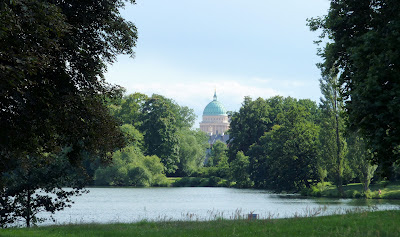 The many parks amid lakes and along the Havel river make Potsdam a pleasant place to live. Here you look along one of Potsdam's famous sightlines (Sichtachsen) from the Neuer Garten over the Heiliger See unto the dome of St. Nikolaikirche.


The Stadtschloss is the big building on the left-hand side, the bridge pointing to it. Located above on the other side of the square called Alter Markt is St. Nikolaikirche. 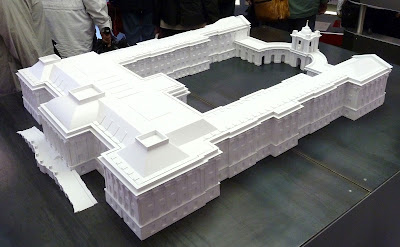 Re-building of the exterior of the Potsdam Stadtschloss in its original splendor is underway. The interior, however, will fulfill present needs. The Brandenburg state parliament now housed outside the city will move in.


In this particular case, the color code of German parties I presented earlier does not hold. Only the Green Party and the Free Democrats keep their colors while the seats of the Christian Democrats - there is no visible black light - are shown in a somewhat fitting clerical violet. A red-red coalition governs the state of Brandenburg; however, it is challenging to distinguish Social Democrats and the post-communist Die Linke for their color. Usually, in graphical presentations, Social Democrats keep their red with Die Linke being shown in amber. Here Die Linke is coming out somewhat pink while the Social Democrats have lost some of their traditionally red intermixing some liberal color for an unusual orange. 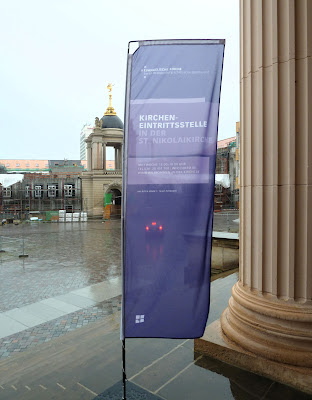 Under the communist regime in the GDR, Christianity declined to the extent that nowadays, the federal states in Germany's east are missionary territories. There is a Kircheneintrittsstelle (a long word for mission point) at St. Nikolaikirche. In the background, the building site of the Stadtschloss. 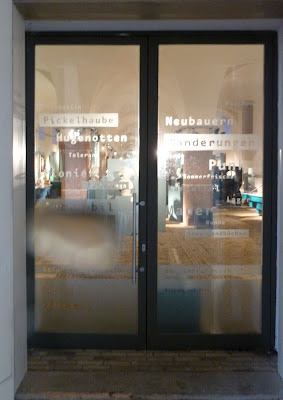 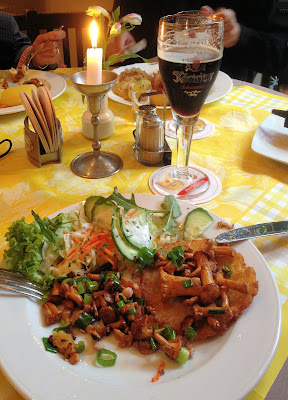 By the way, fried Pfifferlinge (my first chanterelles in 2012!) is one of my favorite dishes. I downed them, you guessed it, with Köstritzer Schwarzbier. 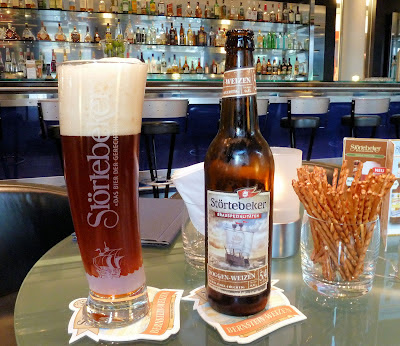 At the hotel bar, I ordered strange top-fermented wheat (Weizen) beer made from rye (Roggen). The brewery calls the beer Roggen-Weizen, which I found disturbing although the beer was excellent in its crooked glass.
Many regard Klaus Störtebeker as the German Robin Hood, who, together with his companions, the Victual Brothers (Viktualienbrüder) practiced piracy on the Baltic Sea and the estuary mouth of the Elbe River. Whether he really was the Likedeeler (lower German for dealing with everybody alike), always taking from the rich and giving it to the poor is nowadays difficult to say for he and his staff were beheaded in Hamburg back in 1401.

A modern castle called Cecilienhof built in 1917 for Crown Prince Wilhelm and his wife Cecilie and located in the park Neuer Garten (New Garden) served as the place where in 1945 the Big Three decided about Europe's future after World War II. 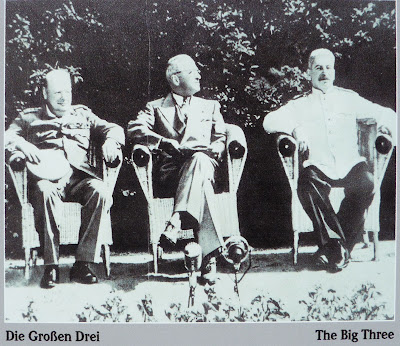 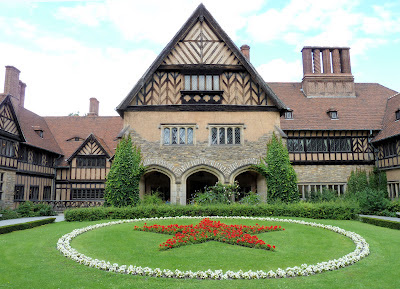 Honored by a red star in the courtyard of the building, it was Stalin who decided that Eastern Europe was to be dominated by communism extending the Soviet Union virtually over the Balkan states, Poland and the eastern part of Germany. Factually the Soviet Union annexed the Baltic states.

The other two leaders in Potsdam were weak: Harry Truman replacing the recently deceased Franklin D. Roosevelt, was not yet at ease on the international stage and bull-doggy Winston Churchill had to make way for Labour's Clement Attlee in the decisive phase of the Conference when his Conservatives lost the general election. 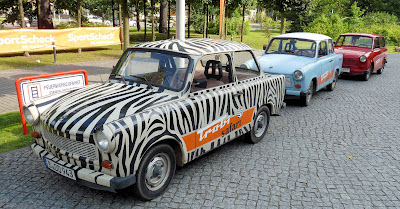 East German nostalgia. I counted three Trabis, officially called Trabant, in front of our hotel. The parked cars reminded me of a defeatist story told in the former GDR. Asking the question: What is one, two or three Trabants, the answer was: One Trabant is a socialist achievement, two Trabants are the solution to the problem of finding spare parts, three Trabants are the weekly car production of the Zwickau auto works. 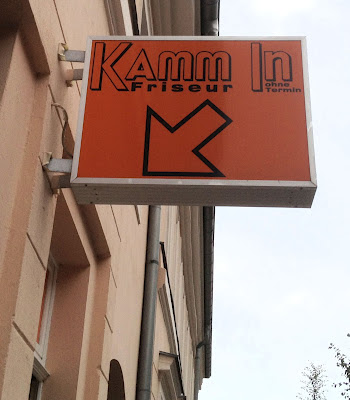 Here a sign of a hairdresser advertising his no-waiting services. I discovered it in Neuruppin, a garrison town, where King Frederick-Wilhelm had once banned young Frederick following his aborted escape from his father. The writing on the sign is - as we say in German and fitting the circumstance - drawn by the hair, i.e., far-fetched. You just Kamm* In ohne Termin to get your hair cut where Kamm in German unfunnily means comb.
*pronounced come in German
Eingestellt von Red Baron um 15:56