St. Martin on the Gate

Another querelle d'Allemand is cooking up this time in Freiburg. Controversy about a picture at St. Martin's gate (Martinstor) looms on the horizon.

Again a tiny historical review is necessary to appreciate what is at stake. The Porta Sancti Martini is Freiburg's oldest and most picturesque gate. It was first mentioned in 1238 in a document, although the building is much older. 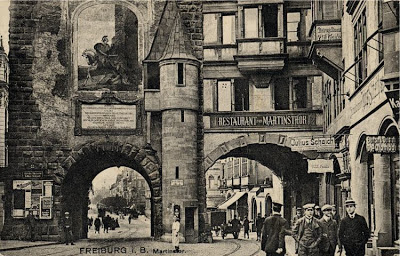 The postcard shows the gate in 1905, where on the inner side in 1851, Wilhelm Dürr the older painted the famous scene with the Roman soldier Martin cutting his cloak and handing one half to a naked beggar. 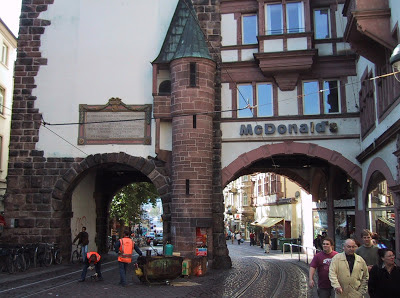 The above photo I shot in 2004. Two changes are clearly visible: the Restaurant Zum Martinsthor became a McDonald's fast food, and Dürr's painting on the gate disappeared. It had become necessary to take it off in 1968 when pieces of the degraded picture started to fall onto pedestrians. The face was plastered white and had been without decoration since then.

From last Friday's Badische Zeitung, we citizens learned that a new painting shall decorate the Martinstor that actually is a rather old one. Simon Göser painted St. Martin's scene around 1790, and his oeuvre is presently stored at Freiburg's central art depot. Red Baron dislikes Martin's rose-colored cloak and prefers a more modern approach to the main message, "For I was naked, and ye clothed me" (Matthew 25,36).
Are we already fixed when Freiburg's finance minister - although he will not contribute one cent to an operation that should be privately sponsored - stated, "Either Göser's picture or a white surface?"
Will modern painters get a chance? It will be interesting to see how they will attack the old story fulfilling at the same time the condition of Freiburg's head of Cityscape, "Any child looking at the picture will recognize, "This is St. Martin and the beggar."
The BZ already published a photo on the Internet where Göser's painting is virtually mounted at the gate.
*
Eingestellt von Red Baron um 17:29