Fake news has become a German word. Our Zeitungsente (newspaper hoax) is just wrong news, sometimes with a funny touch, while fake news has the connotation of being made up deliberately. Fake news is what in German would be called quite clumsily a vorsätzliche Falschmeldung. The shorter word Lügenpresse (lying press) is burdened with a Nazi past, so the American term fake news came in handy and has been adopted.

Local newspapers in Germany’s southwest have started a campaign with the strange slogan “Jedes Wort wert” meaning and translated “My newspaper is worth every word”. Strange indeed, for German readers generally have confidence in black-on-white print media along the lines of the statement of Faust’s famulus in Goethe’s theater play:


Fake news pollutes the political climate, and so many a man accuses the media as the source of all evil. Long-gone civilizations killed the messenger bearing bad news. Would a silencing of the sources be a remedy against fake news? Was there not a statement regarding the revoking of TV licenses?

Visiting the former GDR (German Democratic Republic) as a student, Red Baron experienced the making up of “facts” by communist trade union officials during a political discussion. Suddenly I found myself in a situation producing fake news. too. There is no excuse, but as a young man helpless as a kitten on the roof, I tried to beat my adversaries with their own weapons. 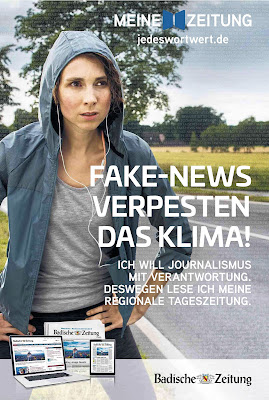 It is honorable that my local newspaper claims it is worth every word. Although I spend some time after breakfast reading the Badische Zeitung, the significance of its printed information* is quite variable for me. Browsing the NYT and Der Spiegel on-line makes printed national and international news in the BZ generally outdated. So I start with the arts and culture section followed by local news, although reports on traffic accidents do not interest me since they are interchangeable.
*My subscription includes the electronic version too. So when away from home I am informed about what is going on at home.

While fake news in the German press has rarely been no issue up to now, our media are instead accused of manipulating the news. Well, this is not news; haven’t media always done this? Their biased reporting is said in particular to have strengthened the new right-wing AfD* in the run-up to our recent general election. By spreading the story that members of the party were treated badly, the media were pushing them into the role of victims. Fact is that by their provocative right-wing statements and actions, members of the AfD deliberately place themselves into the role of martyrs seeking the pity bonus. Dealing with the AfD is a no-win situation, for ignoring them will make them pitiably, attacking them politically will lead to endless debates and to situations similar to what I experienced in the GDR.
*Alternative for Germany

The first showdown with the AfD at our newly elected Bundestag ended in a stalemate. Each parliamentary group, i.e., party represented in the federal parliament, has the right to propose a speaker of the house who will be deputy to the speaker proposed by the party with most seats. The "main" speaker, second in line to our federal president, is generally endorsed by most of the other members of parliament.

At the opening session of the new Bundestag, most deputies of the other parties refused the accreditation of the AfD’s candidate for deputy speaker in three consecutive ballots, pushing the guy into the role of martyr. His stigma? He had violated the Article 4 of our constitution (Grundgesetz) about religious freedom by denying people the right to practice their Muslim faith in Germany. Sadly, this is not fake news.