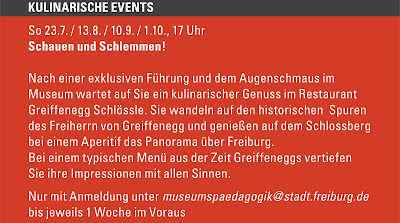 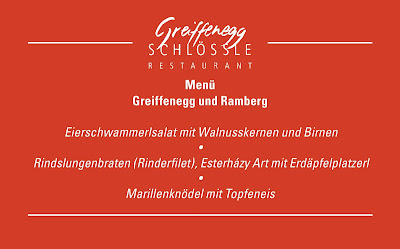 When Red Baron read the above announcements he was all excited. Marillenknödel are not simply apricot dumplings. I had them once made in Geneva 25 years ago by an Austrian lady as the main course and still remember the taste of this juicy delight (Marcel Proust sends his regards). Already the name Marillenknödel sounds the k. and k. Monarchy (Austro-Hungarian Empire) for Marillen harvested in Austria are quite different from Aprikosen picked in Germany.

Afraid of being late with my inscription to the event I immediately choose October 1, as my date, but soon felt frustrated being informed that due to the lack of participants my date had to be advanced. When I went to the Augustinermuseum to buy my voucher I was told that in order to achieve a quorum of six participants they had finally moved me back to square one, i.e., October 1.

When at 5 p.m. the museum closed our group of only five started the scheduled guided tour of the exhibition Greiffenegg und Ramberg. Having already seen the exhibition twice I was the only person not having regrets when exactly at 5.15 p.m. all the lights went off in the exhibition hall. Following a long wait, the lighting could only be partly reestablished. While you can admire the graphic highlights in my earlier blog our guide had to use the light of his smartphone illuminating for us the most interesting drawings.

Later we walked up to the Greiffenegg-Schlössle and read on a sign that the restaurant was closed. However, when we opened the door we were well received being the only guests of the evening.

As an aperitif, the house offered the, on the occasion of the exhibition newly created, Ramberg drink with gin, tonic water, and peppermint leaves. However, our charming service lady soon came back and announced that tonic water was off.  Instead of Ramberg, the chef had prepared a drink baptized Greiffenegg based on Gewürztraminer wine on the rocks plus peppermint leaves. Here again, I had no regrets having tasted the Ramberg drink on another occasion. Both drinks need getting used to.

For the k. and k. three-course dinner I wanted to order an Austrian wine but in its absence, I finally opted for a white Burgundy from the vineyards on Freiburg's Schlossberg we were looking at while dining.

The first course was so excellent that we asked ourselves whether there would be any further escalation.

And there was. Red Baron had the best fillet of beef since years and could have used the double quantity of an incredible sauce.

I was overwhelmed and thinking: Why are only so few of my countrymen/women embracing the idea of a combined cultural-gastronomical event? The Greiffenegg-Ramberg exhibition comes to a close today but will be followed by one devoted to Rembrandt's graphics. Will the Augustinermuseum give the idea of a combined event another try?

Came in the Marillenknödel. I was in such a high mood that I forgot to take a photo of the dish. It was a nice dessert but did regrettably not revive my souvenir. At the end, chef and service united at our table and we were all praise. What a memorable afternoon and evening!