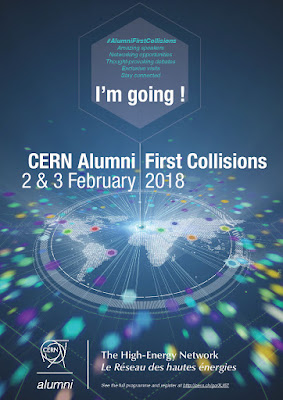 Red Baron is an alumnus now. I reached the status last weekend not at the University of Munich from which I graduated, but at CERN, where I spent 32 years of my professional life until my retirement. I participated in the jamboree called First Collisions organized at the CERN site. So it was quite natural that, when I arrived, the first place to visit was my former office. 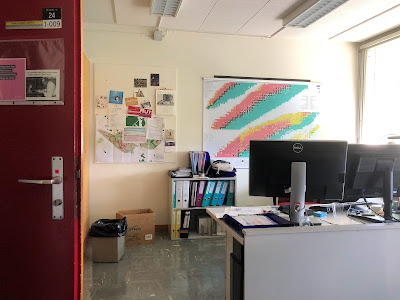 The isotope chart behind the desk was still there as well as the pinboard. Instead of the one clumsy tube monitor I had, now two (!) flat screens are on the desktop. I also noticed that my small wooden bookshelf behind my (chair where I kept my reference books is still in use.

Later I met my last Division Leader from Austria and three of my former collaborators from Germany, Italy, and France all smiling. With all the others long-retired Belgians, British, Danish, Dutch, Norwegians, Swedish, Swiss, and one of the first physicists from Slovakia (not retired) I recruited at CERN, my group was truly European not forgetting those many visiting colleagues from China, Japan, Russia, and the United States. 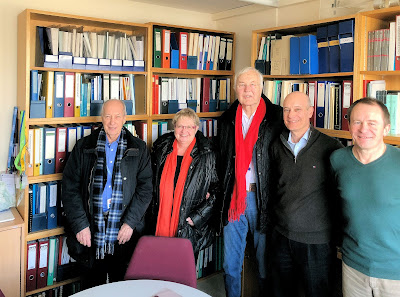 I hurried to the Main Auditorium and arrived just in time to listen to CERN’s Director-General Fabiola Gianotti welcoming the assembled alumni. She started with a slide showing the Large Hadron Collider and the location of the four experiments situated underground in the Canton of Geneva and the Pays de Gex of France. Note the snow-covered Alps beyond Lake Geneva in the background. 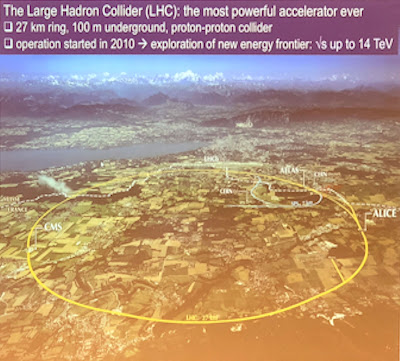 The age structure at CERN presented by the DG really astonished me for I was retired, i.e., had to leave at the age of 65. Today the official age of retirement is 67. So it was comforting for me to see that beyond the age of 82, the professional life at CERN finally seems to come to an end. 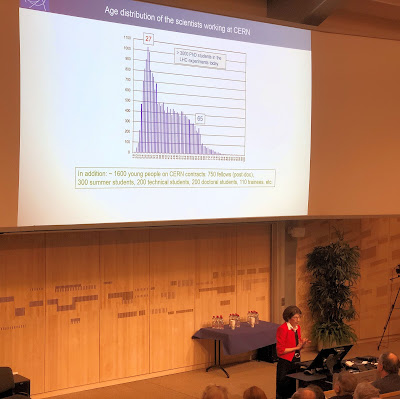 Back to high energy particle physics. 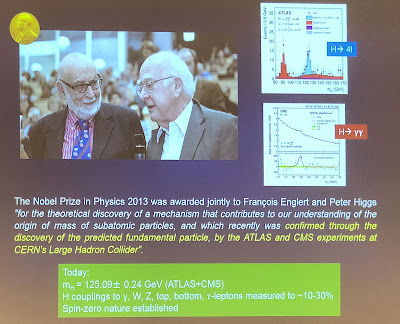 The lab still lives on the discovery of the Higgs boson with its mass now precisely determined at 125 GeV plus-minus a quarter of a GeV, but many questions still remain unanswered in physics, and some problems need to be solved. Why is there more matter than antimatter in the universe, and how did the plasma look like in the time slot before 10 µsec after the Big Bang? 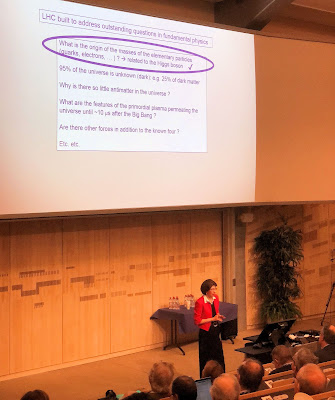 To investigate those questions further, particle physicists ask for more powerful accelerators. The quest for higher particle energies is on leading to new R&D (research and development) at CERN. 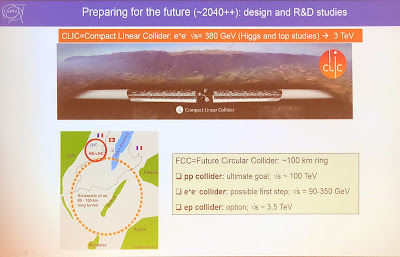 Note the plans for a Compact Linear Collider to be located in the Pays de Gex? But above all for the Future Circular Collider that should fit into the given landscape. Why? The official reason is that the LHC will serve as an injector to the FCC, or is it r the region around the Lake, between the Jura Mountains and the Alps being so beautiful and attractive?

The DG showed her last slide: 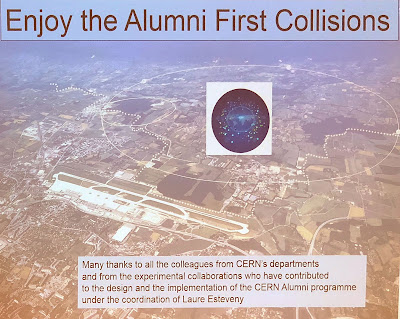 And thanks to the CERN management for sponsoring the successful event, the first one of its kind and likely to be followed by others.

The activity during the weekend was so dense; there is more to report. Stay tuned in particular for some nostalgic notes (what else?) in a future blog.
Eingestellt von Red Baron um 16:55