of the Steuben-Schurz-Gesellschaft (SSG) goes to the Freiburg-Madison-Gesellschaft. We are greatly honored and will continue in our efforts to promote and strengthen the ties between Freiburg and our sister city Madison, WI. 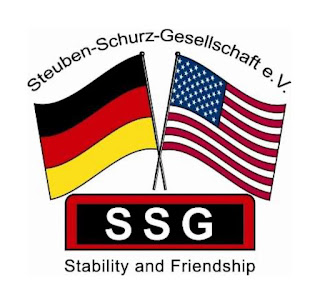 In October 2019, the FMG received an invitation to participate in a competition for the most outstanding partnership of a German city with one in the States.

In December our President Toni Schlegel received a letter with the message that the FMG had not only been elected as being the award winner but that the vote was unanimous, too.

The objectives of the Steuben-Schurz-Society in Frankfurt are the promotion of German-American relations and international understanding. Its motto is "Providing stability and friendship in a challenging environment." Founded in 1930, dissolved in 1933 by the Nazis, the SSG was re-founded after the war on 1 August 1948.

The two Germans who lent their names to the SSG achieved high recognition in the United States. Friedrich Wilhelm von Steuben fought on George Washington's side in the War of Independence. He was appointed Inspector General of the United States Army.

Carl Schurz, on the other hand, fought with Abraham Lincoln against slavery. As Secretary of the Interior in the administration of President Hayes, he directed the fight against corruption and fought for the rights of Native Americans. Margaret Schurz, the wife of Carl Schurz, founded America's first kindergarten in the state of Wisconsin, which is now the partner state of Hesse.

Read more about SSG's history on its website. Strangely enough, the SSG does not have a Wikipedia entry.

The award ceremony is scheduled at Frankfurt's Hotel Maritim on January 28, in the framework of the New Year's reception of the SSG. Red Baron will report.
Eingestellt von Red Baron um 21:34