Many of my friends know that I spent eight years of my secondary education in Hamburg. Therefore I long to visit the city whenever possible. In fact, my former class holds reunions annually, so I am in Hamburg at least once a year. Since remembering dates becomes hard with age, those who are still alive now always meet on the third weekend in September. Here is the link to picture galleries of those class reunions dating from 2002 to 2019. 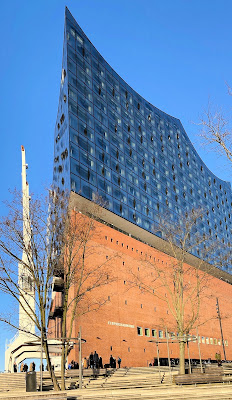 In January 2017, I was in Hamburg to listen to a concert at the Elbphilharmonie (Elphi). This new landmark had been inaugurated just the week before. The resulting trilogy of blogs further described some Hamburg highlights and concentrated on the famous Miniatur Wunderland.

Last year I was in Hamburg for my class reunion in September, then in November, and later I celebrated the turn of the year on a boat on the Elbe River.

My visit in November had a double purpose. 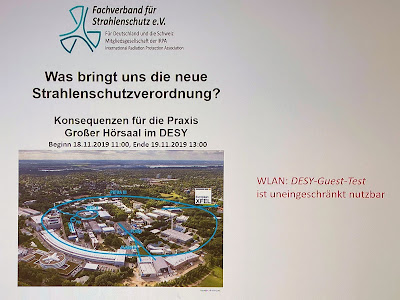 The Fachverband für Strahlenschutz (FFS), the German-Swiss Radiation Protection Society, offered a two-day seminar on the new German Radiation Protection Act at DESY (Deutsches Elektronensynchrotron), the high-energy physics laboratory located within the city of Hamburg. Retired members of der Fachverband paid a well-reduced conference fee, including a guided tour of DESY. That made me curious to learn about new developments in my old trade.

The other reason for my trip was to find out whether the visitors' tour of DESY would be worth an excursion to Hamburg in 2020 in the framework of the "Museumsreisen." You may know that Red Baron is a member of Freiburg's oldest citizen society of 1807 called Museumsgesellschaft. Last year our society visited the city of Schwäbisch Hall and its surroundings. I published some of my stray observations during that trip in a blog as splinters.

On November 17, Red Baron boarded the ICE train from Freiburg to Hamburg. The ride took six and a half hours, but I like soft traveling, although I no longer enjoy Butterkuchen (with time ”the quality of the cake was strained”) but rather a pot of coffee served on the train with a slightly salty and crusty Laugen croissant bought at Freiburg's train station. 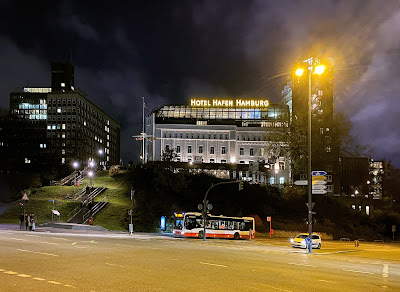 I stayed at the Hotel Harbor Hamburg located near the S-Bahn station Landungsbrücken (jetty facilities).

I had a splendid view of the port and the Elbe river from my hotel. 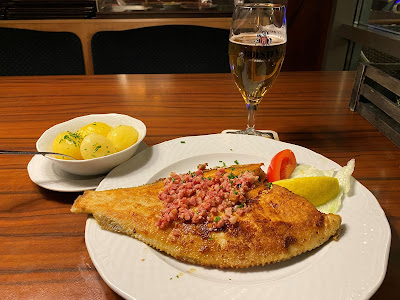 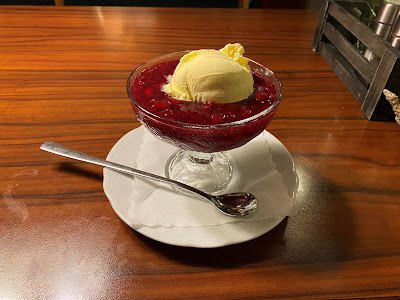 On the waterfront at Landungsbrücken in the evening, I had one of the best Finkenwerder Speckscholle (a plaice baked in finely diced bacon) in my life crowned by a Hamburger Rote Grütt (red berry groats with vanilla ice cream instead of the original vanilla custard).

The hotel had a tower with a bar offering fantastic views over the city and harbor.

Having been out of business for nineteen years, what did I learn at the seminar on radiation protection? Since the annual dose limit to the body of persons exposed to ionizing radiation in exercising their profession had been lowered from 50 to 20 mSv twenty years ago, radiation protection had lost the notion of critical organs that had to be specially protected. 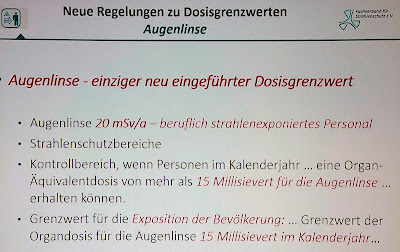 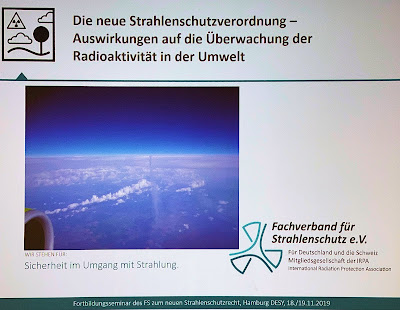 This is not true for flying personnel for they are exposed to penetrating high-energy radiation during flights. Their individual doses are not measured but calculated and attributed according to the route flown. Nowadays, pilots and cabin crews are among the most exposed people. 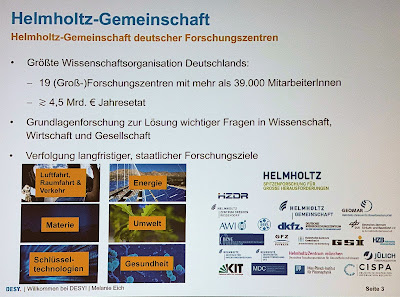 In the introduction of and before the guided tour of DESY, I learned that the institute is now part of the Helmholtz Community of German research institutes.

The HERA tunnel and accelerator (in orange) run deep below the city of Hamburg and cross under the famous Volkspark soccer stadium, home of the frustrating HSV (Hamburger Sportverein).

DESY's newest tool is the European XFEL (X-Ray Free-Electron Laser Facility)
commissioned during 2017. The machine is constructed such that the electrons produce X-ray light in synchronization, resulting in high-intensity X-ray pulses with the properties of laser light and at intensities much brighter than those produced by conventional synchrotron light sources (Wikipedia).

The Standard Model of particle physics is elegant, but physicists look further. Even at the highest energies at CERN, there is yet no sign of a New Physics. So frustration becomes more pronounced as the years pass by. Here is a glimpse of hope, a possible crack in the Standard Model:

The latest LHCb result is the first test of lepton universality made using the decays of beauty baryons – three-quark particles containing at least one beauty quark. Sifting through proton-proton collision data at energies of 7, 8 and 13 TeV, the LHCb researchers identified beauty baryons called Λb0 and counted how often they decayed to a proton, a charged kaon and either a muon and antimuon or an electron and antielectron.

The team obtained a ratio slightly below 1 with a statistical significance of about 1 standard deviation, well below the 5 standard deviations needed to claim a real difference in the decay rates. The researchers say that the result points in the same direction as other results, which have observed hints that decays to a muon–antimuon pair occur less often than those to an electron–antielectron pair, but they also stress that much more data is needed to tell whether this oddity in the behaviour of leptons is here to stay or not. 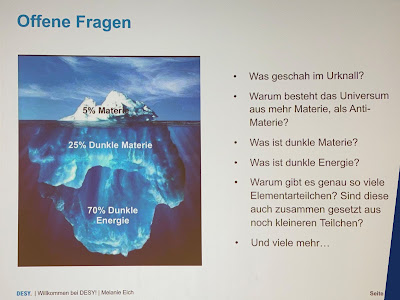 There are still many open questions in physics, in particular about dark matter and energy. And here is a wanted poster with fancy "names" as an illustration of what we still do not but would like to know. 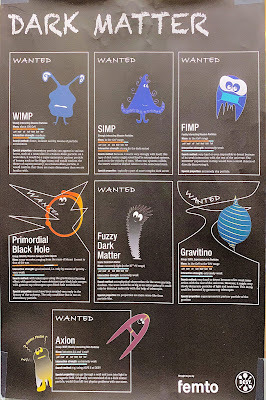 DESY can no longer fly on the one wing of high-energy physics. In the coming years, the Federal Republic and the Hamburg Senate will transform the DESY complex into a multidisciplinary Science City hoping for synergetic effects.


The taste of Hamburg or Franzbrötchen are just delicious.

Looking for food in Hamburg to be taken on the train is straightforward. The underdeveloped culture of Laugen croissant in Germany's north is quickly forgotten when you opt for Franzbrötchen, a small, sweet pastry, baked with butter and cinnamon.


The name of the pastry dates back to the French occupation when in 1812, Hamburg belonged to France, to Napoleon's Grand Empire. Already at that time, the French occupiers ate better than the Germans. Instead of the petits pains, the former preferred the sugared version that the people from Hamburg reverently called französische Brötchen. Name and recipe stuck.
Eingestellt von Red Baron um 21:48