It’s Not Over Yet

… was the warning statement of RKI’s* vice president, Professor Schaade, during a press conference ten days ago. In Germany, at that time, the mean reproduction rate R for Covid-19 cases had climbed to 1 (actually 0.96), but Schaade’s statement is still valid even with an R now down to 0.78.
*Robert Koch Institute


On Monday, we will see a few more openings on our way to a “new normal” life. The most important ones for parents and their kids are access to playgrounds as well as zoos and museums. More important for many people and for me is a visit to the hairdresser scheduled for May 5.

The number of daily infections in Germany is slowly decreasing. Still, authorities are afraid of the so-called second wave, so the next round of discussions between the federal government and the state governors about more openings is not going to be held until May 8. 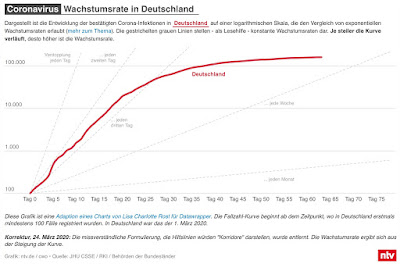 Germany is actually not too bad when you look at the nearly perfect flattening of the frequently cited curve.

From a graphic that I found on a Swiss web site, it is evident that three countries are still on the rising slope of infections, the United Kingdom, Sweden, and the United States.

A low reproduction rate means that infections in a population are on the decline. In an RKI press conference last Thursday, reporters tried to use the then current number of 0.76 to argue that social and economic openings should come faster. Robert Koch Institute is the wrong address, for these decisions are political. 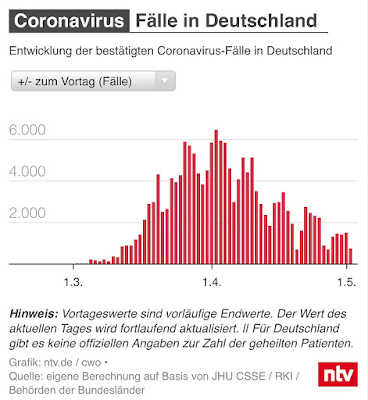 Then Professor Wieler brought into the discussion the other important parameter: the number of new Covid-19 cases. This must be small, too, so that chains of infection may be followed, and affected persons are quarantined.

With all this said, the discussion shifted to the calculation method for R. When the debate heated up again, Professor Wieler proposed a special seminar at the RKI for journalists about “How to calculate the reproduction rate.”


Like Hydroxychloroquine, another wonder drug is now lifting the spirits of those looking for a remedy for Covid-19. In in vitro experiments, Remdesivir makes growing chains of the viral RNA terminate prematurely, killing the virus.

The New York Times continues, “A clinical trial, sponsored by the National Institute of Allergy and Infectious Diseases, including more than 1,000 severely ill hospitalized patients showed that those receiving Remdesivir recovered faster than those who got a placebo: in 11 days, versus 15 days. But the drug did not significantly reduce fatality rates.“ It seems that if Remdesivir is given to patients being already in a critical state, the death rate does not change.

This news was touted on German television, too, so I fear that like Hydroxychloroquine, Remdesivir will again create false hopes in people.


Excess mortality from Covid-19 is something many people still deny, claiming that Corona is nothing else then another flu. The graphic shows the excess mortality during the present pandemic for England and Wales.

And here is a table where indeed in countries like Germany and Denmark the excess mortality would so far only show as a small ripple on the normal curve.


The whole world is looking to Sweden, where apparently public and economic life is normal with only a few restrictions. However, ultimately, Sweden is following the same approach as the other countries: to keep the number of people infected with corona so low that the health system does not collapse.

The government of the Scandinavian country is relying consistently on the common sense of the population: "We believe we can achieve just as much with voluntary action as other countries with restrictions," said Anders Tegnell, Sweden's chief state epidemiologist.

From the outset, Sweden was quite prepared to make full use of the health system in contrast to Germany, although the Swedish government tries not to let more people fall ill than the country's medical system can handle. Sweden's health experts hope that thanks to their strategy, a sufficient number of people will have survived the infection in the fall to avoid the “second wave.”

The table shows the price the Swedes have paid so far in comparison to their Scandinavian neighbors. Nevertheless, a change is not in sight. When Tegnell was asked whether he was satisfied with his strategy, he said. "Yes! We know that Covid-19 is very dangerous for very old people, which is, of course, bad, but when you look at pandemics, there are much worse scenarios than this one."


For Europeans, the distinction between those three forms of society is evident. There are communist countries, some are doing quite well while others are hell for the people to live in.

State Socialism is practiced in certain countries in South and Central America, frequently not in its best form.

Social democracy is deeply rooted in many European countries where social democrats form or participate in many "capitalist" governments. 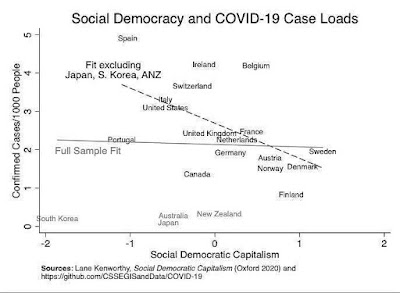 Here is a graphic showing the number of confirmed Coronavirus cases versus the degree of social-democratic capitalism in a country. Also, here Denmark is somewhat better than Sweden, but a touch of socialism may not be too bad after all.


… or the level of endemic infection, as we have all learned, should be around 70% to reach the famous herd immunity. Again and again, the Swedish model is cited as an example of an effort to arrive at a level of infections where most of the population will be immune against SARS-CoV-2.

Anders Tegnell estimates that 25% of the people in the Stockholm area are already immune. The first scientific investigation in Germany’s administrative district of Heinsberg, a hotspot of Covid-19, gave a value of only 15%. At the same time, Professor Wieler estimates that the percentage of infected people in Germany overall is actually only about one.

With the present approach of most countries, namely, to reduce the number of infections by hygienic measures (distancing, etc.), the world will need years before herd immunity would be reached.

On the other hand, up to half a million deaths from Covid-19 are projected for Germany on the way to a rapid Durchseuchung without any protective measures.

When one reporter continued harping on herd immunity, Professor Wheeler became angry, ”I don't wish anybody to be infected with this insidious virus, I don't wish it for myself, nor for my family,” and he wasn't even referring to late damage people might suffer following the apparent recovery from infection with SARS-CoV-2.

Concerning the late damage, our knowledge is still fragmentary. While some people recover rapidly and apparently lead a healthy life afterward, others need a long time to recover and possibly will never reach the quality of life they had before the infection.


The Dignity of the Human Being Is Inviolable


The speaker of the German Bundestag, Wolfgang Schäuble, fully defends the government's measures concerning the containment of the Coronavirus. However, he raised a caveat, "When I hear that everything must take second place to the protection of life, then I have to say: that's not correct in this absolute form, because fundamental rights restrict each other. If there is one absolute value in our constitution at all, then it is the dignity of the human being. That is inviolable. But it does not exclude the possibility of our death.”