A Corona blog eight weeks in a row? Isn't that too much? Let my readers be my judges.


The Situation in Germany

Last Wednesday, Angela Merkel held a teleconference with Germany's governors discussing further openings given the observed decrease in the number of Corona infections. While the incidence per 100,000 inhabitants ranges from 335 in Bavaria to only 44 in Mecklenburg-Western Pomerania, the governors would like to open social activities in their Länder (states) and within their authority with different speeds according to disease incidence.

Long live federalism, but if something goes "Corona" in one state, now its Landeschef (governor) is to blame.

"We can say today that the first phase of the pandemic is behind us," the chancellor said, but she iterated, "We have to be aware that we are still at the beginning of the pandemic and that we will have to deal with this virus for a long time.” And she added, "The new openings are a bold step."

While Merkel would have liked to march in step with Germany's governors, there now is a defined framework within which the states agreed to proceed with their opening strategies.

This was agreed upon: While observing strict hygienic rules, all shops are allowed to open. Sports, training, and recreational sports in the open air without physical contact may resume. However, the approval of huge events should wait. This means that public festivals, major spectator sporting events, village and street festivals, concerts, and marksmen's fairs, as well as funfairs, will remain prohibited. In particular, the Bundesliga (professional soccer) will play in empty stadiums, i.e., so-called ghost matches without their fans. This will remain so until at least until August 31.

Daycare centers and public schools, which operate under the authority of the states, to begin with, will open hesitantly. They will operate with small groups and possibly even not fully open after the summer holidays. Too little is known about children as Corona carriers and transmitters, and then there are these disturbing reports about serious and strange illnesses in kids infected with SARS-CoV-2.

All children now in homeschooling will see a classroom before the summer holidays. Daycare centers will start taking children next week, focusing on families most in need. Residents in nursing and care homes can receive visits from one defined person only.


Finally, the chancellor and the governors agreed on an emergency brake. Should the rate of infections in a district or district-free city increase above an Obergrenze (upper limit) of 50 new infections per 100,000 inhabitants averaged over seven days, restrictive measures will be reinstated, or even local lockdowns imposed.

"If something happens locally, we won't wait until it has spread through the whole republic, but we will act locally," Merkel said. 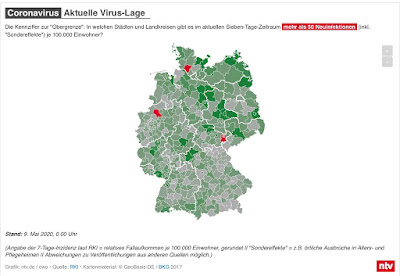 This built-in emergency brake of 50 had to be pulled in three regions before the weekend: The number of new infections surpassed critical levels in the district of Greiz in eastern Thuringia (74.4), the district of Coesfeld in North Rhine-Westphalia (76.4), and the district of Steinburg in Schleswig-Holstein (62.4). 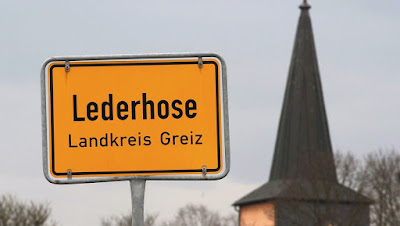 The first mention of the village Lederhose in the Greiz district is found in a Latin document of October 18, 1287, but the settlement of Slavic origin is older. The name has nothing to do with leather pants but has its origin in the Slavic name Ludorad. Ludoraz is the place where Ludorad dwelt.

All recent Covid-19 outbreaks are confined within their districts. In the first case, it is a nursing home (again!), while the two others are Fleischfabriken (meat packing plants) that were promptly closed. The Bulgarian and Rumanian workers are under quarantine.

According to Green Party whip, the Bavarian Anton Hofreiter (Court Rider), "The increased incidence of Corona infections among slaughterhouse employees in North Rhine-Westphalia is a clear indication of the abuses in this industry." He continued grumbling, "Corona reveals the untenable conditions in some slaughterhouses. Even before the crisis, it was known how bad hygiene is in many companies. This is also due to the deplorable housing and working conditions - from poor equipment to exploitative working hours."


Waiting for the Second Wave


In the press conference of the Robert Koch Institute last Thursday, Professor Schaade warned, "A second wave is expected. Although the situation in Germany is presently under control with falling incidence rates of Covid-19, we cannot exclude a new spread brought in, e.g., from outside. We must remain vigilant."

However, the test capacity in Germany has now reached 964,000 in a week, of which only 317,000 tests were used last week, with just 3.8% being positive. Besides, there is no national shortage of ICU beds.

We also may hope that the much-feared second wave will be less devastating because doctors have learned how to treat Corvid-19 patients.


There Is No Glory in Prevention


An anti-vaxxer (Impfgegner) is protesting with other people in a strange alliance. Those few right- or left-wingers, constitution defenders, freedom fighters, 5G opponents, and crackpots had no problem keeping their distance in front of Freiburg's townhall. The anti-vaxxer's message was poorly presented. The man will be charged for showing a Nazi symbol.

The opponents of the extended lockdown argue, "It is about to ruin our social, cultural, and economic life, so we must get off it as quickly as possible. Covid-19 is no more dangerous to the population than influenza if certain risk groups and people over 65 years of age are specifically protected against infection."

This comparison is deceptive, for contrary to the Coronavirus, there is a basic immunity to influenza in the world population. While a new pandemic like the Spanish flu is extremely unlikely, we still know next to nothing about the new Coronavirus.

The opponents continue, "Elderly, sick, and otherwise high-risk people must wear special masks and observe distance rules, as must geriatric nurses and hospital staff. All others must practice 'Smart Distancing': Simple masks, distance in public transport, and when shopping."


It is becoming apparent that the transmission of SARS-CoV-2 requires a virus load as presented by billowing aerosols in enclosed premises during long carnival sessions, in singing beer halls, and in poorly ventilated polling stations (wasn't it cold in Wisconsin on election day?).

The Heinsberg investigation clearly shows that people with severe symptoms of Covid-19 had been sitting particularly close together with loud talking and singing, thus throwing many droplets into the air through which the virus is transmitted.


Lufthansa Too Big to Fail?


While passenger traffic on U.S. airlines is down 95 percent compared to the same period last year, it is down to less than 1% for Germany's airline Lufthansa.

The difference is explained by the fact that in the States, the bulk of air traffic is domestic while Lufthansa was making money with its world-wide connections.


Shaken by the pandemic, the airline grounded 700 aircraft of its 763-plane fleet and parked many of them on the no longer needed third runway at Frankfurt's International Airport.

Instead of kerosene Lufthansa now burns about one million euros per hour. The proud German crane is mothballed.

The future of Lufthansa oscillates between bankruptcy and bailout by the government using taxpayers' money. The airline's new flotilla needs downsizing, but who around the globe will buy even well-maintained planes?


Kreuzfahrten have become extremely popular in Germany in recent years. They exude international flair via "alcohol-impregnated" people of numerous nationalities mingling on their way to exotic places.

It turned out that cruises were the ideal breeding grounds for spatially contained Corona outbreaks. Ships were desperately trying to reach any port to land their passengers. Who would like to live through such a nightmare again?

Here is the translation of a paragraph of the daily blog Elbvertiefung by the weekly Die Zeit: "How the cruise industry is doing in Corona times can be studied looking at water faucets. There are thousands of faucets installed on every ship: in cabins, in kitchens, in sports clubs. There are more than 400 cruise ships all over the world, most of them now bob up and down without guests, resulting in more than one million unused faucets. Like the ships, the faucets are built to be always used; otherwise, legionella bacteria may thrive in the pipes. That is why workers now have to turn the faucets on and off. Ship after ship. Cabin by cabin. Week after week. Until Corona is over. Until the borders open again. Until guests are allowed on board again. Until things go back to the way they were when the cruise boom seemed like a fairy tale."

While the famous Meyer shipyard in Papenburg "fears" that no more cruise ships will be ordered for a very long time, the Flensburg-based shipbuilder FSG has filed for insolvency.


is not a quarrel but a scientific disputation frequently misinterpreted by laypersons, "This morning Professor X said this, but in the afternoon, Professor Y told us that." This only means research on Corona is in progress, and the statement "We don't know" would frequently be appropriate in the discussions between experts.

Currently, public criticism is growing against scientists. People demand clear recommendations from them, even though many research projects on the Coronavirus are far from complete.

If the experts correct their opinion because new studies lead to further knowledge, people don't understand and freak out, "None of the virologists have a clue!" Even the mood of reasonable people will shift from rational to emotional.


The plague was a permanent guest in Europe - in Italy as recently as 1945 - becoming "virulent" at times.

Wikipedia states, "The Black Death most likely originated in Central Asia or East Asia, from where it traveled along the Silk Road, reaching Crimea by 1347. From there, it was most likely carried by fleas living on the black rats that traveled on Genoese merchant ships ...".


Doctors attributed the Black Death to bad vapors and protected themselves accordingly. Nowadays, we know that Yersinia pestis is a bacterium transmitted to man/woman by carrier fleas.


The Münsterbauverein published the picture of a medieval gargoyle at the Minster church wearing a Mundabdeckung (mouth cover) only. Such half-protection frequently seen in Freiburg's streets was useless then due to the infection path of the plague. It is useless now, too, for the SARS-CoV-2 virus predominantly settles in the nasal mucosa. 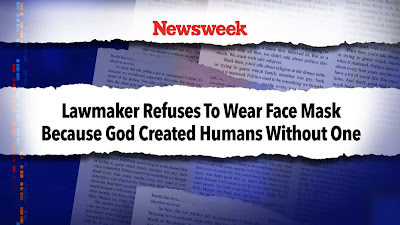 Although people of the Middle Ages were more religious than the enlightened citizens of the 21st century, they did not invoke God to be exempted from wearing a mask.

On the lighter side. Here is my haircut on Tuesday. Do you see any difference? 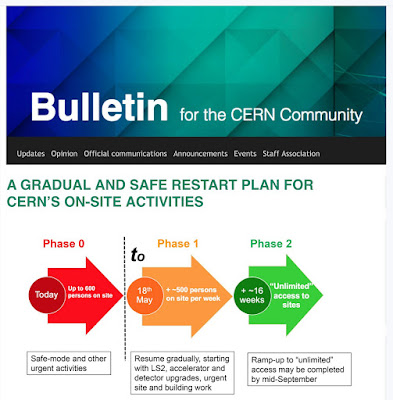 I am happy to see my former employer is resuming work, as illustrated by a traffic light. 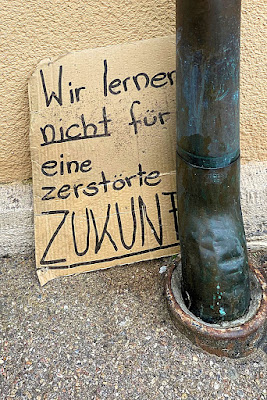 Behind a rainwater downspout, there is a forgotten cardboard sign with a cryptic message written by young people, "We do not learn for a ruined future."

Are they addressing the Corona pandemic or the changing climate? Do they learn at all in homeschooling?
Eingestellt von Red Baron um 20:45