”Der Mohr hat seine Schuldigkeit getan, Der Mohr kann gehen” has become a German dictum. As many well known sayings it was Schiller who wrote the lines in his drama Die Verschwörung des Fiesco zu Genua (Fiesco's Conspiracy at Genoa) in 1782.
Originally the Moors (Mauren) were the Muslim inhabitants of the Maghreb, the Iberian Peninsula, Sicily, and Malta during the Middle Ages. In German up to modern times, the English form, written Mohr and pronounced somewhat like more, was used for people of dark skin, and not so much the N-word.

Schiller's statement, "The moor has done his duty the moor can go," only has a subtle racist touch. It frequently happens in life that when a person has done his/her job - in case of Fiesco's moor a contract killing - he/she is no longer needed. He/she may not only leave but is not thanked, sometimes degraded, or even fired. This is why this citation from a rarely played drama remains popular in Germany.

The racist attitude is different in Heinrich Hoffmann's famous cartoon of 1844 "Der Struwwelpeter."  The psychiatrist dramatically denounces racism in "The Story of the Black Boys."

When three white boys tease a dark-skinned boy, Saint Nicholas becomes upset. Here is Mark Twain's translation:
He call'd out in an angry tone,
"Boys, leave the black-a-moor alone!
For if he tries with all his might,
He cannot change from black to white."

To teach those three "racists" a lesson, Saint Nicholas catches them ...

And they may scream, and kick, and call,
But into the ink he dips them all;
Into the inkstand, one, two, three,
Till they are black, as black can be.


In Berlin in 1707, a new street was named as the Lutheran pastor Joachim Ernst Berger wrote in his history of then-new suburb Friedrichstadt: "A Eodem [1707] im Ausgang besagten Monaths [May], bekahmen die Gaßen, dem publico zum besten, ihre Nahmen." (In 1707, at the end of the aforementioned month [May], the streets were named for the benefit of the people.) The 5th street name listed is "Mohrenstraße".
During the recent violent antiracist demonstrations in the States, ripples of the mighty wave reached the shores of the Wannsee* and were heard in nearby Berlin.
*Where in a villa in 1943 high Nazi officials in a conference decided on the Endlösung. 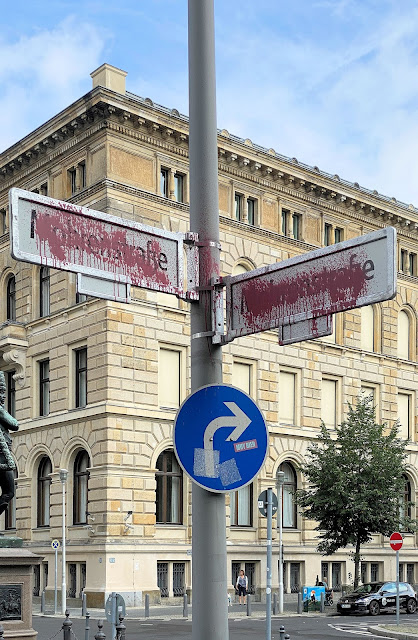 Eventually, in the course of the debate on racism, the district council of Berlin-Mitte decided at the request of the Greens and the Social Democrats to rename the street to Anton-Wilhelm-Amo-Straße. The Berlin Postkolonial Association welcomed the decision "as an internationally visible sign against racism in public space and as an overdue tribute to an outstanding personality of African origin in Germany".
Anton Wilhelm Amo was the first well-known jurist and philosopher of African origin in Germany. Born around 1700 in what is now Ghana, Amo was abducted from Africa as a small child by the Dutch East India Company in the early 18th century, was brought to Europe, and "given away" to Duke Anton Ulrich zu Braunschweig und Lüneburg and his son. The Hofmohr (Moore of the court) learned several languages, studied law and philosophy, and received his doctorate in Halle in 1729, defending his disputation on the "Rights of Black People in Europe". Later he taught at the famous Prussian universities of Halle and Jena, but in Wittenberg too. After a racist smear campaign, he returned to his homeland around 1747.

The renaming of the street with the name of an outstanding black academic is a genius idea for it keeps the memory of the old name Mohrenstraße latently alive.
Eingestellt von Red Baron um 17:14