Left alone in his fight against the invading Swedes, the so-called "Great Elector" achieved an unexpected and decisive victory in the Battle of Fehrbellin where he learned a lesson: "Alliancen seindt zwahr gutt, aber eigene Krefte noch besser, darauff kan man Sich sicherer verlassen, undt ist ein herr in keiner consideration, wan er selbst nicht mittel und volck hätt, den das hatt mich, von der zeitt das Ichs also gehalten, Gott sey gedanckt considerabell gemacht (Alliances are good, but one's own force is better; one can rely on it more surely. A ruler has no consideration if he does not have the means and people. Since I have held it this way, it has made me thank God, a considered man)." During his reign, Frederick William increased Prussia's standing army from 3,000 to 30,000 men.
His grandson Frederick William I (August 14, 1688 – May 31, 1740), King in Prussia and Elector of Brandenburg, better known as the Soldatenkönig, made the Prussian army one of the most powerful in Europe. The Soldier King's only concern was the integrity of the widely scattered Prussian territory, which he wanted to defend with a strong standing army that he increased from 38,000 to 83,000 men during his reign.
Frederick William loved his soldiers, frequently calling them his "children". Consequently, he cherished and spared them throughout his life, so that he went down in history as roi militaire et pacifiste (military and pacifist king). This was particularly true for his long guys. In the procurement of his Blue Children (minimum height of 1.88 meters) the otherwise miserly king spared no expense.
Enter Frederick II (January 24, 1712 – August 17, 1786) better known as Frederick the Great. Later he was nicknamed Der Alte Fritz ("The Old Fritz") by the people. As a crown Prince Frederick wrote in his Antimachiavell of 1739: Der Krieg ist ein solcher Abgrund des Jammers, sein Ausgang so wenig sicher und seine Folgen für ein Land so verheerend, dass es sich die Landesherren gar nicht genug überlegen können, ehe sie ihn auf sich nehmen ... Ich bin überzeugt, sähen die Könige einmal ein schonungsloses Bild von all dem Elend des Volkes, es griffe Ihnen ans Herz (War is such an abyss of misery, its outcome so uncertain and its consequences so devastating for a country that the rulers of the land should think more than twice before taking up war... I am convinced that if the kings would once see a merciless picture of all the misery of the people, it would touch their heart). Frederick also introduced himself well to his subjects when by cabinet order he abolished torture as an instrument of truth-finding in Prussia shortly after his accession to the throne in 1740 - except in cases of treason and crimes against the majesty. A peaceful future for Prussia seemed assured.
But in December 1740, the 28-year-old Frederick of Prussia launched the first War of the Austrian Succession or Silesian War against the even younger 23-year-old Maria Theresa (1740-1780) of Austria. The king explains in his memoirs: Ich war im Besitz schlagfertiger Truppen, eines gut gefüllten Staatsschatzes und von lebhaftem Temperament: das waren die Gründe, die mich zum Kriege mit Therese von Österreich, Königin von Böhmen und Ungarn bewogen ... Der Ehrgeiz, mein Vorteil, der Wunsch, mir einen Namen zu machen, gaben den Ausschlag, und der Krieg wurde beschlossen (I was in possession of powerful troops, a well-filled treasury, and a lively temperament: these were the reasons that led me to war with Therese of Austria, Queen of Bohemia and Hungary ... Ambition, my advantage, the desire to make a name for myself were the decisive factors, and the war was decided).
Fritz, a fife and a poet – as his father used to call him - had changed into one of the greatest warmongers in history. Friedrich Schiller as a historian remarked: Ich kann den Kerl nicht lieb gewinnen (I cannot love this guy).
In all his wars, Frederick had his helpers. Five of them cast in bronze decorate the Zieten square near the subway station Mohrenstraße in Berlin.
The oldest of the five is Kurt Christoph, Graf von Schwerin (October 26, 1684 – May 6, 1757) who was as a Generalfeldmarschall, one of the leading commanders under Frederick the Great. Serving in the Dutch army Count Schwerin had a military career before he became a lieutenant-colonel in the army of the duke of Mecklenburg-Schwerin in 1707, Later he was with Charles XII of Sweden and was made a major-general. He joined the Prussian army became lieutenant-general in 1734 and general of infantry in 1739. He participated in the Silesian Wars and during the third campaign joined Frederick at Prague in 1757. Wikipedia describes his hero's death: On May 6 followed the Battle of Prague; leading on a regiment of the left-wing to the attack with its color in his hand, von Schwerin shouted "Let all brave Prussians follow me!" after which he was struck and killed by a cannonball. 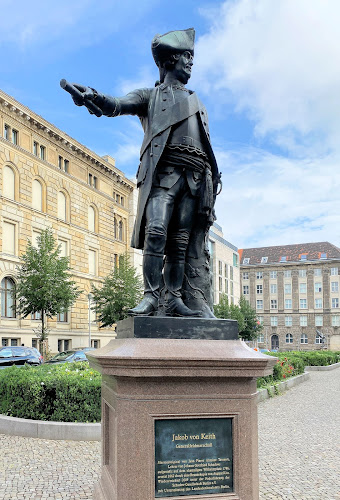 James Francis Edward Keith (June 11, 1696 – October 14, 1758) was a Scottish soldier and a Jacobite taking part in a failed attempt to restore the Stuart Monarchy in Britain. Wikipedia further knows: When this failed, he fled to Europe, living in France, and then Spain. He joined the Spanish and eventually the Russian armies and fought in the Anglo-Spanish War and the Russo-Swedish War. In the latter, he participated in the conquest of Finland and became its viceroy. Subsequently, he participated in the coup d 'état that put Elizabeth of Russia on the throne. He later served in the Prussian army under Frederick the Great, as Generalfeldmarschall, where he distinguished himself in several campaigns. He died during the Seven Years' War at the Battle of Hochkirch. 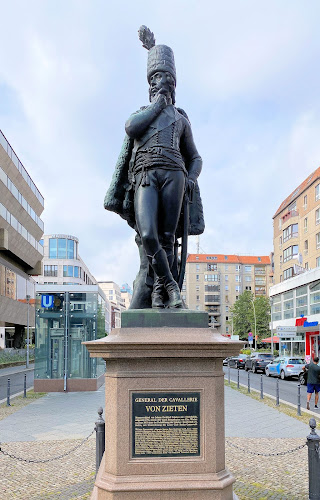 Hans Joachim von Zieten (May 14, 1699 – January 26, 1786), also known as Zieten aus dem Busch, was a cavalry general during the reign of Frederick the Great at the Battles of Hohenfriedberg and most particularly at Torgau. When the battle seemed already lost, he came out of the bushes with his horsemen, conquered the Austrian main battery, and had their cannons turned against them. That brought the decision. After engaging in a reputed 74 duels, and fighting in four wars, he died in his bed at the age of 86. 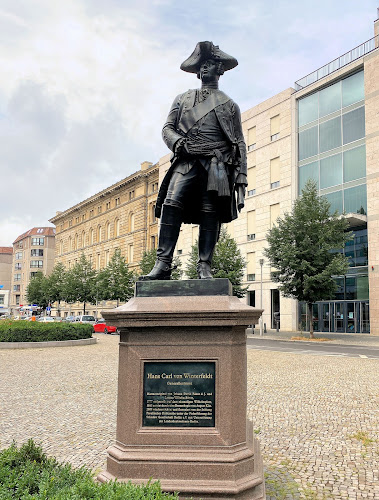 Hans Karl von Winterfeldt (April 4, 1707 – September 8, 1757), served as a general under Frederick the Great. In Wikipedia, we read: As one of the king's trusted confidantes and advisors, he had considerable autonomy on the available staff. Winterfeldt developed the first "modern" program of military intelligence gathering. He negotiated the Convention of Westminster in which Britain and Prussia aligned their interests. Winterfeldt fell victim to his own bravery in a skirmish at Moys near Görlitz, on September 7, 1757. His wound proved fatal, and he died on September 8. 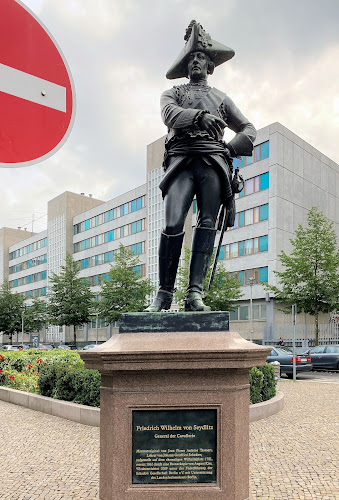 Friedrich Wilhelm Freiherr von Seydlitz (February 3 1721 – November 8 1773[1]) was a Prussian cavalry general. He became legendary throughout the Prussian Army both for his leadership and for his reckless courage. Wikipedia knows: During the Seven Years' War at the Battle of Rossbach, his cavalry was instrumental in routing the French and Imperial armies. His cavalry subsequently played an important role in crushing the Habsburg and Imperial left flank at the Battle of Leuthen. Seydlitz was wounded in battle several times. After the Battle of Kunersdorf in August 1759, he semi-retired to recover from his wounds, charged with the protection of the city of Berlin. Von Seydlitz enjoyed the company of women and died from syphilis at Ohlau in Silesia in November 1773.
For my American friends, the name of Friedrich Wilhelm August Heinrich Ferdinand Freiherr von Steuben (September 17, 1730 – November 28, 1794) rings a bell. 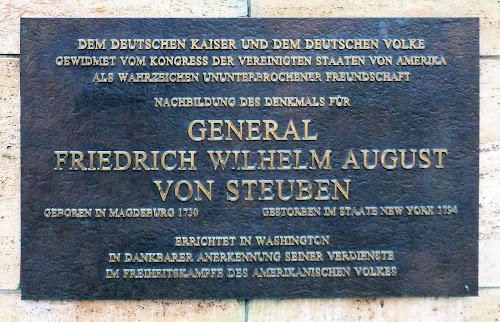 Baron von Steuben started as a Prussian and later became an American military officer. Wikipedia knows: Von Steuben served as Inspector General and a Major General of the Continental Army during the American Revolutionary War. He was one of the fathers of the Continental Army in teaching them the essentials of military drills, tactics, and discipline. He wrote Regulations for the Order and Discipline of the Troops of the United States, the book that served as the army's drill manual for decades. He served as General George Washington's chief of staff in the final years of the war.

In the Battle of Jena and Auerstedt on October 14, 1806, Napoleon showed the formerly glorious Prussian army off. On his way to Berlin, the emperor took up quarters at the Potsdam City Palace on October 24.
Later, he visited the tomb of Frederick the Great with his generals in the Garrison Church. On this occasion, the emperor ought to have said, "Découvrez-vous Messieurs! S'il était encore vivant, nous ne serons pas ici (Uncover your heads, Gentlemen! If he were still alive, we wouldn't be here)."
And Prussia's Queen Luise lamented, "We have fallen asleep on the laurels of Frederick the Great, who, the master of his century, created a new era. We have not progressed with it, and therefore it overtakes us."
Eingestellt von Red Baron um 22:59