In Germany, following major surgery people are sent to a Reha - short for rehabilitation clinic - where physiotherapists try hard to get you moving again.

Following the replacement of my worn-out hip and remaining one week at the Lorettokrankenhaus I was transported directly to Freiburg‘s Mooswaldklinik thus avoiding any contact with the Corona-infested outside world. During my three weeks at the Reha, absolutely no visits are allowed. The clinic takes no risk with risk patients.

At my arrival I was greeted by fellow sufferers on crutches except that I experiencing balance attacks had a high walker with arm rests supporting me.

Red Baron immediately became known like a bunter Hund (colored dog), i.e., being known all over the place.

The second day a physiotherapist took me secretly aside and showed me how to walk safely with crutches only revealing that all their walking aids were too short. With those Red Baron already being bent bent over even more. 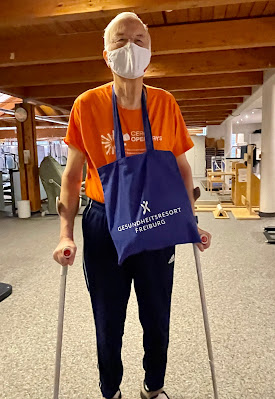 The next day the longer crutches arrived. It was the talk of the hospital. All the various specialists treating various aspects of my hip replacement hailed my new walking aids.
Here is the list of treatments I suffer from morning to afternoon during a normal day and that for a duration of three weeks.

I am still on a full hand of painkiller pills four times a day (those cryptic numbers following the meals in the schedule shown above refer to the various kinds of pills).

This overdosed? medication makes me sleepy during the day when I am not exercising but sleepless during the night.
I am missing my desktop PC. Neither can I modify a Webpage nor dress up my photos.


Success. One full week of treatment have me walk short distances with less pain than before surgery. Most important, I now can fetch my food being no longer dependent being served at the table.

We sit all alone each one at a separate table and must eat fast for food is served in three shifts, Corona oblige.
Eingestellt von Red Baron um 21:27