The Philosophy Is to Stay at Home

Angela Merkel said this wise phrase on December 13 when she and the 16 German governors decided a hard shutdown for the country given the rising number of Corona infections.

And then I came across the following statement: Studies show that female leadership during the COVID-19 pandemic led to more evidence-based, sustainable, inclusive, and effective outcomes; see, e.g., Denmark, New Zealand.
While the Covid-19 infection rates remained low in Germany during the summer holidays, the pandemic picked up the pace with the cold days arriving. 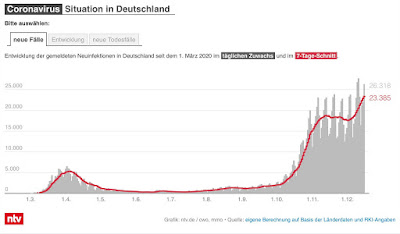 The number of infections started to climb during October in such a way that our government, after long deliberations, installed a "breaker" for the second wave of the pandemic, what some people called a lockdown light. The measures starting on 2 November and supposed to last until the end of the month included the shut down of all restaurants, but retail stores, daycare centers, and schools remained open.

By mid-November, the number of daily infections had started to stabilize, although on a high level. When at the beginning of December, the curve started rising again; governors and chancellor agreed during a video conference on December 13 to step up the country’s lockdown measures valid from December 16 to January 10. The complete lockdown should stop the exponential rise in the number of  Corona cases. 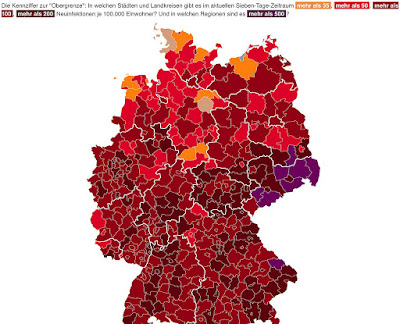 In spring, states in Germany’s east had been spared during the initial Covid-19 outbreak. They now have become the nation’s hotspots. The purple color was introduced to mark infection rates of greater than 500 per week and 100,000 people on the above map in the case of Saxony.

Germany has closed most stores and all schools to further limit social contacts. With the previous lockdown light, the number of contacts was reduced by only 40%. However, a reduction by 70% had been needed to reach the magic figure of 50 new infections averaged over a week per 100,000 inhabitants in a district.

High infection rates will lead to a collapse of intensive care. While there are still enough beds and ventilators, qualified medical personnel is missing.

By the way and what had been predicted: the initial measures of contact limitation combined with the AHAL-rules have reduced the usual number of severe influenza infections by a factor of eight.

Red Baron lived through all these developments in the splendid isolation at the Reha. I was released on Sunday 13 and took a taxi home.
Following 8 weeks of growing, my only worry was to get a haircut before the total shutdown on Wednesday 16. In despair, I called my hairdresser on Monday, and he gave me a "cutting slot" on Tuesday 15 at 6.p.m. I already took a reservation for January 27, not knowing whether hairdressers will be reopened by then.

Last Thursday, December 16, Red Baron went downtown to his pharmacy looking for a body shower lotion I had left behind at the hospital. Limping on crutches into their premises, I benefitted from the free distribution of three FFP2 masks. They are paid by the federal government and are handed out in pharmacies to all people above the age of 60. I simply call them Volksmasken.
Supported by my two crutches I could not take any photos in town. Here are some impressions of deserted Freiburg borrowed from David Lohmüller's© Corona Fotoblog:
To finish my last 2020 blog off, here comes a true German Christmas story. The director of the Institute for Medical Microbiology at the University Hospital in Halle had estimated, "If everyone in a church has masks on and there is a maximum of one person per five square meters in the room, church services at Christmas are acceptable. But only if there is no singing! Otherwise, we have too many aerosols."
Two other eminent German virologists were vexed and wanted to have their finger in the pie too. So one virologist refined, "Even the common creed or the 'Our Father' must be silent - at most the 'Amen' at the end is okay." The other expert demanded that every churchgoer must not only wear a mask but at least an FFP2 type. These masks could be financed through a collection. Isn't it all well organized in my country?

Dear friends, I wish you all a Merry Christmas, stay healthy, and expect 2021 to be a better year than 2020. The city of Freiburg looks forward to 2021, provided:
PS: O no, I just learned that there is a British Mutation of the Wuhan Virus. If it wasn't for the trade, the Brexit now is real with most EU-countries cutting all flights from and to the UK.
Eingestellt von Red Baron um 22:11