On the History of Freiburg‘s Sister Cities

Last fall, two students of the German-French Highschool interviewed the president of the Freiburg-Madison-Gesellschaft and me on the history of Madison, particularly in the previous World War. Even after consultation with knowledgeable friends in our sister city, the information situation remained thin.
Thus Madison is presented at the exhibition on Freiburgs Parnerstädte und ihre Geschichte with only two posters, while the information on places that suffered during the war is documented on three posters.
On May 2, Red Baron took part in the vernissage. 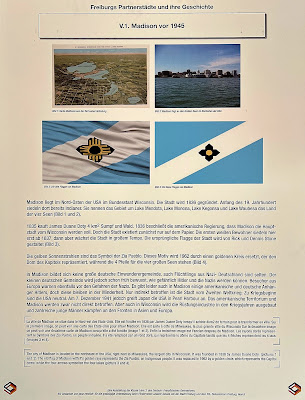 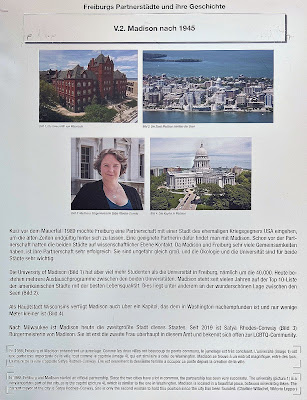 Naturally, the posters about Madison found my interest. Here are the two posters. Click on them to enlarge.
The actuality, however, is with Lviv (Львів), Freiburg‘s battered sister city. Its Austro-German name is Lemberg, Polish Lwów [lvuf], Yiddish לעמבערג, Armenian Լվով [lvov], Russian Львов [lʲvof]. 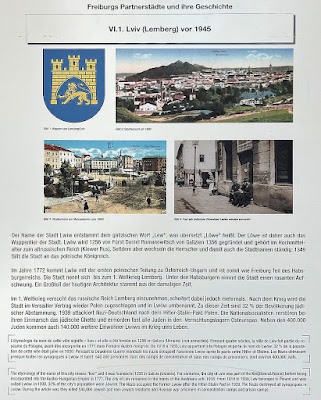 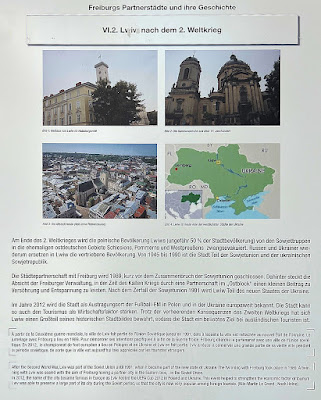 In addition to what is written on the posters, here are Red Baron’s personal observations: 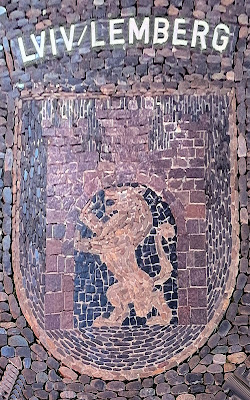 Endowed with royal privileges, Lviv belonged to the Kingdom of Poland from 1349 until the first Polish partition in 1772, when it fell to the Habsburg Monarchy. Lviv became the capital of the Kingdom of Galicia and Lodomeria and the fourth largest city in the multiethnic state. Emperor Joseph II wanted to impose German as the administrative language in his entire realm, although German was already the lingua franca in the blooming city.

From the second half of the 19th century until the end of the First World War, Lemberg was a melting pot of people, with 50% Poles, 20% Ruthenians (Ukrainians), and nearly 30% Jews.
With the Peace treaty of Trianon, Lwów became Polish again. Now Poland's third-largest city, it was a stronghold of Polish culture but remained a focal point of Ukrainian national feeling. However, the Habsburg supranational identity remained present in the background.

With the Hitler-Stalin Pact, Lvov was part of the Soviet Union. After the German army captured the city during World War II, nationalists proclaimed Ukrainian independence. The German occupation nipped these attempts in the bud. Lvov became part of the German General Government instead. The city now functioned again under the name of Lemberg as the capital of the district of Galicia.
After the war, the Russian victors retained the eastern Polish territories and moved the borders westward with the 4th partition of Poland. The Polish residents were resettled in Germany's eastern regions, mainly Silesia.
Russians and especially Ukrainians poured into the annexed territories, where the Ukrainian share of the population increased in recent decades as the Russian share decreased. The fate of the Jews can also be seen in the graph. Almost the entire Jewish population of לעמבערג perished in the Holocaust. Their percentage, which was only 7% in 1950, has further dropped to 0.3% in the wake of an underlying anti-Semitic atmosphere in the Soviet Union. Also, the Polish share of Lwów's population fell below 1%.


As a minor observation, Red Baron read on the poster of Tel Aviv:

Well, there is Betanien, or better Bethanien, a spot in the Holy Land, and there is Brittany, a female forename, but no such word Großbrittanien.

The correct spelling is Großbritannien, but the name is somewhat outdated. It is the German word for the Kingdom of Great Britain (1707-1801), the state after the union of England (one state with Wales) and Scotland.

This construct was followed by the United Kingdom of Great Britain and Ireland (1801-1927). The latter is the predecessor name of the present Vereinigtes Königreich (United Kingdom) since 1927.