Cancel Culture Only in the States?

The term "Cancel Culture" refers to boycotting or shunning a person (often a celebrity and sometimes a person from the past) whose behavior or statements are deemed unacceptable.

Nowadays, cancel culture is often the result of a person's "political incorrectness."

Cancel culture is not about engaging in open debate or factually refuting provocative claims but discrediting their originators.
We watched the downing of monuments to Confederate generals who fought in the American Civil War and were suddenly reduced to their role as slaveholders?

There was no such thing in Germany, or was the demand for smelting the Freiburg Victory Monument erasing the memory of individuals? General August von Werder, for instance?

In fact, cancel culture is a new catchy term for something old. Just think of the burning of books of "un-German" authors by the Nazis. Also, in the 3rd Reich, the fact that Einstein was a Jew was sufficient to brand his theories of relativity as "Jewish Physics." The theories were answered with a "Deutsche Physik."


In Germany, in recent years, it was sometimes sufficient to "cancel" authors or politicians hastily when anti-Semitic statements were found in their writings or speeches.

However, it cannot be denied that during its extended discussions, the working group for the renaming of streets in Freiburg has considered the cases in a differentiated and proportionate manner. They did not make it easy for themselves. Is one politically incorrect statement or action already sufficient to discredit, sorry, cancel a person?

Red Baron still wonders why it was necessary to rename Rennerstraße in Freiburg. Renner who?
Was the street named after the German communist Heinrich "Heinz" Renner (1892-1964), the first mayor of the city of Essen after the end of Nazi tyranny in 1946, or was it named after the father of the Austrian Republics in 1919 and again in 1946 Karl Renner (1870-1950)?

No, it was Johann Jacob Renner. He was a sheriff (Schultheiß) in Freiburg around 1600 and a financial benefactor of the city, but he also sent twelve women to the stake as witches in 1599. Consider that Johann Jacob was forgotten in Freiburg. He did not even have an article on Wikipedia.
That article I wrote when the working group dragged Renner's gruesome deed into the light of day. So, at least he is not canceled on the Internet.

On the contrary, the city wrote about the street renaming - in total twelve - in Freiburg: No historical facts are to be erased. Additional plaques and explanations on the streets keep the past present in the city's public.

However, the general rule is that streets are named after people who are to be given special honors. Even if their other achievements are undisputed, people with criminal views and deeds do not need to be honored in this way.


Anti-Semitism is as old as the Jewish diaspora, and through the centuries, Christians have failed to proselytize or reform the Jews.

Initially, Martin Luther saw missionized Jews as a way to counterbalance the Roman Church. His writing, "That Jesus Christ was born a Jew," bears witness to this. When the reformer failed in his attempt to win over the "unbelieving" Jews, his initial friendliness toward the Jews turned into abysmal hatred in his later writings, "Von den Jüden und jhren Lügen (On the Jews and their lies). "

In a sermon in Eisleben on the day of his death, Luther speaks his last words on the Jewish question: "If they do not convert, we shall not tolerate nor allow them among us. Therefore, always away with them, but if they confess, leave their usury, and accept Christ, we will gladly keep them as our brothers. "

In 1821, Karl von Rotteck, a spokesman in the state parliament, tried to make the total emancipation of the Jews in Baden dependent on their complete assimilation. This included the change of the day of the Sabbath, the abolition of dietary laws, the renunciation of Hebrew, and the purification of the Talmud from "anti-state tendencies." In other words, the Jews were to earn their civil rights through increased integration.

This covert anti-Semitism was enough for the Freiburg City Council to rename the Karl von Rotteck Medal of Merit into the Gertrud Luckner Medal. However, Rotteck's merits as a constitutional lawyer and co-author of the first Baden constitution prevented the Rotteckring from being renamed.

The situation is somewhat different for the proven anti-Semite, the poet, and theologian, Alban Stolz. A street in Freiburg named after him became Denzlinger Straße in October 2020.
However, a culture war broke loose over Stolz's bust in front of the Konviktkirche. Municipal, ecclesiastical authorities, and the State Cultural Office were at loggerheads for a long time until it was finally agreed to move the bust from the public space to the seminary garden, the Collegium Borromaeum. Alban Stolz was only partially canceled.

Let us return to the present. Recently President Putin complained that  Cancel Culture had turned into Culture Cancellation in the West. The names of Tchaikovsky, Shostakovich, and Rachmaninoff would be dropped from concert programs, which is partly true. Russian writers and their works would be banned, which is not true.

Is the cultural bridge broken between Ukrainians and Russians? They fought side by side against Nazi Germany in World War II, paying a heavy toll of blood. 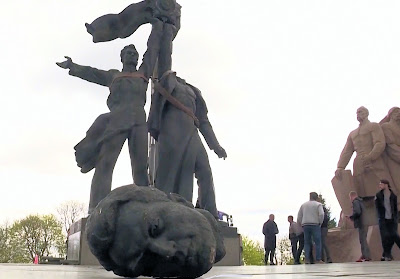