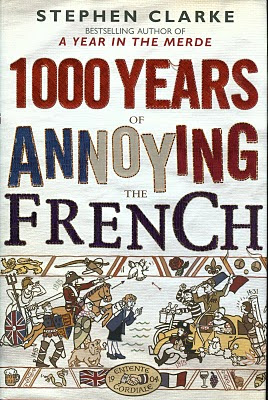 While Simon Winder takes on the Germans, Stephen Clarke digs into the tribulations of the Entente Cordiale between France and Great Britain. In his book 1000 Years of Annoying the French, he picks to pieces the relation between the two countries, starting with William the Conqueror in 1066 and ending with French President Nicolas Sarkozy in 2010.

One critic wrote: If the book is funny for English readers, it becomes downright hilarious for non-English readers; however, I personally find some of Clarke's jokes embarrassingly far-fetched, e. g. when he states: At the start of the 100 years' war France was like a widow on a Caribbean cruise: rich, available and convenient, but Edward III didn't raise enough funds for the invasion and had to shuffle home "like an English pensioner hit by the rising euro."

Otherwise, I learned quite a lot of exciting details, such as Dom Pérignon suffered from excorkulation when the CO2 pressure in the champagne bottles built up. There were explosions too. Thanks to the Brits who made the first rigid bottles in Newcastle, the champagne bottled in France could be shipped across the Channel safely.

Dom Pérignon initially had to calculate with a considerable margin with all those lost bottles. This must be the reason why champagne is so expensive, or have you ever seen a raised price decreasing? In the future, Clarke hopes for better deals in England with the onset of global warming causing ideal champagne-producing conditions shifting north from France towards vineyards with similar soil on the other side of the Channel.

British humorist Sir Pelham Grenville Wodehouse once wrote: There is only one cure for grey hair. It was invented by a Frenchman. It is called guillotine. All wrong, says Clarke: The earliest type of what we mistakenly call the guillotine was probably* invented in Halifax, northern England, a town whose only other claim to innovation is that is was home to confectioner Violet Mackintosh, the woman who invented Rolos and Quality Street toffees. So to be historically accurate, the guillotine should be called: le Halifax, which would actually have been quite fun because 200-odd years later, the Académie française would probably still be debating whether to allow the verb halifaxer.
*There are also records of guillotine machines in Ireland in 1307 and in Scotland in 1564.

In 1914, when the first British troops disembarked in France to help the Frogs against the Kaiser, His Majesty's government had carefully chosen Scottish Highlanders playing the Marseillaise on their bagpipes. This was to remind the French of their all-time favorite Brit, Mary, Queen of Scots, rather than offending their ego with their old enemy England invading them again.
However, the Entente did not last long when more important contingents of those snobbish British soldiers accustomed to treating their inferiors in a colonial way arrived in France. As they extended this practice to the primarily rural population, the French took revenge on the rosbifs regarding them as welcome meal tickets. Their vehicles were the local estaminets (pubs), where for a high price, they sold muddy water as beer, a red wine made from vinegar and red ink, and white wine made from vinegar, leaving out the red ink.

At the beginning of the war, when the Germans following the Schlieffen Plan blitzed through Belgium, the Tommies soon came under pressure: In retreat, the Brits resorted to their old pillaging tactics, emptying orchards, helping themselves to chickens, eggs, and milk, and stealing coal or ripping down whole farm buildings for firewood. It was the Hundred Years War all over again.

Reading this I remembered a passage in Paul von Hindenburg's memoirs that I had heretofore regarded as wishful thinking. Did the old man (78) correctly recall what happened at the Western front in 1918?: Ballten sich doch Fäuste französischer Soldaten vor unseren Augen unter Schimpfworten gegen den englischen Bundesgenossen. Riefen doch französische Stimmen zu uns herüber: „Heute mit England gegen Euch, morgen mit Euch gegen England!“ (Before our very eyes French soldiers shook their fists at their English allies while calling them names. French voices shouted in our direction: "Today with England against you, tomorrow together with you against England").

I have encountered my share of anti-British sentiment too. Once when conversing with a French friend, we came close to the delicate topic of German atrocities committed against la resistance in France during the last war. He probably wanted to comfort me when he said: Manfred, you well know who our arch-enemy is. His remark did not console me at all. On the contrary, I felt deeply embarrassed and had no reply.

Apart from Petit Napoleon, Clarke's favorite French target is the tall General, although one originated from Corsica and the other from Lorraine. Churchill had his opinion about De Gaulle as being fascist-minded, opportunistic, unscrupulous, ambitious to the last degree, while Mon General asserted: England, like Germany, is our hereditary enemy.

As far as Germany is concerned, De Gaulle must have changed his mind soon after the war. I remember standing there at Munich's Odeonsplatz in the crowd that hailed the General in 1964 when he shouted in his guttural German: Für Ihr großes deutsches Volk, jawohl!
The General's emphatic yes resulted in ecstatic cheers from the crowd. After all those humiliations in the past, the German people did not notice that they were being manipulated. Did those present really think they were suddenly recognized or even loved?

France and Germany have finally grasped that violence is no solution should problems arise. Is it already love when De Gaulle embraces Adenauer in Reims, Kohl and Mitterrand are holding hands* in Verdun, and Sarkozy kisses Merkel in Paris and Berlin?

Not only do my French friends know that I am a Francophile. Let me add here: in all my encounters with French men and women, I have never sensed even the slightest anti-German sentiment.
*
Eingestellt von Red Baron um 15:34