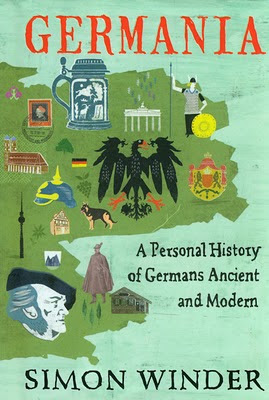 In my free time - of which as a retired person I do not have much or should I rather say much left - I read quite a lot. When visiting a foreign country, roaming the bookshops is a must. There I am always looking for the odd reading stuff you do not easily find in Germany. Recently at Füssli's in Zürich, two witty books written by two Brits attracted my attention. I like British humor, although I probably understand only half of it. In the following, I shall concentrate on Simon Winder's book Germania in which, as the title correctly suggests, the author criticizes my country. Mind you, most of his observations are not negative. As a person who keeps claiming to be in love with this country throughout the book, Winder has his favorite German characters and places. Alexander von Humboldt is his God, and he admires the prince-bishop's Würzburg Residence in Baroque style with ceiling paintings by Giambattista Tiepolo. How can it be that Winder, who has traveled all over Germany and visited so many places, mentions several times that he does not speak a word of German? Is he, as a British subject, proud of it, or is it just an understatement?

Throughout the book, Winder fights stereotypes like the one about German food. It indeed generally is heavy although varied because cooking in Germany is regional. In fact, Sauerkraut is the specialty in Alsace, but that is no German territory.

He rightly points out Germany's obsession for the Middle Ages when the world still was in order. You find places like Quedlinburg with its neat timber-framed houses located at the foot of the Harz Mountains. The Abbey Church holds the grave of Emperor Heinrich the Fowler. He was reburied there in 1930 by another Heinrich (Himmler), who at the same time desecrated the church, turning it into an SS shrine of which the counter clerk only hesitantly shows a blurred black and white photo on demand.

Beautiful Marburg is another city with a broken history. Saint Elisabeth of Hungary married Ludwig of Thuringia and lived at the Wartburg until the count perished in the 1227 crusade. She was badly treated by her husband's kinfolk, so she moved to Marburg, where she died in 1231 as a widow aged only 24. She was buried there in a Church the Teutonic Order built for her. Later in 1410, the Poles crushed the Knights in the Battle of Tannenberg and stopped Germanic expansion into the East. The church in Marburg also became the final resting place for Paul von Hindenburg, the victor of the second Battle of Tannenberg fought in the First World War against the Czar's army. It was he who, as Reichspräsident of the Weimar Republic, eventually made Hitler Chancellor in 1933, only to die a little later not seeing what disaster his decision led to.

While reading the pages dealing with old history generally is fun, Winder's entry into the beginning of the 20th century is gloomy. Here I quote what he writes about the end of the First World War: In 1919 ... many among the Allies saw it as an amazing opportunity that so formidable a competitor had been knocked out, apparently forever. This was reflected in the Treaty of Versailles, which among many other things, saddled Germany with dizzying 'reparations', a hugely inflated version of what the Germans had done to France in 1871. The justification was based around German' war guilt' — a disastrous piece of victor's justice which both absolved the Allies for all responsibility for 1914 and which rang completely untrue within Germany, thereby fermenting further a sense of almost overwhelming grievance across an alarming cross-section of society. This is undoubtedly one reason why Germany followed the Pied Piper of Braunau but there was more in the pipe that Winder simplifies in just one phrase: This layer upon layer of catastrophe - the war, the Versailles Treaty, hyper-inflation, the Depression - provided so many individual German families with reasons to have collective nervous breakdowns that there is no point in hunting for deeper roots.

In his conclusion, Winder starts to harp on Nazi-Munich, but he must admit that all temples of the Third Reich in the city are long gone except for the Hofbräuhaus. Sitting there over his, as he thought, last stone of beer, he observed a Japanese businessman or tourist paying the oompah band for the right to conduct it for one piece of music. To pay the band for conducting is current practice in Bavaria. But the Japanese man was a genius, as he asked them to play Shostakovich's Waltz Number 2, known from the movie Eyes Wide Shut. Winder must have kept his Eyes Wide Open when he concludes: Here, in one of the birthplaces of Nazism, a traditional Bavarian band was playing an American jazz-inflected piece by a Soviet composer, made famous by a Jewish-American (Stanley Kubrick) adaptation of a Jewish-Austrian (Arthur Schnitzler) novella, the film's stars being a tiny Scientologist (Tom Cruise) and a lovely Australian (Nicole Kidman). It would be trivial to say that this music buried the past even for a second, but it was enjoyable to tot up the number of ways in which the famous pre-war frequenters of the Hofbräuhaus would have been struck dumb with rage by such a piece. Suddenly I felt aware of how much Germans had themselves put layer upon layer of work, culture, and thought on top of their terrible past and that it was possible to sit in the chaos of the early twenty-first Century and feel that actions are being taken every day - even by an oompah band and its drunken Japanese maestro - to build a replenished world in which Munich can be more than just the cradle of Nazism. But the band was now playing 'The Bonnie Banks o' Loch Lomond', and it was time to take the ill-judged decision to have another drink.
*
Eingestellt von Red Baron um 17:02