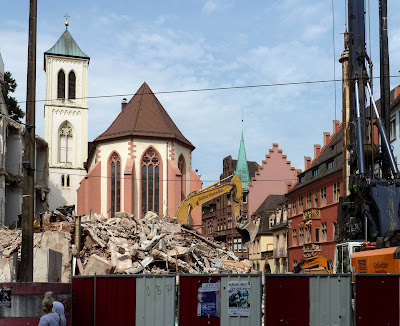 This quite recent photo gives an unusual view on Freiburg's St. Martin church. The shot became possible because on Kaiser-Joseph-Straße the Municipal Saving Bank is tearing down one of its buildings to construct a new one. However, before they could start there was a big controversy because many citizens thought the old front face was more beautiful than the new one and fitted better to the style of the neighbouring buildings. Eventually the construction plans had to be modified and construction could start. Now Freiburgers stand on Kaiser-Joseph-Straße where you cannot tell whether they are watching the working of the shredding machines or are admiring the view on the buildings behind. On the right you catch a glimpse of the Haus zum Walfisch (House of the Whale) known for its most famous renter Erasmus of Rotterdam who lived there from 1529 to 1531. Some Freiburgers have a dream and sent a petition to the bank's CEO "not to construct the new building". Keeping the charming view open will be another Freiburg attraction. 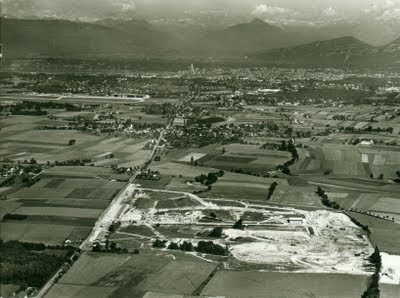 The second rather old photo, dated June 15, 1955, I recently received by snail mail. A lady who participated in an excursion to Geneva in early summer including a visit to CERN (my former working place) seemed to have been so much impressed that she wanted to express her thanks. She had received this postcard in 1958 from her friend Mrs. Citron, wife of Professor Citron, one of CERN's founding fathers. The photo in black and white shows an aerial view of the accelerator site under construction located west of the village of Meyrin at the Swiss-French border. There is practically no building up but bulldozers are preparing the ground for the 600 meter ring tunnel of the Proton Synchrotron (PS). The PS is still working as a proton injector for the Large Hadron Collider (LHC). Nothing is seen either of the heap of dirt that served as radiation shield for the PS-target area later and called Mont Citron. In the far distance the Alps are visible. The mountain between the city of Geneva and the Alps is the Salève. Left to the famous Jet d'eau stretches the Lake of Geneva. The road leading from CERN to the city is still called Route de Meyrin cutting the same-named village in two. The Geneva airport did not change much except for a longer runway reaching up to the Route de Meyrin and a completely new reception building.
Eingestellt von Red Baron um 16:58